The FIBA Women's World Ranking is the FIBA's rankings of national women's basketball teams. FIBA ranks women's national teams in both senior and junior competitions. It also publishes combined rankings for all competitions involving both sexes.

Since November 2019, FIBA uses a game-based system similar to the men's ranking.

FIBA still uses the competition-based system to determine its women's rankings. As noted above, this system was also used to determine men's rankings prior to 2017. FIBA has announced that it will introduce a game-based ranking procedure similar to that currently used for men's rankings in the indeterminate future. [2]

FIBA uses a weighted arithmetic mean to determine the statistical weight of each of the tournaments. Each event is assigned point weight that is based partly on how competitive the tournament is and partly on which national teams are participating: [3]

As opposed to football tournaments, teams still have to go through a series of consolation and classification rounds even if they've been eliminated from title contention, so that a complete ranking of the teams will be possible. [3]

The calculations are done after the tournaments stated above in a group of two Olympic cycles (8 years). The oldest tournament outside the 8-year period is discarded and replaced with the newest competition. [3]

This means that in every computation, there are:

The United States' 1000.0 points were calculated by this method:

The USA Basketball Men's National Team, commonly known as the United States men's national basketball team, is the most successful team in international competition, winning medals in all nineteen Olympic tournaments it has entered, including sixteen golds. In the professional era, the team won the Olympic gold medal in 1992, 1996, 2000, 2008, 2012, 2016, and 2020. Two of its gold medal-winning teams were inducted to the Naismith Memorial Basketball Hall of Fame in August 2010: the 1960 team, which featured six Hall of Famers, and the 1992 "Dream Team", featuring 14 Hall of Famers. The team is currently ranked first in the FIBA World Rankings.

Basketball contests at the 1984 Summer Olympics was the eleventh appearance of the sport of basketball as an official Olympic medal event. It took place at The Forum in Inglewood, California, United States from July 29 to August 10. The United States won the gold medal in both events, the first in the women's team history. Due to the boycott, the Soviet Union and Hungary withdrew from the tournament. The former, having already qualified for both events was replaced by West Germany in the men's competition, while both nations' women's teams were replaced by Australia and South Korea.

The FIBA Men's World Ranking are FIBA's rankings of national basketball teams. FIBA ranks both men's and women's national teams for both senior and junior competitions. It also publishes combined rankings for all mixed-sex competitions.

The Russian Federation competed at the 2008 Summer Olympics, held in Beijing, China, represented by the Russian Olympic Committee. Russia competed in all sports except baseball, football, field hockey, softball and taekwondo.

Basketball at the 2012 Summer Olympics was the eighteenth appearance of the sport of basketball as an official Olympic medal event. It was held from 28 July to 12 August 2012. The preliminary matches and the women's quarterfinal matches were played in the new Basketball Arena in Olympic Park, which seated up to 12,000 spectators. The men's knockout games and the women's games, from semifinals onward were played in the North Greenwich Arena.

The International Basketball Federation is an association of national organizations which governs the sport of basketball worldwide. Originally known as the Fédération Internationale de Basketball Amateur, in 1989 it dropped the word amateur from its name but retained the acronym. 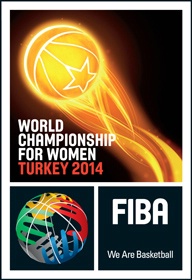 The 2014 FIBA World Championship for Women, the 17th edition of FIBA's premier international tournament for women's national basketball teams, was held in Ankara and Istanbul, Turkey from 27 September to 5 October 2014.

The 2018 FIBA Women's Basketball World Cup, the 18th edition of FIBA's premier international tournament for women's national basketball teams, was held in Tenerife, Canary Islands, Spain from 22 to 30 September 2018. This was the first edition to use the name of FIBA Women's Basketball World Cup. After the last edition in 2014, FIBA changed the name of the competition from the FIBA World Championship for Women, in order to align its name with that of the corresponding men's competition.

Serbia competed at the 2020 Summer Olympics in Tokyo. Originally scheduled to take place from 24 July to 9 August 2020, the Games were postponed to 23 July to 8 August 2021, due to the COVID-19 pandemic. It was the nation's fifth appearance at the Summer Olympics as an independent nation.

Iran competed at the 2020 Summer Olympics in Tokyo. Originally scheduled to take place during the summer of 2020, the Games were postponed to 23 July to 8 August 2021, because of the COVID-19 pandemic. Since the nation's debut in 1948, Iranian athletes have attended every edition of the Summer Olympic Games, with the exception of the 1980 and 1984 Summer Olympics which they boycotted. Iran has participated in 16 Olympics so far.