Last updated August 25, 2021
This article is about a pledge of allegiance. For the journalist, see Mick Fealty. For the novel by Niven and Pournelle, see Oath of Fealty (novel).

An oath of fealty, from the Latin fidelitas (faithfulness), is a pledge of allegiance of one person to another.

In medieval Europe, the swearing of fealty took the form of an oath made by a vassal, or subordinate, to his lord. "Fealty" also referred to the duties incumbent upon a vassal that were owed to the lord, which consisted of service and aid. [1]

One part of the oath of fealty included swearing to always remain faithful to the lord. The oath of fealty usually took place after the act of homage, when, by the symbolic act of kneeling before the lord and placing his hands between the hands of the lord, the vassal became the "man" of the lord. Usually, the lord also promised to provide for the vassal in some form, either through the granting of a fief or by some other manner of support. [2] Typically, the oath took place upon a religious object such as a Bible or saint's relic, often contained within an altar, thus binding the oath-taker before God. Fealty and homage were key elements of European feudalism.

Fealty is distinct from other parts of the homage ceremony, and is usually used only to refer to that part of the ceremony where the vassal swore to be a good vassal to his lord. [3]

In medieval Europe, an oath of fealty (German: Lehnseid) was a fundamental element of the feudal system in the Holy Roman Empire. It was sworn between two people, the feudal subject or liegeman (vassal) and his feudal superior (liege lord). The oath of allegiance was usually carried out as part of a traditional ceremony in which the liegeman or vassal gave his lord a pledge of loyalty and acceptance of the consequences of a breach of trust. In return the liege lord promised to protect and remain loyal to his vassal. This relationship formed the basis of landholding, known as feudal tenure, whereby the seizin vested in the tenant (the vassal) was so similar to actual possession that it was considered a separate estate described as utile domain ( dominium utile ), literally "beneficial ownership", whereas the landlord's estate was referred to as eminent domain or superiority ( dominium directum , lit. "direct ownership").

In the Late Middle Ages, the investiture and oath of fealty were invariably recorded by a deed; in modern times this replaced the traditional ceremony. Where the geographical distance between the two parties was significant, the lord could name a representative before whom the oath was to be sworn.

The whole contract including the oath of fealty was part of a formal commendation ceremony that created the feudal relationship. [2]

The term is also used by English-speakers to refer to similar oaths of allegiance in other feudal cultures, as with medieval Japan, as well as in modern organized crime. 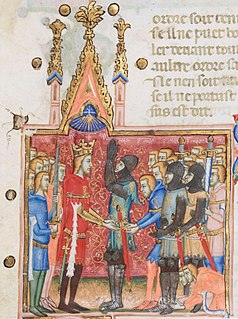 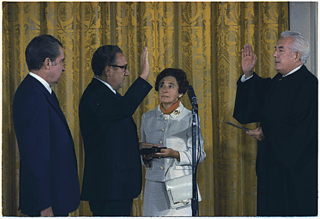 Traditionally an oath is either a statement of fact or a promise with wording relating to something considered sacred as a sign of verity. A common legal substitute for those who conscientiously object to making sacred oaths is to give an affirmation instead. Nowadays, even when there is no notion of sanctity involved, certain promises said out loud in ceremonial or juridical purpose are referred to as oaths. "To swear" is a verb used to describe the taking of an oath, to making a solemn vow. 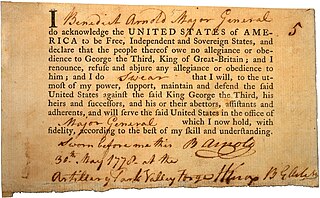 An oath of allegiance is an oath whereby a subject or citizen acknowledges a duty of allegiance and swears loyalty to monarch or country. In republics, modern oaths are sworn to the country in general, or to the country's constitution. For example, officials in the United States, a republic, take an oath of office that includes swearing allegiance to the United States Constitution. However, typically in a constitutional monarchy, such as in the United Kingdom, Australia and other Commonwealth realms, oaths are sworn to the monarch. Armed forces typically require a military oath.

A commendation ceremony (commendatio) is a formal ceremony that evolved during the Early Medieval period to create a bond between a lord and his fighting man, called his vassal. The first recorded ceremony of commendatio was in 7th century France, but the relationship of vassalage was older, and predated even the medieval formulations of a noble class. The lord's "man", might be born unfree, but the commendatio freed him.

Examples of feudalism are helpful to fully understand feudalism and feudal society. Feudalism was practiced in many different ways, depending on location and time period, thus a high-level encompassing conceptual definition does not always provide a reader with the intimate understanding that detailed historical examples provide. 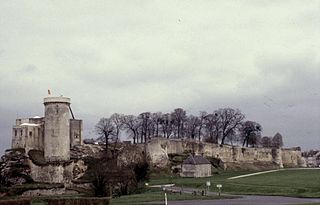 The Treaty of Falaise was a forced written agreement made in December 1174 between the captive William I, King of Scots, and Henry II, King of England.

Fēngjiàn was a political ideology and governance system in ancient China, whose social structure formed a decentralized system of confederation-like government based on the ruling class consisting of the Son of Heaven (king) and nobles, and the lower class consisting of commoners categorized into four occupations. The system dated back at least to the Shang dynasty, but was formally coined during the Western Zhou dynasty when the Zhou kings enfeoffed their clan relatives and fellow warriors as vassals. Through the fengjian system, the king would allocate an area of land to a noble, establishing him as the de facto ruler of that region and allowing his title and fief to be legitimately inherited by his descendants. This created large numbers of local domains, which became autonomous states.

Carucage was a medieval English land tax enacted by King Richard I in 1194, based on the size—variously calculated—of the taxpayer's estate. It was a replacement for the danegeld, last imposed in 1162, which had become difficult to collect because of an increasing number of exemptions. Carucage was levied just six times: by Richard in 1194 and 1198; John, his brother and successor, in 1200; and John's son, Henry III, in 1217, 1220, and 1224, after which it was replaced by taxes on income and personal property. 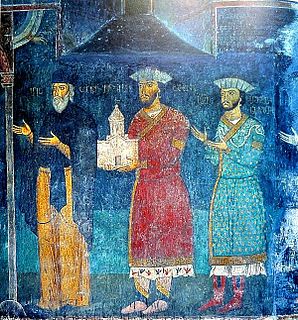 Dominium directum et utile is a legal Latin term used to refer to the two separate estates in land that a fief was split into under feudal land tenure. This system is more commonly known as duplex dominium or double domain. This can be contrasted with the modern allodial system, in which ownership is full and not divided into separate estates—a situation known as dominium plenum "full ownership".

Feudalism as practised in the Kingdom of England during the medieval period was a state of human society that organized political and military leadership and force around a stratified formal structure based on land tenure. As a military defense and socio-economic paradigm designed to direct the wealth of the land to the king while it levied military troops to his causes, feudal society was ordered around relationships derived from the holding of land. Such landholdings are termed fiefdoms, traders, fiefs, or fees.

Love service is a ritualized form of male love-devotion toward women, especially noble women, that was popularized in the Middle Ages.

Pledge of allegiance of one person to another
This page is based on this Wikipedia article
Text is available under the CC BY-SA 4.0 license; additional terms may apply.
Images, videos and audio are available under their respective licenses.