The Chief Justice of the Federal Court is James Allsop.

The Federal Court has no inherent jurisdiction. Its jurisdiction flows from statute. [1] [2] The Court's original jurisdiction include matters arising from Commonwealth legislation such as, for example, matters relating to taxation, trade practices, native title, intellectual property, industrial relations, corporations, immigration and bankruptcy. [3] [4]

It also has the power to interpret the Constitution. [9] 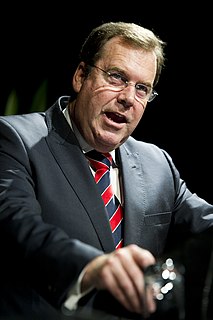 Robert Bruce McClelland is an Australian judge and former politician who has served on the Family Court of Australia since 2015. He was previously Attorney-General of Australia from 2007 to 2011, and a member of the House of Representatives from 1996 to 2013, representing the Labor Party.

Australian labour law concerns Commonwealth, state, and common law on rights and duties of workers, unions and employers in Australia. Australian labour law has a dual structure, where some employment issues and relationships are governed by Commonwealth laws, and others are governed by state and territory laws or the common law. It shares a heritage with laws across the Commonwealth of Nations, UK labour law and standards set by the International Labour Organization, the Australian legislature and courts have a built a comprehensive charter of rights at work.

Section 51 of the Constitution of Australia enumerates the legislative powers granted to Federal Parliament. When the six Australian colonies joined together in Federation in 1901, they became the original States and ceded some of their powers to the new Commonwealth Parliament. There are 39 subsections to section 51, each of which describes a "head of power" under which the Parliament has the power to make laws.

The Commonwealth Court of Conciliation and Arbitration was an Australian court that operated from 1904 to 1956 with jurisdiction to hear and arbitrate interstate industrial disputes, and to make awards. It also had the judicial functions of interpreting and enforcing awards and hearing other criminal and civil cases relating to industrial relations law.

The Supreme Court of Norfolk Island is the superior court for the Australian territory of Norfolk Island. It has unlimited jurisdiction within the territory in civil matters and hears the most serious criminal matters. It also has jurisdiction over the Coral Sea Islands Territory. All matters are heard before a single judge, including appeals from the Court of Petty Sessions. In the Australian court hierarchy, it is one of eight state and territory Supreme Courts having unlimited jurisdiction in their respective parts of Australia. Appeal lies to the Federal Court of Australia, from which an appeal by special leave can be made to the High Court of Australia.

The Western Australian Industrial Relations Commission, as constituted under the Industrial Relations Act 1979, conciliates and arbitrates industrial disputes, sets conditions of employment and fixes wages and salaries by making industrial awards, approves enterprise agreements and decides claims of unfair dismissal in the State of Western Australia, with respect to those employers not regulated by the Commonwealth of Australia under the Fair Work Act 2009.

Australian Boot Trade Employees Federation v Whybrow & Co, commonly known as Whybrow's case or the Boot Trades case was the third of a series of decisions of the High Court of Australia in 1910 concerning the boot manufacturing industry and the role of the Commonwealth Court of Conciliation and Arbitration in preventing and settling industrial disputes. In doing so the High Court considered the constitutional power of the Federal Parliament to provide for common rule awards and the jurisdiction of the High Court to grant prohibition against the Arbitration Court. The majority held in Whybrow that the Arbitration Court could not make an award that was inconsistent with a State law, but that different minimum wages were not inconsistent as it was possible to obey both laws. In Whybrow the High Court established the doctrine of ambit, with the emphasis on the precise claim made and refused, and the practice with respect to "paper disputes" being treated "prima facie as genuine and real", with the majority holding that the High Court had power to order prohibition to correct jurisdictional error as part of its original jurisdiction. Finally in Whybrow the High Court unanimously held that the Federal Parliament had no constitutional power to provide for common rule awards.

Federated Sawmill Employees Association v James Moore & Sons Pty Ltd, commonly known as the Woodworkers case or the Sawmillers case was a decision of the High Court of Australia in 1909 concerning the question whether the Commonwealth Court of Conciliation and Arbitration could make an award that was inconsistent with a State wages board determination. The High Court was divided 2:2 and thus the decision of the Chief Justice prevailed, in what is sometimes described as a statutory majority. Griffith CJ, O'Connor J agreeing, held that the Arbitration Court could not make an award that was inconsistent with the minimum wages fixed by a Wages Board under a State law.

The Commonwealth Industrial Court, known as the Australian Industrial Court from 1973, was a specialist court to deal with industrial matters, principally the enforcement of awards and orders of the Commonwealth Conciliation and Arbitration Commission. Over time it took on more matters and its judges were allocated a wide range of judicial tasks until it was replaced in 1977 by the Federal Court of Australia which had a more general jurisdiction covering matters arising under Australian federal law.

The Industrial Relations Court of Australia was a short-lived Chapter III Court whose jurisdiction was transferred from the Federal Court in 1994, and transferred back in 1997. In the words of former Chief Justice Robert French, "The tide went in, the tide went out". Every judge had a concurrent appointment in the Federal Court. Despite the transfer of jurisdiction, any existing matter or appeal from an existing matter remained in the Industrial Relations Court of Australia, with the result that the last case was not finally disposed of until 2005/6. The Court was not to be abolished until after the last judge had retired. The last judge to retire was Anthony North on 11 September 2018. The court will be formally abolished on 1 March 2021.