The Supreme Court of Queensland was founded on 7 August 1861, with the assent of the Supreme Court Constitution Amendment Act 1861 (Qld). Two subsequent pieces of legislation, including the Additional Judge Act 1862 (Qld) and the Supreme Court Act 1863 (Qld), were also necessary to establish the court's operating system. [2]

Although the Brisbane Supreme Court initially served the needs of the entire colony of Queensland, it did not occupy a purpose-built building until 1879. Until then, the Brisbane Court sat at the Old Convict Barracks in Queen Street. These barracks were in disrepair and a number of improvements, including new sets of windows, had to be constructed to allow the continued sitting of the Court. Furthermore, on Sundays, the area of the barracks used by the Court was also used as a church. Although the Court's surroundings were not elaborate, Parliament did provide an annual grant towards the establishment of a Supreme Court Library from 1861 to 1879. [2]

By 1870, despite minor building modifications to the convict barracks, it had become clear that a new building was required to house the Brisbane Supreme Court. A site on George Street was selected and the prominent colonial architect, Francis Drummond Greville Stanley, submitted plans for an elaborate neoclassical building which was two storeys tall. These original plans featured stone floors and other sophisticated detail. They were later modified for financial reasons and in 1875 John Petrie successfully tendered to construct the building. [2]

On 6 March 1879, the new Supreme Court opened. The entrance on the North Quay frontage had been designed as the main entrance but this was soon superseded by the George Street entrance. In 1880, iron gates were also added to the building. In 1931, the Queensland Public Works Department provided funds for the renovation of the interior of the Brisbane Supreme Court. [2]

On the night of 2 September 1968, the building that housed the Brisbane Supreme Court was damaged by arson. [3] It was subsequently demolished, and in 1976, it was replaced with a building designed by Bligh Jessup Bretnall and was opened by Queensland Governor Sir James Ramsay on 3 September 1981. [2]

In 1989, Justice Angelo Vasta was removed from the court by Queensland Governor on the request of the Parliament. This was the first time since federation that any state had used that method to remove a sitting judge from a Supreme Court. [4] Vasta was found to be not "a fit and proper person to continue in office" after giving false evidence to an investigation related to the Fitzgerald Inquiry.

In 2008, a A$600 million building program began to create a new Brisbane Supreme Court and District Court building, designed by Architectus Brisbane, led by Prof John Hockings. The building is known as the Queen Elizabeth II Courts of Law and was officially opened on Friday 3 August 2012 by Queensland Governor Penelope Wensley. It incorporates a public plaza and links to the existing Brisbane Magistrates Court building. [5] The precinct occupies an entire city block between George, Roma and Turbot streets. [2]

The Court of Appeal also hears appeals from the District Court of Queensland.

Judges of the Court as of September 2018 [update] are:

The Supreme Court sits mainly in the Queen Elizabeth II Courts of Law in Brisbane, which also houses the District Court. [5] The court began operating out of this facility on 27 August 2012, prior to which it was located in the Law Courts Complex. [5]

The court also has judges permanently appointed to sit in Rockhampton, Townsville and Cairns, and regularly sits in other regional districts. [6]

The High Court of Australia is the highest court in the Australian court hierarchy and the final court of appeal. It has both original and appellate jurisdiction, the power of judicial review over laws passed by the Parliament of Australia and the parliaments of the states and territories, and the ability to interpret the Constitution of Australia and thereby shape the development of federalism in Australia.

Sir Walter Benjamin Campbell, was an Australian judge, administrator and governor. He was the Chief Justice of the Supreme Court of Queensland, Chancellor of the University of Queensland, and the 21st Governor of Queensland from 1985 to 1992.

Gerald Edward "Tony" Fitzgerald is a former Australian judge, who presided over the Fitzgerald Inquiry. The report from the inquiry led to the resignation of the Premier of Queensland Joh Bjelke-Petersen, and the jailing of several ministers and a police commissioner. He was the youngest person to be appointed as a judge of the Federal Court of Australia.

Paul de Jersey, is an Australian jurist and the 26th and current Governor of Queensland, in office since 29 July 2014. He was Chief Justice of Queensland from 1998 to 2014.

The District Court of Queensland is the second tier in the court hierarchy of Queensland, Australia. The Court deals with serious criminal offences such as rape, armed robbery and fraud. Juries are used to decide if defendants are guilty or not guilty.

Sir Pope Alexander Cooper was an attorney-general and a chief judge of the Supreme Court of Queensland, Australia.

Thomas William McCawley was a chief justice of Queensland.

Sir James William Blair was an Australian politician, lawyer and judge. He was a successful politician, being elected to the Queensland Parliament on several occasions. He held the office of Attorney-General of Queensland and was also the Minister for Mines and introduced many successful law reforms measures in Queensland. In latter life, he took up an appointment as a judge of the Supreme Court of Queensland and went on to become the Chief Justice of that court. Blair took on many civic roles including that of Chancellor of the University of Queensland.

Sir (John) Mostyn Hanger was a judge in the Australian state of Queensland, rising to become Chief Justice and Administrator of the state. 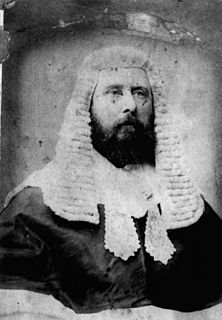 Charles Edward Chubb was a judge in the Supreme Court of Queensland, Australia. He was also a Member of the Queensland Legislative Assembly and an Attorney-General of Queensland.

Justice Henry George Fryberg was a Justice of the Supreme Court of Queensland, Australia.

The Queen Elizabeth II Courts of Law, also referred to as the Brisbane Supreme and District Court, is a court building located at 415 George Street in Brisbane, Queensland, Australia.

Timothy Francis Carmody QC is an Australian judge who was the Chief Justice of Queensland between 8 July 2014 and 1 July 2015. His previous roles include work as a police officer, barrister, Queensland Crime Commissioner, Family Court of Australia judge, and Chief Magistrate of the Magistrates Court of Queensland. He also presided over the 2013 Child Protection Commission of Inquiry.

Sir Joseph Aloysius Sheehy KBE was an Australian jurist and Senior Puisne Judge of the Queensland Supreme Court. He also served as Administrator of the Government of Queensland in 1965 and 1969, and as Queensland's Lieutenant-Governor, Deputy Governor, Acting Governor and Acting Chief Justice on several occasions.