Finsbury Square is a 0.7-hectare (1.7-acre) square in Finsbury in central London which includes a six-rink grass bowling green. [1] It was developed in 1777 on the site of a previous area of green space to the north of the City of London known as Finsbury Fields, in the parish of St Luke's and near Moorfields. It is sited on the east side of City Road, opposite the east side of Bunhill Fields. It is approximately 200m north of Moorgate station, 300m north-west of Liverpool Street station and 400m south of Old Street station. Nearby locations are Finsbury Circus and Finsbury Pavement. Named after it, but several miles away, are Finsbury Park and its eponymous neighbourhood.

In 1777 Finsbury Square was laid out as a planned quadrangle of terraced town houses surrounding a central garden. [2] Beginning in the late 19th century, the houses began to be demolished to make way for large-scale commercial properties.

Past residents of the square include Pascoe Grenfell Hill, Thomas Southwood Smith and Philip Henry Pye-Smith. It has also been the site of the bookshop of James Lackington and the first home of the rabbinical seminary that became the London School of Jewish Studies (1855–81), of the Greek Orthodox Church of Saint Sophia and of the Roman Catholic Church of St Mary Moorfields (1820–1900). [3]

The south side of the square was known as Sodomites Walk in the 18th century and was notorious as a gay cruising area. [8]

On 22 October 2011, Occupy London protesters began to camp on the Square. [9] They were subsequently removed in an eviction described by the council as 'peaceful and low key'. [10]

In January 2013, the University of Liverpool announced that its London Campus would be at 33 Finsbury Square. [11]

Also in 2013 a memorial was installed at the SW of the square commemorating those who died in the 1975 Moorgate tube crash. [12]

The north side of the square is largely occupied by Triton Court at 14–18 Finsbury Square, a steel-frame constructed office building originally built during the first three decades of the twentieth century, along with Royal London House (22–25 Finsbury Square) which dates from the 1950s.

The south of the square is City Gate House, 39–45 Finsbury Square.

Finsbury Square is also the venue for an occasional farmers' market. [16]

The buildings on the north side of the square were built over the first half of the twentieth century to serve as headquarters for what is now the Royal London Group; collectively they were known as Royal London House. The oldest (westernmost) section (with its cupola and clock on the corner with City Road) dates from 1904 to 1905 and was built by John Belcher as headquarters for the Royal London Friendly Society; over the next ten years this building was extended eastwards by four bays. The adjacent, taller section, with its prominent tower-cum-spire, dates from 1929 to 1930; it was built by Belcher's former partner, J. J. Joass, to form an expanded headquarters for the Royal London Mutual Assurance Society. (A contemporary extension to the north of the Edwardian block was also built by Joass.) Finally, the whole complex was extended eastwards again in the 1950s with the addition of a block by the architect H. Bramhill. [2]

In the 1980s, the older (pre-1940s) buildings were all comprehensively redeveloped, by Sheppard Robson & Partners, to form a new office complex: Triton Court. The interiors were gutted and rebuilt, but the façades were retained, albeit with the addition of a double-height mansard roof and the insertion of a new entrance arch through the four-bay extension to the original Edwardian block. These are now the only remaining pre-World War II buildings in the Square. After the completion of Triton Court, the 1950s block alone was left with the designation Royal London House. [2]

At around the same time the 1950s block, Royal London House, was converted into The Montcalm Hotel (completed in 2016). [19] 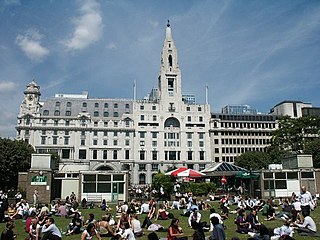 City Road or The City Road is a road that runs through central London. The northwestern extremity of the road is at Angel where it forms a continuation of Pentonville Road. Pentonville Road itself is the modern name for London's first bypass, the New Road from Paddington to Islington, which was constructed in 1756. The City Road was built in 1761 as a continuation of that route to the City of London. 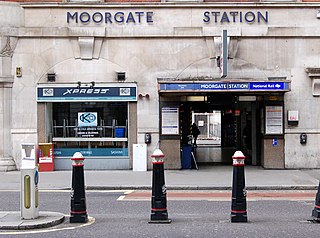 Moorgate is a central London railway terminus and connected London Underground station on Moorgate in the City of London. Main line railway services for Hertford, Welwyn Garden City, Stevenage and Letchworth are operated by Great Northern, while the Underground station is served by the Circle, Hammersmith & City, Metropolitan and Northern lines. 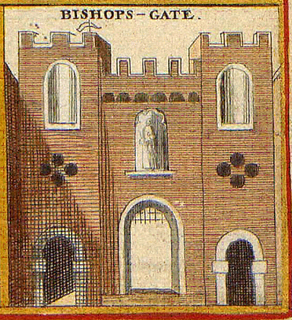 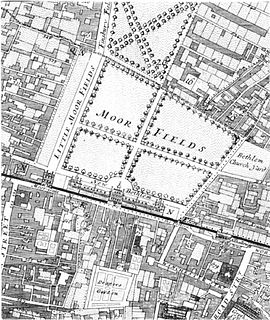 Citypoint is a building located on Ropemaker Street on the northern fringe of the City of London, the main financial district and historic nucleus of London.

Harringay railway station is in Harringay in the London Borough of Haringey, north London. It is on the Great Northern Route that forms part of the East Coast Main Line, 3 miles 32 chains (5.5 km) down the line from London King's Cross, and is situated between Finsbury Park to the south and Hornsey to the north. It opened on 1 May 1885. 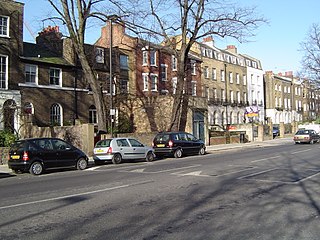 St Luke's is a district in central London in the Borough of Islington. It lies just north of the border with the City of London near the Barbican Estate, and the Clerkenwell and Shoreditch areas. The area takes its name from the now redundant parish church of St Luke's, on Old Street west of Old Street station. Following the closure of the church, the parish was reabsorbed into that of St Giles-without-Cripplegate, from which it had separated in 1733.

Finsbury Circus is a park in the Coleman Street Ward of the City of London, England. The 2.2 hectares park is the largest public open space within the City's boundaries. 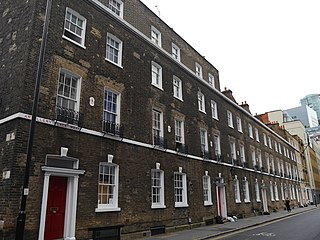 Bunhill Row is a street located in St Luke's, London Borough of Islington, London. The street runs north–south from Old Street to Chiswell Street. On the east side are the cemetery of Bunhill Fields and the open space of the Honourable Artillery Company's Artillery Ground.

Charterhouse Square is a garden square, a pentagonal space, in Smithfield, central London and is the largest courtyard or yard associated with the London Charterhouse, mostly formed of Tudor and Stuart architecture restored after the London Blitz. The square adjoins other buildings including a small school. It lies between Charterhouse Street, Carthusian Street and the main Charterhouse complex of buildings south of Clerkenwell Road. The complex includes a Chapel, Tudor Great Hall, Great Chamber, the Barts and The London School of Medicine and Dentistry and a 40-resident almshouse.

John Belcher was an English architect, and president of the Royal Institute of British Architects. 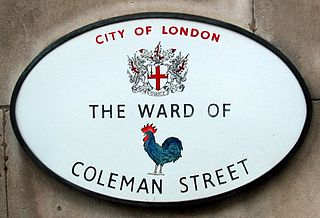 The former offices of Ordnance Survey are situated in London Road, Southampton, close to the junction with The Avenue, and are now part of the city's court complex and are occupied by Government agencies. The buildings are Grade II listed.