A flame ionization detector (FID) is a scientific instrument that measures analytes in a gas stream. It is frequently used as a detector in gas chromatography. The measurement of ion per unit time make this a mass sensitive instrument. [1] Standalone FIDs can also be used in applications such as landfill gas monitoring, fugitive emissions monitoring and internal combustion engine emissions measurement [2] in stationary or portable instruments.

The first flame ionization detectors were developed simultaneously and independently in 1957 by McWilliam and Dewar at Imperial Chemical Industries of Australia and New Zealand (ICIANZ, see Orica history) Central Research Laboratory, Ascot Vale, Melbourne, Australia. [3] [4] [5] and by Harley and Pretorius at the University of Pretoria in Pretoria, South Africa. [6]

In 1959, Perkin Elmer Corp. included a flame ionization detector in its Vapor Fractometer. [7]

To detect these ions, two electrodes are used to provide a potential difference. The positive electrode acts as the nozzle head where the flame is produced. The other, negative electrode is positioned above the flame. When first designed, the negative electrode was either tear-drop shaped or angular piece of platinum. Today, the design has been modified into a tubular electrode, commonly referred to as a collector plate. The ions thus are attracted to the collector plate and upon hitting the plate, induce a current. This current is measured with a high-impedance picoammeter and fed into an integrator. The manner in which the final data is displayed is based on the computer and software. In general, a graph is displayed that has time on the x-axis and total ion on the y-axis.

Hydrocarbons generally have response factors that are equal to the number of carbon atoms in their molecule (more carbon atoms produce greater current), while oxygenates and other species that contain heteroatoms tend to have a lower response factor. Carbon monoxide and carbon dioxide are not detectable by FID.

The design of the flame ionization detector varies from manufacturer to manufacturer, but the principles are the same. Most commonly, the FID is attached to a gas chromatography system.

The eluent exits the gas chromatography column (A) and enters the FID detector’s oven (B). The oven is needed to make sure that as soon as the eluent exits the column, it does not come out of the gaseous phase and deposit on the interface between the column and FID. This deposition would result in loss of eluent and errors in detection. As the eluent travels up the FID, it is first mixed with the hydrogen fuel (C) and then with the oxidant (D). The eluent/fuel/oxidant mixture continues to travel up to the nozzle head where a positive bias voltage exists. This positive bias helps to repel the oxidized carbon ions created by the flame (E) pyrolyzing the eluent. The ions (F) are repelled up toward the collector plates (G) which are connected to a very sensitive ammeter, which detects the ions hitting the plates, then feeds that signal to an amplifier, integrator, and display system(H). The products of the flame are finally vented out of the detector through the exhaust port (J).

Flame ionization detectors are used very widely in gas chromatography because of a number of advantages.

Flame ionization detectors cannot detect inorganic substances and some highly oxygenated or functionalized species like infrared and laser technology can. In some systems, CO and CO2 can be detected in the FID using a methanizer, which is a bed of Ni catalyst that reduces CO and CO2 to methane, which can be in turn detected by the FID. The methanizer is limited by its inability to reduce compounds other than CO and CO2 and its tendency to be poisoned by a number of chemicals commonly found in gas chromatography effluents.

Another important disadvantage is that the FID flame oxidizes all oxidizable compounds that pass through it; all hydrocarbons and oxygenates are oxidized to carbon dioxide and water and other heteroatoms are oxidized according to thermodynamics. For this reason, FIDs tend to be the last in a detector train and also cannot be used for preparatory work.

An improvement to the methanizer is the Polyarc reactor, which is a sequential reactor that oxidizes compounds before reducing them to methane. This method can be used to improve the response of the FID and allow for the detection of many more carbon-containing compounds. [11] The complete conversion of compounds to methane and the now equivalent response in the detector also eliminates the need for calibrations and standards because response factors are all equivalent to those of methane. This allows for the rapid analysis of complex mixtures that contain molecules where standards are not available. 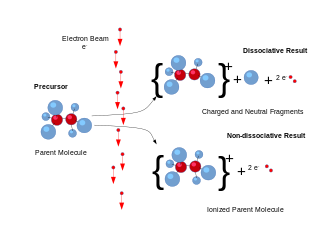 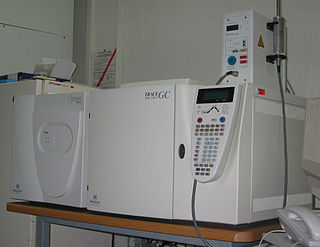 Gas chromatography–mass spectrometry (GC-MS) is an analytical method that combines the features of gas-chromatography and mass spectrometry to identify different substances within a test sample. Applications of GC-MS include drug detection, fire investigation, environmental analysis, explosives investigation, and identification of unknown samples, including that of material samples obtained from planet Mars during probe missions as early as the 1970s. GC-MS can also be used in airport security to detect substances in luggage or on human beings. Additionally, it can identify trace elements in materials that were previously thought to have disintegrated beyond identification. Like liquid chromatography–mass spectrometry, it allows analysis and detection even of tiny amounts of a substance.

The proportional counter is a type of gaseous ionization detector device used to measure particles of ionizing radiation. The key feature is its ability to measure the energy of incident radiation, by producing a detector output pulse that is proportional to the radiation energy absorbed by the detector due to an ionizing event; hence the detector's name. It is widely used where energy levels of incident radiation must be known, such as in the discrimination between alpha and beta particles, or accurate measurement of X-ray radiation dose. 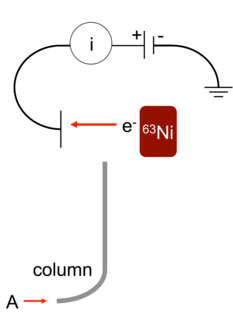 An electron capture detector (ECD) is a device for detecting atoms and molecules in a gas through the attachment of electrons via electron capture ionization. The device was invented in 1957 by James Lovelock and is used in gas chromatography to detect trace amounts of chemical compounds in a sample.

A photoionization detector or PID is a type of gas detector.

A gas detector is a device that detects the presence of gases in an area, often as part of a safety system. A gas detector can sound an alarm to operators in the area where the leak is occurring, giving them the opportunity to leave. This type of device is important because there are many gases that can be harmful to organic life, such as humans or animals.

Methanizer is an appliance used in gas chromatography (GC), which allows the user to detect very low concentrations of carbon monoxide and carbon dioxide. It consists of a flame ionization detector, preceded by a hydrogenating reactor, which converts CO2 and CO into methane CH4. Methanizers contain a hydrogenation catalyst to achieve this conversion. Nickel is commonly used as the catalyst and there are alternatives available.

Headspace gas chromatography uses headspace gas—from the top or "head" of a sealed container containing a liquid or solid brought to equilibrium—injected directly onto a gas chromatographic column for separation and analysis. In this process, only the most volatile substances make it to the column. The technique is commonly applied to the analysis of polymers, food and beverages, blood alcohol levels, environmental variables, cosmetics, and pharmaceutical ingredients.

The Charged Aerosol Detector (CAD) is a detector used in conjunction with high-performance liquid chromatography (HPLC) and ultra high-performance liquid chromatography (UHPLC) to measure the amount of chemicals in a sample by creating charged aerosol particles which are detected using an electrometer. It is commonly used for the analysis of compounds that cannot be detected using traditional UV/Vis approaches due to their lack of a chromophore. The CAD can measure all non-volatile and many semi-volatile analytes including, but not limited to, antibiotics, excipients, ions, lipids, natural products, biofuels, sugars and surfactants. The CAD, like other aerosol detectors, falls under the category of destructive general-purpose detectors.

The Polyarc reactor is a scientific instrument for the measurement of organic molecules. The reactor is paired with a flame ionization detector (FID) in a gas chromatograph (GC) to improve the sensitivity of the FID and give a uniform detector response for all organic molecules (GC-Polyarc/FID).