Habartov (German : Habersbirk) is a town in the Karlovy Vary Region of the Czech Republic. It has about 4,900 inhabitants.

Upper Franconia is a Regierungsbezirk of the state of Bavaria, southern Germany. It forms part of the historically significant region of Franconia, all now part of the German Federal State of Bayern (Bavaria). 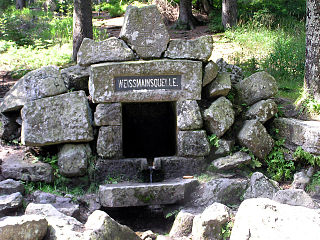 The White Main, is the larger and shorter of the two headstreams of the River Main. It rises in the Fichtelgebirge and merges near Steinenhausen, southwest of Kulmbach, with the left-hand, southern headstream, the Red Main, to form the Main. The length of the White Main is 51.7 km. The source of the White Main lies on light granite rock, which lends it its white colouration.

Langenfeld may refer to the following places in Germany:

Sokolov District is a district (okres) within the Karlovy Vary Region of the Czech Republic. Its capital is the town of Sokolov.

Tirschenreuth is the capital city of the district of Tirschenreuth. It is located in the northeast of Bavaria, very close to the Czech-Bavarian border.

This is a list of German language place names in Bohemia, now exonyms for towns and villages in the Karlovy Vary Region of the Czech Republic.

Kümmersbruck is a municipality in the Amberg-Sulzbach district, in the state of Bavaria, Germany. It is situated 3 km southeast of Amberg. A division of the German Military is stationed here. Kümmersbruck is split up in 7 districts: Kümmersbruck, Haselmühl, Gärmersdorf, Moos, Haidweiher, Penkhof, Lengenfeld and Engelsdorf. The river Vils crosses the municipality.

Bad Berneck is a spa town in the district of Bayreuth, in Bavaria, Germany. It is situated on the White Main river, in the Fichtelgebirge mountains, 13 km northeast of Bayreuth. Its official title is Bad Berneck im Fichtelgebirge. It lies in the northern part of the Bavarian province of Upper Franconia. Since 1857 it has been a spa, initially based on its climate and whey products. In 1930 it became a Kneipp spa and, in 1950, a Kneipp health spa.

The Neuenmarkt-Wirsberg–Bischofsgrün railway was one of the seven railways that used to serve the Fichtelgebirge area. 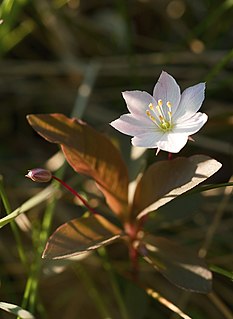 The Fichtelgebirge Club is a large walking club and local heritage society in Bavaria and recognised conservation group with 20,000 members in 55 local groups. As the name says, its main sphere of activity is in the Fichtelgebirge mountains in north Bavaria. Its emblem is the Arctic starflower. 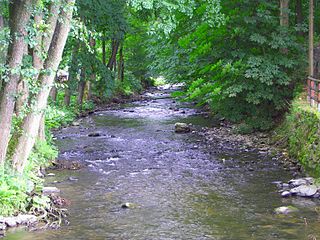 The Ölschnitz is a right-bank, northern headstream of the White Main in the German province of Upper Franconia in Bavaria. It is 22.1 kilometres (13.7 mi) long.

The Bundesstraße 303 is a German federal highway that runs from west to east, beginning at the A 7 autobahn west of Schweinfurt and ending at the border with the Czech Republic east of Schirnding. It runs through the eastern part of Lower Franconia and the whole of Upper Franconia.

The Altes Schloss near Bad Berneck in south Germany is a ruined castle built in the Gothic style as an Amtsburg towards the end of the High Middle Ages. The castle lies on the Schlossberg of Bad Berneck in the Upper Franconian district of Bayreuth in Bavaria. Today the lofty keep is the emblem of this small spa town. 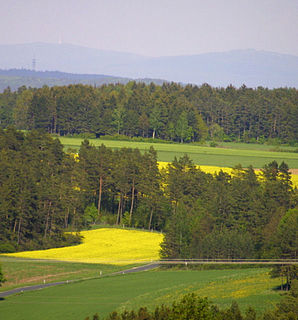 The Jean-Paul-Weg is a 150km hiking trail in Germany in honour of the writer Jean Paul Friedrich Richter (1763–1825), leading through the Frankenwald, Fichtelgebirge, and Little Switzerland.

The Voigtland State Railway was originally one of the lines of the Royal Saxon State Railways that was built in Vogtland, now in the German state of Saxony and the Czech Republic. The line began from the junction station of Herlasgrün on the Saxon-Bavarian Railway and ran via Falkenstein, Oelsnitz and Bad Elster to Cheb. Only the Herlasgrün–Falkenstein and Oelsnitz–Cheb sections are still operating.

Altes Schloss or Altes Schloß, which is German for "Old Palace" or "Old Castle", may refer to the following structures: 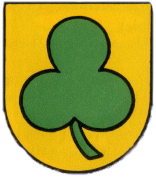 In der Maur is an ancient armigerous family of Swiss origin. Throughout the Middle Ages and Renaissance, the In der Maur family held positions of regional administrative authority in the government of Farniwang, later known as Berneck, St. Gallen. A branch of the family living in South Tyrol, von In der Maur auf Strelburg und zu Freifeld, was elevated into the ranks of the lower nobility within the Holy Roman Empire and the Kingdom of Bavaria. Prominent members of the family include the Swiss artist Robert Indermaur and the Austrian statesman Carl von In der Maur, who served as Governor of Liechtenstein.