Last updated April 24, 2020
"Sister cities" and "Twin town" redirect here. For the film, see Sister Cities (film). For the phenomenon of cities located close to each other, see Twin cities. For other uses, see Twin city.
Agreement between geographical entities

Sister cities or twin towns are a form of legal or social agreement between towns, cities, counties, oblasts, prefectures, provinces, regions, states, and even countries in geographically and politically distinct areas to promote cultural and commercial ties. [1] The modern concept of town twinning, conceived after the Second World War in 1947, was intended to foster friendship and understanding among different cultures and between former foes as an act of peace and reconciliation, [2] [3] and to encourage trade and tourism. [1] By the 2000s, town twinning became increasingly used to form strategic international business links among member cities. [4] [5]

In the United Kingdom, the term "twin towns" is most commonly used; the term "sister cities" is generally used for agreements with towns and cities in the Americas. [1] [6] In mainland Europe, the most commonly used terms are "twin towns," "partnership towns," "partner towns," and "friendship towns." The European Commission uses the term "twinned towns" and refers to the process as "town twinning." [1] [6] Spain uses the term "ciudades hermanadas," which means "sister cities." Germany, Poland, and the Czech Republic use Partnerstadt (De) / miasto partnerskie (Pl) / partnerské město (Cz), which translate as "partner town" or "partner city." France uses ville jumelée (jumelage, twinned town or city), and Italy has gemellaggio (twinning) and comune gemellato (twinned municipality). [7] In the Netherlands, the term is partnerstad or stedenband ("city bond," when providing mutual support). In Greece, the word αδελφοποίηση (adelfopiisi –fraternisation) has been adopted. In Iceland, the terms vinabæir (friend towns) and vinaborgir (friend cities) are used. In the former Soviet Bloc, "twin towns" and "twin cities" were used, [8] along with города-побратимы (Ru) (sworn brother cities). [9] [10]

The Americas, South Asia, and Australasia use the term "sister cities" or "twin cities." In China, the term is 友好城市 (yǒuhǎo chéngshì –friendship city). [11] Sometimes, other government bodies enter into a twinning relationship, such as the agreement between the provinces of Hainan in China and Jeju-do in South Korea. The douzelage is a town twinning association with one town from each of the member states of the European Union. [1] [12]

City diplomacy is a form of paradiplomacy that involves discussions between officials and residents of different cities. Often these cities will be located in different countries. As such city diplomacy involves a sort of international relations that works in parallel to the conventional system involving embassies, ambassadors and treaties negotiated at the level of nation states. According to Rodrigo Tavares, the earliest formal attempts to establish city diplomacy across national boundaries took place in the 19th century. Only a handful of cities were involved in the 19th century efforts; it wasn't until the turn of the millennium that it became much more common. [14] The first priority of those carrying out city diplomacy typically overlaps with the core aims of municipal government - improving the lives of local residents. Yet they will often collaborate with peers in other cities to work on issues of planet wide concern, such as efforts to address climate change. [15] [14]

The phrase "city diplomacy" is formally used in the workings of the United Cities and Local Governments and the C40 Cities Climate Leadership Group , and is recognised by the USC Center on Public Diplomacy. A March 2014 debate in the British House of Lords acknowledged the evolution of town twinning into city diplomacy, particularly in matters off trade and tourism, but also in culture and post-conflict reconciliation. [16] The importance of cities developing "their own foreign economic policies on trade, foreign investment, tourism and attracting foreign talent" has also been highlighted by the World Economic Forum. [17] In addition to C40, other organisations facilitating city diplomacy include the World Cities Summit , the Smart City Expo World Congress, [18] the Strong City Network [19] and 100 Resilient Cities. [20] [15] As of 2016, there were over 125 such multilateral networks and forums to facilitate international collaboration between different municipal authorities. [14]

The earliest known town twinning in Europe was between Paderborn, Germany, and Le Mans, France, in 836. [2] [21] Starting in 1905, Keighley in West Yorkshire, England, had a twinning arrangement with French communities Suresnes and Puteaux. [22] [23] The first recorded modern twinning agreement was between Keighley and Poix-du-Nord in Nord, France, in 1920 following the end of the First World War. [5] [23] [24] [25] This was initially referred to as an adoption of the French town; formal twinning charters were not exchanged until 1986. [26]

The practice was continued after the Second World War as a way to promote mutual understanding and cross-border projects of mutual benefit. [1] [2] [27] [28] [29] For example, Coventry twinned with Stalingrad and later with Dresden as an act of peace and reconciliation, all three cities having been heavily bombed during the war. [1] [25] [30] [31] [32] The City of Bath formed an "Alkmaar Adoption committee" in March 1945, when the Dutch city was still occupied by the German Army in the final months of the war, and children from each city took part in exchanges in 1945 and 1946. [33] Similarly, in 1947, Bristol Corporation (later Bristol City Council) sent five 'leading citizens' on a goodwill mission to Hanover. [5] [25] Reading in 1947 was the first British town to form links with a former "enemy" city – Düsseldorf. The link [34] still exists. Since 9 April 1956 Rome and Paris have been exclusively and reciprocally twinned with each other, following the motto: "Only Paris is worthy of Rome; only Rome is worthy of Paris." [35] [36]

Within Europe, town twinning is supported by the European Union. [1] [2] [5] The support scheme was established in 1989. In 2003 an annual budget of about € 12 million was allocated to about 1,300 projects. The Council of European Municipalities and Regions also works closely with the Commission (DG Education and Culture) to promote modern, high quality twinning initiatives and exchanges that involve all sections of the community. It has launched a website dedicated to town twinning. [37] As of 1995, the European Union had more than 7,000 bilateral relationships involving almost 10,000 European municipalities, primarily French (2837 twinnings) and German (2485 twinnings). [29]

Public art has been used to celebrate twin town links, for instance in the form of seven mural paintings in the centre of the town of Sutton, Greater London. The five main paintings show a number of the main features of the London Borough of Sutton and its four twin towns, along with the heraldic shield of each above the other images. Each painting also features a plant as a visual representation of its town's environmental awareness. [38] In the case of Sutton this is in a separate smaller painting (above its main one) showing a beech tree, intended as a symbol of prosperity and from which Carshalton Beeches in the borough derives its name. [39]

Another example of the use of public art is the wall sculpture of the partner cities of Munich, Germany.

A recent study has concluded that geographical distance has very little, if any, influence upon communities' selections of a twin town. [40] Twinned towns are often chosen because of similarities between them; thus about 15 towns in Wales are twinned with towns in Brittany, and Oxford is with Bonn, Leiden, Grenoble and other university cities. [1] In Italy a good example of Twinnings is Rovigo with Viernheim, Bedford and Tulcea. Many former West German cities are twinned with former East German cities; these twinning links were established before the fall of the Iron Curtain. Famous examples are the partnerships of Hanover and Leipzig, both of which have important trade fair grounds, or between Hamburg and Dresden. The first US-German town twinning was in 1947 between Worthington, Minnesota and Crailsheim. [1] St Petersburg in Russia holds the record for the largest number of partnership arrangements with other communities. [40] In June 2012, the Scottish village of Dull and the US town of Boring, Oregon, agreed to twin their municipalities to promote tourism in both places, playing on their names. [41] [42] [43]

Recently some towns have made novelty twinning arrangements with fictional or virtual locations. Wincanton, England is partnered with Ankh-Morpork from Terry Pratchett's Discworld books. [44]

Town twinning has increasingly been used to form strategic international business links. For example, in the 1990s, when the Nottingham City Council in the UK considered installing a tram network, it consulted experts from its twin city of Karlsruhe, which has one of the most extensive and efficient tram networks in Germany. With assistance from Karlsruhe's specialist engineers, Nottingham completed its second tram line in 2013. [4] In 2014, Bristol and New Orleans announced their intention to form a 'tuning' partnership based on a shared musical heritage and culture offer, at the initiative of Bristol Mayor George Ferguson. [45] Annecy, France and Nerima, Tokyo have for several years shared a partnership based on their "co-existent animation industry." [46] [47]

Town twinning begins for a variety of reasons. Generally, partner towns have similar demographics and size. They may arise from business connections, travel, similar industries, diaspora communities, or shared history. For example, the partnership between Portland, Oregon and Bologna, Italy arose from shared industries in biotechnology and education, and a "similar attitude towards food," [51] whereas Chicago's link with Warsaw, Poland began with Chicago's historic Polish community. [52] The twinning of Indianapolis with Monza, Italy is due to both cities' long association with auto racing.

A twin towns program was instituted in the United States in 1956 when President Dwight D. Eisenhower proposed a citizen diplomacy initiative. Sister Cities International (SCI) was originally a program of the National League of Cities, but it became a separate corporation in 1967 due to the growth and popularity of the program. [53]

China's sister city relationships are managed by the Chinese People's Association for Friendship with Foreign Countries. [55] Town twinning is supported in Japan by the Council of Local Authorities for International Relations, a joint agency of local governments established by the Japanese government in 1988 (similar to Sister Cities International, its counterpart in the US). More recently, Tokyo has begun to actively promote 'city diplomacy' with other global cities at the initiative of its governor Yoichi Masuzoe. [56]

Relationships between communities can also arise because of shared names; they may be named after one community (as in the case of Córdoba), they may share names (as in the case of Santiago de Compostela), or their names may have a common etymology.

These similarities usually arise from sharing the same or related language, or from having been a colony or previously conquered.

Twinning towns and cities is sometimes done for political purposes. The Hungarian city Gyöngyös was twinned with the Azerbaijani city of Shusha in 2013, signing the twinning agreement with representatives from the Azerbaijani government; Hungary recognises Shusha as part of Azerbaijan, even though since the end of the Karabakh War it has been controlled by the military forces of Armenia and the unrecognised Artsakh ( de jure part of Azerbaijan). [57] An attempt was made in 2003 by Preston city councillors in England to twin with the Palestinian town of Nablus in the name of solidarity. [58]

Termination of sister city relationships as the result of a dispute 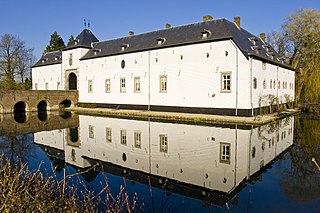 Meerssen is a place and a municipality in southeastern Netherlands.

Sister Cities International (SCI) is a nonprofit citizen diplomacy network that creates and strengthens partnerships between communities in the United States and those in other countries, particularly through the establishment of "sister cities". More than 2,000 cities, states and counties are partnered in over 140 countries around the world. The organization "strives to build global cooperation at the municipal level, promote cultural understanding and stimulate economic development".