Characteristics of handwriting include:

Children with ADHD have been found to be more likely to have less legible handwriting, make more spelling errors, more insertions and/or deletions of letters and more corrections. In children with these difficulties, the letters tend to be larger with wide variability of letters, letter spacing, word spacing, and the alignment of letters on the baseline. Variability of handwriting increases with longer texts. Fluency of the movement is normal but children with ADHD were more likely to make slower movements during the handwriting task and hold the pen longer in the air between movements, especially when they had to write complex letters, implying that planning the movement may take longer. Children who have ADHD were more likely to have difficulty parameterising movements in a consistent way. This has been explained with motor skill impairment either due to lack of attention or lack of inhibition. To anticipate a change of direction between strokes constant visual attention is essential. With inattention, changes will occur too late, resulting in higher letters and poor alignment of letters on the baseline. The influence of medication on the quality of handwriting is not clear. [3]

Because handwriting is relatively stable, a change in the handwriting can be indicative of the nervousness or intoxication of the writer.[ citation needed ]

A sample of a person's writing can be compared to that of a written document to determine and authenticate the written document's writer; if the writing styles match, it is likely that one person wrote both documents.[ citation needed ]

Graphology is the pseudoscientific [4] [5] [6] study and analysis of handwriting in relation to human psychology. Graphology is primarily used as a recruiting tool in the applicant screening process for predicting personality traits and job performance, despite research showing consistently negative results for these uses. [7] [8] [9] 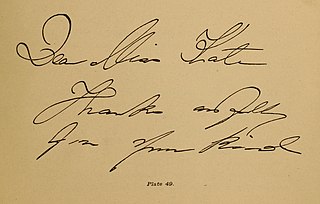 Graphology is the analysis of the physical characteristics and patterns of handwriting with attempt to identify the writer, indicate the psychological state at the time of writing, or evaluate personality characteristics. No scientific evidence exists to support graphology, and it is generally considered a pseudoscience or scientifically questionably practice. However, it remains in widespread use in France and has historically been considered legitimate for use in some court cases. The term is sometimes incorrectly used to refer to forensic document examination, due to the fact that aspects of the latter dealing with the examination of handwritten documents are occasionally referred to as graphanalysis. 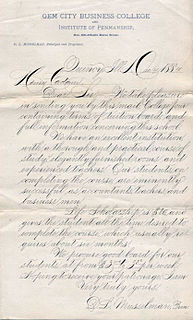 Cursive is any style of penmanship in which some characters are written joined together in a flowing manner, generally for the purpose of making writing faster, in contrast to block letters. Cursive handwriting is very functional, and is intended to be used in everyday writing. In addition, it is also used in art and calligraphy hand-lettering. Formal cursive is generally joined, but casual cursive is a combination of joins and pen lifts. The writing style can be further divided as "looped", "italic" or "connected". 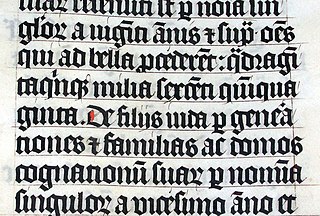 Blackletter, also known as Gothic script, Gothic minuscule, or Textura, was a script used throughout Western Europe from approximately 1150 until the 17th century. It continued to be commonly used for the Danish language until 1875, and for German, Estonian and Latvian until the 1940s. Fraktur is a notable script of this type, and sometimes the entire group of blackletter faces is incorrectly referred to as Fraktur. Blackletter is sometimes referred to as Old English, but it is not to be confused with the Old English language, which predates blackletter by many centuries and was written in the insular script or in Futhorc. Along with Italic type and Roman type, it served as one of the major typefaces in the history of Western typography.

Dysgraphia is a deficiency in the ability to write, primarily handwriting, but also coherence. Dysgraphia is a specific learning disability as well as a transcription disability, meaning that it is a writing disorder associated with impaired handwriting, orthographic coding, and finger sequencing. It often overlaps with other learning disabilities such as speech impairment, attention deficit hyperactivity disorder, or developmental coordination disorder. In the Diagnostic and Statistical Manual of Mental Disorders (DSM-IV), dysgraphia is characterized as a learning disability in the category of written expression when one's writing skills are below those expected given a person's age measured through intelligence and age-appropriate education. The DSM is not clear in whether or not writing refers only to the motor skills involved in writing, or if it also includes orthographic skills and spelling.

Italic script, also known as chancery cursive, is a semi-cursive, slightly sloped style of handwriting and calligraphy that was developed during the Renaissance in Italy. It is one of the most popular styles used in contemporary Western calligraphy, and is often one of the first scripts learned by beginning calligraphers.

The Rotunda is a specific medieval blackletter script. It originates in Carolingian minuscule. Sometimes, it is not considered a blackletter script, but a script on its own. It was used mainly in southern Europe.

Chirography is the study of penmanship and handwriting in all of its aspects.

Asemic writing is a wordless open semantic form of writing. The word asemic means "having no specific semantic content", or "without the smallest unit of meaning". With the non-specificity of asemic writing there comes a vacuum of meaning, which is left for the reader to fill in and interpret. All of this is similar to the way one would deduce meaning from an abstract work of art. Where asemic writing distinguishes itself among traditions of abstract art is in the asemic author's use of gestural constraint, and the retention of physical characteristics of writing such as lines and symbols. Asemic writing is a hybrid art form that fuses text and image into a unity, and then sets it free to arbitrary subjective interpretations. It may be compared to free writing or writing for its own sake, instead of writing to produce verbal context. The open nature of asemic works allows for meaning to occur across linguistic understanding; an asemic text may be "read" in a similar fashion regardless of the reader's natural language. Multiple meanings for the same symbolism are another possibility for an asemic work, that is, asemic writing can be polysemantic or have zero meaning, infinite meanings, or its meaning can evolve over time. Asemic works leave for the reader to decide how to translate and explore an asemic text; in this sense, the reader becomes co-creator of the asemic work.

Secretary hand is a style of European handwriting developed in the early sixteenth century that remained common in the sixteenth and seventeenth centuries for writing English, German, Welsh and Gaelic. 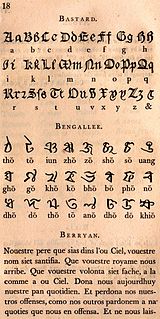 Bastarda was a blackletter script used in France, the Burgundian Netherlands and Germany during the 14th and 15th centuries. The Burgundian variant of script can be seen as the court script of the Dukes of Burgundy and was used to produce some of the most magnificent manuscripts of the 15th century.

The term "chancery hand" can refer to either of two distinct styles of historical handwriting.

Developmental coordination disorder (DCD), also known as developmental motor coordination disorder, developmental dyspraxia or simply dyspraxia, is a chronic neurological disorder beginning in childhood. It is also known to affect planning of movements and co-ordination as a result of brain messages not being accurately transmitted to the body. Impairments in skilled motor movements per a child's chronological age interfere with activities of daily living. A diagnosis of DCD is then reached only in the absence of other neurological impairments such as cerebral palsy, multiple sclerosis, or Parkinson's disease.

Round Hand is a type of handwriting and calligraphy originating in England in the 1660s primarily by the writing masters John Ayres and William Banson. Characterised by an open flowing hand (style) and subtle contrast of thick and thin strokes deriving from metal pointed nibs in which the flexibility of the metal allows the left and right halves of the point to spread apart under light pressure and then spring back together, Round Hand's popularity grew rapidly, becoming codified as a standard, through the publication of printed writing manuals.

Court hand was a style of handwriting used in medieval English law courts, and later by professionals such as lawyers and clerks. "It is noticeably upright and packed together with exaggeratedly long ascenders and descenders, the latter often and the former occasionally brought round in sweeping crescent shaped curves".

Ruqʿah, is a variety of the Arabic script, primarily used in official documents and every-day writing. Not to be confused with reqaʿ—one of the six traditional arabic scripts (al-aqlām al-sittah).

Handwriting may refer to a person's particular style of writing by hand.

A book hand was any of several stylized handwriting scripts used during ancient and medieval times. It was intended for legibility and often used in transcribing official documents. 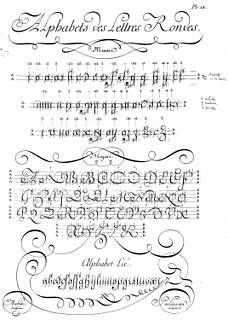 Ronde is a kind of script in which the heavy strokes are nearly upright, giving the characters when taken together a round look. It appeared in France at the end of the 16th century, growing out from a late local variant of Gothic cursive influenced by N. Italian Renaissance types in Rotunda, a bookish round Gothic style, as well as Civilité, also a late French variant of Gothic cursive. It was popularized by writing masters such as Louis Barbedor in the 17th century.