High Flight is a 1957, CinemaScope, American, cold war children’s film in Technicolor, directed by John Gilling and featuring Ray Milland, Bernard Lee and Leslie Phillips. High Flight was filmed with the co-operation of the Royal Air Force (RAF). The title of the film was derived from the poem of the same title by Pilot Officer John Gillespie Magee, Jr., an American aviator who flew for the Royal Canadian Air Force (RCAF) and lost his life in 1941 over RAF Cranwell, where much of the film was shot. [3] [N 2]

A group of flight cadets arrive at RAF Cranwell to begin a three-year training course to become RAF pilots. Amongst the group is Tony Winchester (Kenneth Haigh) who makes a memorable entrance by landing his civilian Taylorcraft Auster aircraft with his girlfriend (Anne Aubrey) aboard on the RAF runway just ahead of a de Havilland Vampire jet trainer piloted by Wing Commander Rudge (Ray Milland).

During the Second World War, Winchester's father had been Rudge's commanding officer and was killed protecting Rudge, who had disobeyed orders. Winchester is a difficult individual who harbours animosity towards Rudge over his father's death. Another of the aspiring pilots is the scientific minded Roger Endicott (Anthony Newley) who is also determined to create a working flying saucer. Endicott's flying radio-controlled model develops difficulties and crashes into the middle of a Bishop's (Ian Fleming) tea party.

Winchester doesn't learn the meaning of teamwork and is nearly killed when he disobeys orders, flying into a storm. Rudge demands his resignation but reconsiders, remembering his own rash behaviour had been the cause of the death of Winchester's father. Rudge ultimately selects Winchester to fly in a precision aerial team training for the Farnborough Airshow. When the squadron is temporarily posted to a forward base in West Germany, Winchester flies close to hostile territory near the inner-German border and is nearly shot down by East German anti-aircraft guns firing across the border. The wounded airman and his stricken aircraft are rescued by Rudge, who brings him back safely to a crash landing at his home base. Finally, Winchester comes to understand his role in the RAF and that he is part of a team effort.

Irving Allen and Albert Broccoli commissioned Jack Davies to write a screenplay about the present day Royal Air Force. Davies visited various RAF stations in Britain and Germany as well as the RAF College at Cranwell. "To say that I was impressed with what I saw and learnt was an understatement", said Davies. "These young men who fly daily at supersonic speeds are the flower of our youth. They work hard and they play hard." [6] Ken Hughes worked on the script [7]

Photography was originally scheduled around No. 111 Squadron RAF, nicknamed "Treble One" or "Tremblers", stationed at RAF Wattisham. The squadron was in the process of, or had been recently selected as the Royal Air Force Fighter Command Aerobatics Display Team, which became known as the Black Arrows. [8] Film of the team at the 1956 Farnborough Airshow was featured. [9] When inclement weather interrupted filming at their home base, the production moved to RAF Leuchars in Fife. Scotland, base of No. 43 Squadron RAF. RAF Leuchars later stood in for RAF Wunsdorf in West Germany. Principal photography which began on 10 April 1957, also took place at RAF Cranwell, Lincolnshire, using not only the facility but also film of the graduating ceremony of a training course, as well as RAF Chivenor, Devon, United Kingdom.

The use of RAF Percival Provost piston and de Havilland Vampire T.11 jet training aircraft and operational Hawker Hunter fighter aircraft heightened the authenticity of the film. [10] During the course of production at RAF Leuchars, a Hunter "wheeled up" which allowed the film crew to use the wreck to simulate a Hunter crash. When the RAF did not allow the film crew to use an operational airframe as a camera aircraft, one Hunter was converted into a "PR" version, specially modified at great cost, to carry a forward-facing Cinemascope camera. A screen was drawn on the front windscreen of the camera Hunter with a chinagraph crayon. The pilot was instructed to fill the windscreen with aircraft. Additional air-to-air shots were taken from an Avro Lincoln bomber. [11] [N 3] Other aircraft visible in the film include Handley Page Hastings transport aircraft and Bristol Sycamore helicopters.

The casting of Ray Milland was typical of the Warwick Films productions, in using the star power of an American actor but in the case of Milland, he was also well suited to the film and its subject matter. During the 1930s and into the 1940s, the Welsh-born actor had moved to Hollywood and during the Second World War, had served as a civilian instructor for the United States Army Air Forces. [3]

The film had a Gala World Premiere on 12 September 1957 at the Empire, Leicester Square. Released in England during Battle of Britain Week, High Flight did not fare well with critics. The film was a commercial success, leading to a studio re-release in 1961. [12] The authoritative Flight magazine noted that the aviation theme dominated, with 40 minutes of film time devoted to flying sequences. [11] Later reviewers commented that the film was "... well written and acted. Lots of authentic jet flying sequences". [10] Leonard Maltin indicated " (a) stale British drama of recruits in training for the RAF ... Last reel, in the air, (was the) only exciting part." [13]

Although rarely seen on television and at times the US version, only in black and white, is broadcast, a DVD in colour is now available. [14]

London Biggin Hill Airport is an operational general aviation airport at Biggin Hill in the London Borough of Bromley, located 12 NM south-southeast of Central London. The airport was formerly a Royal Air Force station RAF Biggin Hill, and a small enclave on the airport still retains that designation.

No. 4 Squadron, normally written as IV Squadron, of the Royal Air Force operates the BAE Hawk T2 in the training role from RAF Valley.

An Air Experience Flight (AEF) is a training unit of the Royal Air Force Volunteer Reserve whose main purpose is to give introductory flying experience to cadets from the Air Training Corps and the Combined Cadet Force. As of 2019, thirteen AEFs are active. 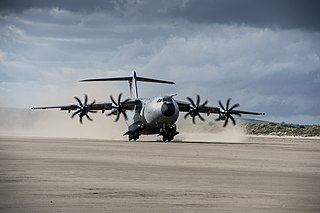 Pembrey Sands Air Weapons Range is a Ministry of Defence air weapons range located near the village of Pembrey, Carmarthenshire, 3 miles (4.8 km) northwest of Burry Port and 10.3 miles (16.6 km) south of Carmarthen, Wales. Adjacent to the weapons range site was a Royal Air Force station known as RAF Pembrey which closed is 1957 and is now a in civilian use as Pembrey Airport.

The Grob G 115 is a general aviation fixed-wing aircraft, primarily used for flight training. It is built in Germany by Grob Aircraft. The E variant with a 3-blade variable pitch propeller is in service with the Finnish Air Force, the Royal Navy and Army Air Corps for Flying Grading and in the Royal Air Force as part of No. 6 Flying Training School which provides flying to both University Air Squadrons and Air Experience Flights to Cadets of the Royal Air Force Air Cadets. As of 2020, the Tutor is still being used by the RAF for some Elementary Flying Training (3FTS) but is due to be phased out in favour of its replacement, the Prefect T1. 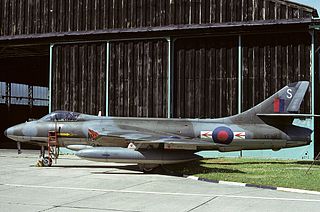 The Hawker Hunter Tower Bridge incident occurred on 5 April 1968, when Royal Air Force (RAF) Hawker Hunter pilot Alan Pollock performed unauthorised low flying over several London landmarks and then flew through the span of Tower Bridge on the River Thames. His actions were to mark the 50th anniversary of the founding of the RAF and as a demonstration against the Ministry of Defence for not recognising it. 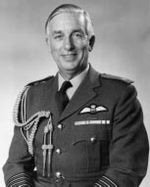 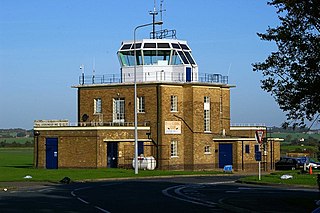 North Weald Airfield is an operational general aviation aerodrome, in the civil parish of North Weald Bassett in Epping Forest, Essex, England. It was an important fighter station during the Battle of Britain, when it was known as the RAF Station RAF North Weald. It is the home of North Weald Airfield Museum. It is home to many private aircraft and historic types, Essex & Herts Air Ambulance helicopter and is an active flight training airfield. 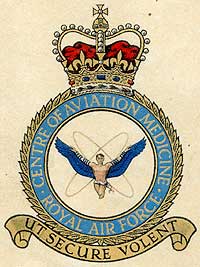 The RAF Centre of Aviation Medicine is a medical organisation run by the Royal Air Force and based at RAF Henlow in Bedfordshire. It is the main organisation conducting aviation medicine research in the UK.

Squadron Leader Hilary Richard Lionel "Robin" Hood, was a Royal Air Force fighter pilot of the Second World War, who was killed during the Battle of Britain.

No. 3 Flying Training School is a Royal Air Force military training school, which manages elementary flying training for the Royal Navy and Royal Air Force and also for the training of all non-pilot aircrew for the RAF and is home to the Central Flying School Tutor Squadron. 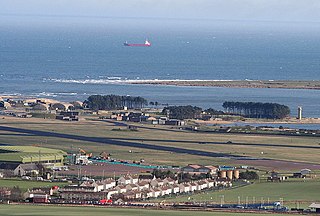 Royal Air Force Leuchars or RAF Leuchars was a Royal Air Force (RAF) station located in Leuchars, Fife, on the east coast of Scotland. Throughout the Cold War and beyond, the station was home to fighter aircraft which policed northern UK airspace. The station ceased to be an RAF station at 12:00 hrs on 31 March 2015 when it became Leuchars Station and control of the site was transferred to the British Army. The RAF temporarily returned to Leuchars between August and October 2020 to carry out QRA (I) responsibilities while runway works were being carried out at RAF Lossiemouth.

John Frederick Farley, was a British fighter pilot and test pilot for the Royal Air Force who was made an Officer of the Order of the British Empire for his work in aviation. As a test pilot, he was heavily involved in the development of the Hawker Siddeley P.1127 and latterly the BAE Harrier. During his aviation career Farley flew over 80 different types of aircraft and was the first British pilot to fly the Mikoyan MiG-29.