Hill's Pet Nutrition, Inc., marketed simply as "Hills", is an American pet food company that produces dog and cat foods. The company is a subsidiary of Colgate-Palmolive.

By the 1930s, [3] [4] [5] the name had changed to Hill Packing Company, which included a milling division, Hill Milling company. At this time the company produced farm animal feed, dog food and horse meat for human consumption, processing 500 head of horse per week. [6] The meat was shipped to markets in Norway, Sweden, Finland and the Netherlands. Much of the horse meat was sold to the east coast as a product called Chopped and Cured and shipped to Europe as barreled horse loins.[ citation needed ]

In 1948, Mark L. Morris contacted Hill Packing Company to produce Canine k/d. Hill Packing Company became the license producer of Canine k/d. [7] In 1968, the food line was made available through veterinarians and pet professionals as Hill's Science Diet. The line continued to expand and includes more than 60 Prescription Diet brand pet foods (prescription foods for cats and dogs with specific diseases, only available through a vet or pet pharmacy) and Science Diet brand pet foods (sold through veterinarians and pet specialty stores). In 1968, [8] Hill Packing Company was sold to Riviana Foods, [9] then in 1976 the Colgate-Palmolive Company merged [10] with Riviana Foods.

Science Diet was developed in the 1960s by Mark L. Morris Jr. (1934 – 2007). Morris was the son of veterinarian Dr. Mark Morris Sr., who pioneered the field of veterinary clinical nutrition when asked to create a specialized diet for the original seeing-eye dog, Buddy, a female German Shepherd with kidney disease. That success led Morris and his son to create additional condition-specific and life-stage pet food formulas under the Prescription Diet and Science Diet brand names. [11]

Between 1932 and 1942, Dr. Francis Pottenger conducted a 10-year study in nutrition on 900 cats and discovered that cats suffered from health complications on a cooked meat diet and stopped reproducing themselves. In 1948, Morris Sr. ignored Pottenger's findings and produced cooked diets.

Prescription Diet is a line of pet food formulated to help cats and dogs with health issues.

One Prescription Diet line and five products of the Science Diet line were involved in the 2007 pet food recalls for their inclusion of melamine tainted wheat gluten received from China. [12] [13] [14] [15]

On January 31, 2019, Hill's recalled 25 varieties of its canned dog food, because of elevated levels of vitamin D, due to a supplier error. Vitamin D overdose in animals can cause irreversible kidney damage and eventually death. [16] On February 12, 2019, San Francisco law firm Schubert Jonckheer & Kolbe LLP filed a class action lawsuit in the United States District Court for the Northern District of California against Hill's on behalf of affected owners for distributing dog food which contained potentially toxic levels of vitamin D. [17] [18] 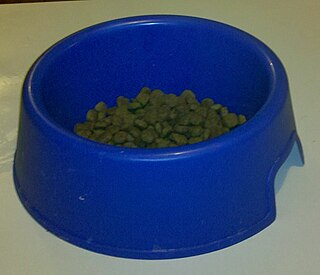 Dog food is food specifically formulated and intended for consumption by dogs and other related canines. Dogs are considered to be omnivores with a carnivorous bias. They have the sharp, pointed teeth and shorter gastrointestinal tracts of carnivores, better suited for the consumption of meat than of vegetable substances, yet also have 10 genes that are responsible for starch and glucose digestion, as well as the ability to produce amylase, an enzyme that functions to break down carbohydrates into simple sugars - something that carnivores lack. Dogs evolved the ability living alongside humans in agricultural societies, as they managed on scrap leftovers from humans.

Animal euthanasia is the act of killing an animal or allowing it to die by withholding extreme medical measures. Reasons for euthanasia include incurable conditions or diseases, lack of resources to continue supporting the animal, or laboratory test procedures. Euthanasia methods are designed to cause minimal pain and distress. Euthanasia is distinct from animal slaughter and pest control although in some cases the procedure is the same. 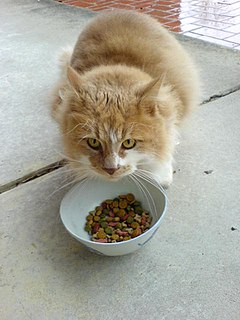 Cat food is food for consumption by cats. Cats have specific requirements for their dietary nutrients. Certain nutrients, including many vitamins and amino acids, are degraded by the temperatures, pressures and chemical treatments used during manufacture, and hence must be added after manufacture to avoid nutritional deficiency.

Raw feeding is the practice of feeding domestic dogs, cats and other animals a diet consisting primarily of uncooked meat, edible bones, and organs. The ingredients used to formulate raw diets can vary. Some pet owners choose to make home-made raw diets to feed their animals but commercial raw food diets are also available.

Francis Marion Pottenger Jr. was an American physician and raw food diet advocate. He was a disciple of Weston A. Price, best known for his cat study that sparked interest in a diet high in raw animal products including uncooked meats and unpasteurized dairy. The Price-Pottenger Nutrition Foundation is named after Price and Pottenger.

Pet food is animal feed intended for consumption by pets. Typically sold in pet stores and supermarkets, it is usually specific to the type of animal, such as dog food or cat food. Most meat used for animals is a byproduct of the human food industry, and is not regarded as "human grade".

ZuPreem is a brand of Manna Pro Products., which manufactures and sells animal feeds, particularly for zoo animals and exotic pets.

An animal product, also known as lacticinia, is any material derived from the body of an animal. Examples are fat, flesh, blood, milk, eggs, and lesser known products, such as isinglass and rennet.

The Nutro Company, Inc., a subsidiary company of Mars Incorporated, is the developer and manufacturer of the Max, Wholesome Essentials, Ultra, Wild Frontier, and Crave brands of dog and cat food, as well as Greenies dental treats. The company is headquartered in Franklin, Tennessee, USA.

In processed animal foods, a filler is an ingredient added to provide dietary fiber, bulk or some other non-nutritive purpose.

In China, the adulteration and contamination of several food and feed ingredients with inexpensive melamine and other compounds, such as cyanuric acid, ammeline and ammelide, are common practice. These adulterants can be used to inflate the apparent protein content of products, so that inexpensive ingredients can pass for more expensive, concentrated proteins. Melamine by itself has not been thought to be very toxic to animals or humans except possibly in very high concentrations, but the combination of melamine and cyanuric acid has been implicated in kidney failure. Reports that cyanuric acid may be an independently and potentially widely used adulterant in China have heightened concerns for both animal and human health.

Dick Van Patten's Natural Balance Pet Foods is an American pet food manufacturer with its headquarters located in Burbank, Los Angeles, California. Established in 1989 by actor Dick Van Patten, the company markets itself as "Food For a Lifetime" and promotes itself as having "the finest food you can buy for your pet." A subsidiary of Big Heart Pet Brands, it was previously owned by the J.M. Smucker Company until February 2021, when it was sold to Nexus Capital Management LP.

Vegepet is the brand of a line of vegan dog and cat food by Harbingers of a New Age, based in Troy, Montana, United States.

The health of domestic cats is a well studied area in veterinary medicine.

Pet Fooled is a 2016 American independent documentary film exploring the pet food industry with interviews from veterinarians and pet owners whose pets died, they allege, due to commercial packaged pet food. After premiering at the Catalina Film Festival on 2 October 2016, the film had an "on demand theatrical run" via Gathr, after which it became available on VOD platforms on 10 January 2017. The film is currently available to Netflix subscribers, as a digital download on iTunes or as a physical DVD via Amazon. The film, produced by Myla Films and directed/narrated by Kohl Harrington, was distributed by Gravitas Ventures. 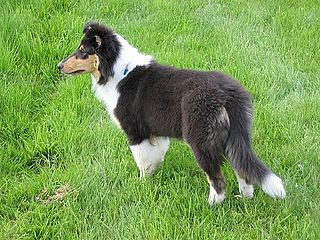 Hypoallergenic dog food diets are created for canines that experience food-related allergies causing adverse effects to their physical health. The molecules that usually become allergens are intact proteins or glycoproteins. Hypoallergenic dog food diets offer a variety of protein sources that are unique by using proteins that are not recognized by the dog's antibodies as being antigens, minimizing allergic reactions. Adding novel protein sources, such as novel meats that a dog or its ancestors have never been exposed to is one method. Novel proteins can also be created by chemically modifying well known protein sources using hydrolysis techniques, rendering proteins unrecognizable by the gastrointestinal tract. Not all antigens are specific to proteins, however, and it is possible for anything that the body ingests to become an allergen. Providing diets with a limited amount of ingredients can be used for diagnostic purposes, as well as for dogs who are allergic to the common ingredients that are used in pet food. Certain nutrients are commonly incorporated into hypoallergenic dog food to help alleviate the symptoms of an allergic reaction. These ingredients include omega-3 fatty acids, Vitamins A and E, zinc, novel carbohydrates, and fiber.

Like the human practice of veganism, vegan dog foods are those formulated with the exclusion of ingredients that contain or were processed with any part of an animal, or any animal byproduct. Vegan dog food may incorporate the use of fruits, vegetables, cereals, legumes, nuts, vegetable oils, and soya, as well as any other non-animal based foods. The omnivorous domestic canine has evolved to metabolize carbohydrates and thrive on a diet lower in protein, and therefore, a vegan diet is nutritionally adequate for dogs if properly formulated and balanced. Dogs can also thrive on a vegetarian diet.