Hitcham was a village in Buckinghamshire, England. Today it is indistinguishable from the extended village of Burnham (where the 2011 Census was included) and is no longer marked on Ordnance Survey 1:50000 maps as a separate settlement. [1] It is to the west of Burnham, close to the village of Taplow, and adjacent to the common on which Burnham Beeches stands.

The village name 'Hitcham' is Anglo Saxon in origin, and means 'Hycga's homestead'. In the Domesday Book of 1086 the village was recorded as Hucheham.

The civil parish of Hitcham was abolished in 1934 under a County Review Order, with the urban part going to Burnham parish, a larger but less populous part going to Taplow, and a tiny sliver going to Dorney. 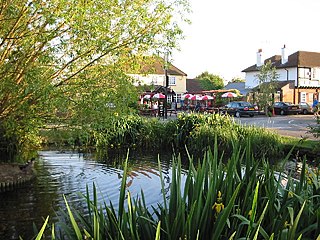 Cippenham is a suburb of the unitary authority of Slough. Originally in the county of Buckinghamshire, England it was transferred to Berkshire from Buckinghamshire in 1974. Slough became a unitary authority on 1 April 1998, with the abolition of Berkshire County Council and the 1973–1998 Borough. Close by are the neighbouring towns and villages of Beaconsfield, Farnham Common, Burnham, Gerrards Cross, Stoke Poges, Windsor and Taplow.

Wexham is a civil parish in the county of Buckinghamshire in southern England. It is on the boundary of the unitary authority of Slough, its post town. Wexham Park Hospital is a large hospital on the parish border and Burnham Beeches, a forest takes in small parts of its northern land. 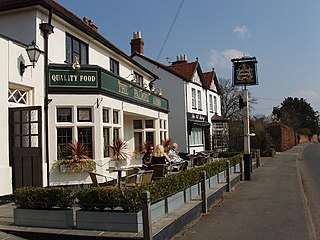 Dorney is a village and civil parish in the Unitary Authority of Buckinghamshire, England, bordering on the River Thames to the west and south and bisected by the Jubilee River. In 2011 it had a population of 752 and it is 2.3 miles (3.7 km) west of neighbouring Eton which is a slightly larger parish.

Burcott is a hamlet in the parish of Wing(where at the 2011 Census the population was included ), Buckinghamshire, England. Burcott is a common place name in the English language. The place name is Old English and refers to a fortified cottage.

Botolph Claydon is a hamlet in the civil parish of East Claydon, in Buckinghamshire, England. It is situated about 9 miles (14 km) east of Bicester in Oxfordshire, and 7 miles (11 km) north west of Aylesbury. 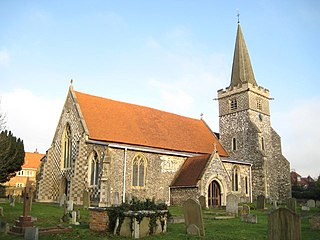 Burnham is a large village and civil parish that lies north of the River Thames in Buckinghamshire, between the towns of Maidenhead and Slough, about 24 miles west of Charing Cross, London. It is probably best known for the nearby Burnham Beeches woodland.

Egypt is a hamlet in the South Bucks district of Buckinghamshire, England. It is located within Farnham Royal civil parish, just to the north of Farnham Common, and on the edge of Burnham Beeches.

Taplow is a village and civil parish in the Unitary Authority of Buckinghamshire, England. It sits on the left bank of the River Thames, facing Maidenhead in the neighbouring county of Berkshire, with Cippenham and Burnham to the east. It is the south-westernmost settlement in Buckinghamshire. 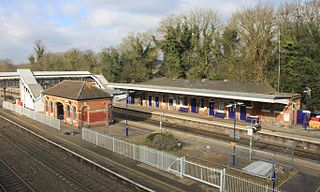 Taplow railway station serves the village of Taplow in Buckinghamshire, England. It is 22 miles 39 chains (36.2 km) down the line from London Paddington and is situated between Burnham to the east and Maidenhead to the west.

Beaconsfield is a constituency represented in the House of Commons of the UK Parliament since 2019 by Joy Morrissey of the Conservative Party.

Burnham Market is an English village and civil parish near the north coast of Norfolk. Burnham Market is one of the Burnhams, a group of adjacent villages. It results from a merger of three original villages: Burnham Sutton, Burnham Ulph and Burnham Westgate.

North Creake is a village and civil parish in the north west of the English county of Norfolk. It covers an area of 14.99 km2 (5.79 sq mi) and had a population of 414 in 184 households at the 2001 census, reducing to 386 at the 2011 Census. For the purposes of local government, it falls within the district of King's Lynn and West Norfolk. The parish shares boundaries with the adjacent parishes of Burnham Market, Burnham Thorpe, Holkham, Walsingham, South Creake, Barwick and Stanhoe. 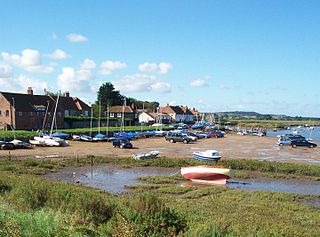 Burnham Overy is a civil parish on the north coast of Norfolk, England. In modern times a distinction is often made between the two settlements of Burnham Overy Town, the original village adjacent to the medieval parish church and now reduced to a handful of houses, and Burnham Overy Staithe, a rather larger hamlet about 1-mile (1.6 km) away and next to the creek-side harbour.

Little Meadle is a hamlet in Buckinghamshire, England. It is part of the civil parish of Longwick-cum-Ilmer and is located between the hamlets of Owlswick and Meadle. It is approximately 5 miles (8.0 km) from Aylesbury and 20 miles (32 km) from Oxford. In addition to the Farm House it consists of a collection of houses built over the past 60 years, and it gained an official name with the Royal Mail in 2004, as well as being mapped with the Ordnance Survey 2006. The term Little Meadle is a relatively new one it has no historical meaning in itself, except that it is close to the village of Meadle and is a small hamlet that was previously known only by the name of the road in which it is situated Stockwell Lane.

Eton was a rural district in the administrative county of Buckinghamshire, England. It was named after but did not contain Eton, which was an urban district.

The Counties Act 1844, which came into effect on 20 October 1844, was an Act of Parliament of the United Kingdom which eliminated many outliers or exclaves of counties in England and Wales for civil purposes. The changes were based on recommendations by a boundary commission, headed by the surveyor Thomas Drummond and summarized in a schedule attached to the Parliamentary Boundaries Act 1832. This also listed a few examples of civil parishes divided by county boundaries, most of which were dealt with by later legislation.

Span Developments Limited was a British property development company formed in the late 1950s by Geoffrey Townsend working in long and close partnership with Eric Lyons as consultant architect. During its most successful period in the 1960s, Span built over 2,000 homes in London, Surrey, Kent and East Sussex – mainly two and three bedroom single-family homes and apartment buildings. 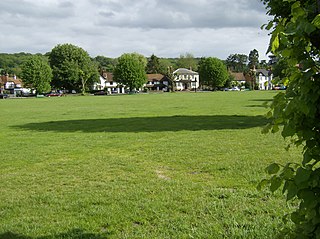 Wooburn Green is a village in the civil parish of Wooburn, Buckinghamshire, England.

Well End is a hamlet in the parish of Little Marlow, in Buckinghamshire, England. It is situated on the north-west side of the village of Bourne End. Although it lies in a separate parish, it is geographically contiguous with and subordinate to Bourne End; but unlike most of the hamlets consumed by its larger neighbour, it retains a distinct character, and the use of the name is common and well recognised locally.