Last updated September 11, 2020
Not to be confused with Information economics.

There are numerous characterizations of the transformations some economies have undergone. Service economy, high-tech economy, late-capitalism, post-Fordism, and global economy are among the most frequently used terms, having some overlaps and contradictions among themselves. Closer terms to information economy would include knowledge economy

A mixed economy is variously defined as an economic system blending elements of a market economy with elements of a planned economy, free markets with state interventionism, or private enterprise with public enterprise. While there is no single definition of a mixed economy, one definition is about a mixture of markets with state interventionism, referring specifically to a capitalist market economy with strong regulatory oversight and extensive interventions into markets. Another is that of an active collaboration of capitalist and socialist visions. Yet another definition is apolitical in nature, strictly referring to an economy containing a mixture of private enterprise with public enterprise. Alternatively, a mixed economy can refer to a socialist economy that allows a substantial role for private enterprise and contracting within a dominant economic framework of public ownership. This can extend to a Soviet-type planned economy that has been reformed to incorporate a greater role for markets in the allocation of factors of production.

The knowledge economy is the use of knowledge to create goods and services. In particular, it refers to a high portion of skilled workers in the economy of a locality, country, or the world, and the idea that most jobs require specialized skills. In particular, the main personal capital of knowledge workers is knowledge, and many knowledge worker jobs require much thinking and manipulating information as opposed to moving or crafting physical objects. It stands in contrast to an agrarian economy or an industrialized economy. Knowledge economy emphasizes the importance of skills in a service economy, the third phase of economic development, also called a post-industrial economy. It is related to the terms information economy, which emphasizes the importance of information as non-physical capital, and digital economy, which emphasizes the degree to which information technology facilitates trade. For companies, intellectual property such as trade secrets, copyrighted material, and patented processes become more valuable in a knowledge economy than in earlier eras.

Outsourcing is an agreement in which one company hires another company to be responsible for a planned or existing activity that is or could be done internally, and sometimes involves transferring employees and assets from one firm to another.

In the field of management, strategic management involves the formulation and implementation of the major goals and initiatives taken by an organization's top managers on behalf of owners, based on consideration of resources and an assessment of the internal and external environments in which the organization operates. Strategic management provides overall direction to an enterprise and involves specifying the organization's objectives, developing policies and plans to achieve those objectives, and then allocating resources to implement the plans. Academics and practicing managers have developed numerous models and frameworks to assist in strategic decision-making in the context of complex environments and competitive dynamics. Strategic management is not static in nature; the models often include a feedback loop to monitor execution and to inform the next round of planning.

In sociology, industrial society is a society driven by the use of technology to enable mass production, supporting a large population with a high capacity for division of labour. Such a structure developed in the Western world in the period of time following the Industrial Revolution, and replaced the agrarian societies of the pre-modern, pre-industrial age. Industrial societies are generally mass societies, and may be succeeded by an information society. They are often contrasted with traditional societies.

The creative industries refers to a range of economic activities which are concerned with the generation or exploitation of knowledge and information. They may variously also be referred to as the cultural industries (especially in Europe or the creative economy, and most recently they have been denominated as the Orange Economy in Latin America and the Caribbean.

Knowledge workers are workers whose main capital is knowledge. Examples include programmers, physicians, pharmacists, architects, engineers, scientists, design thinkers, public accountants, lawyers, and academics, and any other white-collar workers, whose line of work requires one to "think for a living".

Post-capitalism is a state in which the economic systems of the world can no longer be described as forms of capitalism. Various individuals and political ideologies have speculated on what would define such a world. According to some classical Marxist and some social evolutionary theories, post-capitalist societies may come about as a result of spontaneous evolution as capitalism becomes obsolete. Others propose models to intentionally replace capitalism. The most notable among them are socialism and anarchism.

The following outline is provided as an overview of and topical guide to business: 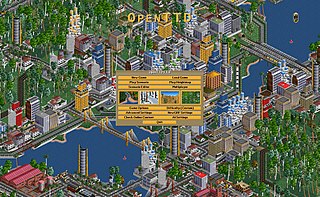 Business simulation games, also known as economic simulation games or tycoon games, are games that focus on the management of economic processes, usually in the form of a business. Pure business simulations have been described as construction and management simulations without a construction element, and can thus be called management simulations. Indeed, micromanagement is often emphasized in these kinds of games. They are essentially numeric, but try to hold the player's attention by using creative graphics. The interest in these games lies in accurate simulation of real-world events using algorithms, as well as the close tying of players' actions to expected or plausible consequences and outcomes. An important facet of economic simulations is the emergence of artificial systems, gameplay and structures.

George T. Haley is an American author and academic, currently a tenured Professor of Industrial and International Marketing at the University of New Haven, Connecticut, USA. He is also the Director of the Center for International Industry Competitiveness. His research covers Industrial marketing, Emerging markets, New Product Development, Innovation and B2B Marketing. He has testified on his research on China before the United States Congress and several government agencies. The American Marketing Association's Marketing News named him as one of six Marketing academics to watch based on his research, teaching and broader impact. He was also named an American Made Hero for his work on the ramifications of trade for US manufacturing in a global economy.

In business management theory, the smiling curve is a graphical depiction of how value added varies across the different stages of bringing a product on to the market in an IT-related manufacturing industry. The concept was first proposed around 1992 by Stan Shih, the founder of Acer Inc., an IT company headquartered in Taiwan. According to Shih's observation, in the personal computer industry, the two ends of the value chain – conception and marketing – command higher values added to the product than the middle part of the value chain – manufacturing. If this phenomenon is presented in a graph with a Y-axis for value-added and an X-axis for value chain, the resulting curve appears like a "smile".

A knowledge market is a mechanism for distributing knowledge resources. There are two views on knowledge and how knowledge markets can function. One view uses a legal construct of intellectual property to make knowledge a typical scarce resource, so the traditional commodity market mechanism can be applied directly to distribute it. An alternative model is based on treating knowledge as a public good and hence encouraging free sharing of knowledge. This is often referred to as attention economy. Currently there is no consensus among researchers on relative merits of these two approaches.

Although information has been bought and sold since ancient times, the idea of an information marketplace is relatively recent. The nature of such markets is still evolving, which complicates development of sustainable business models. However, certain attributes of information markets are beginning to be understood, such as diminished participation costs, opportunities for customization, shifting customer relations, and a need for order.

The network economy is the emerging economic order within the information society. The name stems from a key attribute - products and services are created and value is added through social networks operating on large or global scales. This is in sharp contrast to industrial-era economies, in which ownership of physical or intellectual property stems from its development by a single enterprise. Business models for capturing ownership rights for value embedded in products and services created by social networks are being explored.

Knowledge policies provide institutional foundations for creating, managing, and using organizational knowledge as well as social foundations for balancing global competitiveness with social order and cultural values. Knowledge policies can be viewed from a number of perspectives: the necessary linkage to technological evolution, relative rates of technological and institutional change, as a control or regulatory process, obstacles posed by cyberspace, and as an organizational policy instrument.