Built in the Victorian Period, the school was originally split into both a secondary school and a primary, although after Market Place the need for a primary decreased and the building was merged in 1909, keeping primary pupils until the statutory leaving age of 14, the other taking the pupils who had passed their Qualifying exam on to higher education. This was the founding of the building known as Inverurie Academy. Since then, new parts of the school have been added, the most recent in the mid 1980s. A new building is scheduled to be built to replace the old in 2020.

The buildings remained that way until they were joined in the 1950s, and amalgamated in the 1960s with the building of the new Assembly Hall. The final stage of building was constructed in the 1980s. [2] The school will be transitioning to the newly built Inverurie Community Campus in the 2020/2021 school year

Inverurie is a Royal Burgh and town in Aberdeenshire, Scotland at the confluence of the rivers Ury and Don, about 16 miles (26 km) north west of Aberdeen.

Harlaw Academy is a six-year comprehensive secondary school situated 200 yards from the junction of Union Street and Holburn Street in the centre of Aberdeen, Scotland. It is directly adjacent to St Margaret's School for Girls. The academy draws most of its pupils from its associated primary schools, namely, Broomhill Primary School, Ferryhill Primary School and Kaimhill Primary School. David Innes has been headteacher since January 2013. 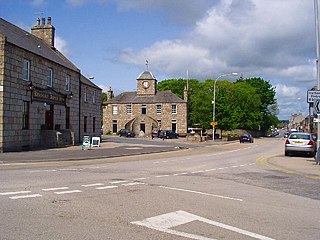 Lenzie is a small, affluent town by the Edinburgh and Glasgow Railway in the East Dunbartonshire council area of Scotland. It is about 6 miles (10 km) north-east of Glasgow city centre and 1 mile (2 km) south of Kirkintilloch. At the 2011 census, it had a population of 8,873. The ancient barony of Lenzie was held by William de Comyn, Baron of Lenzie and Lord of Cumbernauld in the 12th century.

Insch is a village in the Garioch, Aberdeenshire, Scotland. It is located approximately 28 miles (45 km) from the city of Aberdeen.

Oldmeldrum is a village and parish in the Formartine area of Aberdeenshire, not far from Inverurie in North East Scotland. With a population of around 2,187, Oldmeldrum falls within Scotland's top 300 centres of population. Oldmeldrum is home to one of the oldest whisky distilleries in Scotland, Glen Garioch, which was built in 1797. Local industries are agriculture and engineering services connected to the oil industry in Aberdeen.

Flegg High Ormiston Academy is an 11–16 secondary school with academy status in Martham, Great Yarmouth, Norfolk, England. It was built in the 1960s for boys and girls aged 12–16. Much of the school has been expanded over the years and in 2006/07 major building work was undertaken to accommodate the inclusion of Year 7 pupils, and generally update the buildings, bringing the school roll in September 2007 up to near 1,000 pupils.

Methlick is a village in the Formartine area of Aberdeenshire, Scotland, situated on the River Ythan 11.2 kilometres (7.0 mi) north-west of Ellon.

Kemnay Academy is a secondary school in Kemnay, Aberdeenshire, situated on the banks of the River Don. It is one of seventeen secondary schools run by Aberdeenshire Council and has roughly 820 pupils. The current rector is Lizbeth Paul, who took up post in August 2015.

Tullynessle is a hamlet in Aberdeenshire, Scotland, three miles NNW of Alford.

Babington Academy, previously known as Babington Community College, is an 11 – 16 secondary school, located in the Beaumont Leys area of Leicester in the English county of Leicestershire.