Iti Tyagi is an Indian designer and social entrepreneur. In 2015, she set up Craft Village which aims to connect artisans making handicrafts directly with buyers and patrons. She received the 2018 Nari Shakti Puraskar in recognition for her work empowering women.

Iti Tyagi studied Fashion Design and Clothing Technology at the National Institute of Fashion Technology. [1] She then studied interior design at the KLC School of Design in London. [2]

Tyagi is a designer in the fields of metalwork, woodwork, glassblowing and embroidery, and is also interested in sustainable development. [3] In 2017 and 2018, her work was featured in two Craft Béton luxury collections centred around the use of cement. [4] [5] This resulted in a 2020 partnership to source producers making items for Craft Béton's Delhi gallery. [6] In 2019, she exhibited a table made from cement in the Louis Quinze style. [2] She has also worked with the National Institute of Design and the Entrepreneurship Development Institute. [1]

She began the social enterprise Craft Village with her husband Somesh Singh in 2015, aiming to put people making handicrafts directly in contact with buyers, [7] [8] thus helping rural artisans to meet urban patrons. [9] She also set up India Craft Week, International Craft Day and the International Craft Awards. [8] The Indian handicrafts industry is expected to be worth $60 billion by the year 2024, and in the 2018–2019 financial year, the revenue of Craft Village was ₹26,700,000. [8] Through Craft Village, Tyagi trained handicrafts workers from Balakatti, Firozabad, Kutch, Moradabad and Saharanpur. [10]

During the COVID-19 pandemic, Tyagi designed cement fabric personal protective equipment (PPE) suits for health professionals which are made from 50% natural and 50% synthetic materials. These suits have less environmental impact when disposed of, since normal suits are 100% synthetic. [11] The third edition of India Craft Week went online for 2020. [12]

Tyagi founded the group Pet Parents Association which promotes the rights of pets and their owners. She was motivated by her experiences as a dog owner living in Gurugram and New Delhi. [13] The group cares for stray dogs, promotes animal welfare and represents owners in disagreements with resident welfare associations. [13] [14]

Recognising her work empowering women, President Ram Nath Kovind presented Tyagi with the Nari Shakti Puraskar on International Women’s Day in 2019. [10] After receiving it she said "I urge every woman to come out of their shells and to break the stereotype". [10]

Nari Shakti Puraskar is an annual award given by the Ministry of Women and Child Development of the Government of India to individual women or to institutions that work towards the cause of women empowerment. The awards are presented by the President of India on International Women's Day, at Rashtrapati Bhavan in New Delhi. The awards were instituted in 1999 under the title of Stree Shakti Puraskar and were renamed and reorganised in 2015. There are given in six institutional and two individual categories, which carry a cash prize of rupees two-lakh and one-lakh, respectively.

Qamar Dagar is an Indian calligrapher. She is the founder of the Qalamkaari Creative Calligraphy Trust. In 2016, she was awarded the Nari Shakti Puraskar, India's highest civilian award for women.

Nilza Wangmo is an Indian restaurant owner and an enthusiast for the local food of the Ladakh region of northern India. Her work in 2019 was recognised with the highest award for women in India – Nari Shakti Puraskar.

Arifa Jan is an Indian activist for felt rug making in Srinagar in Kashmir. Jan was awarded the Nari Shakti Puraskar on 8 March 2020. 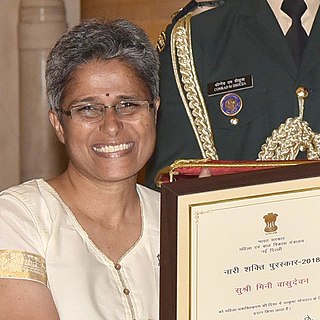 Mini Vasudevan is an Indian animal rights activist based in Coimbatore. She was awarded the Nari Shakti Puraskar in 2019.

Chami Murmu is known for plantings trees in India. When she was awarded the Nari Shakti Puraskar award in 2020 she had been involved with planting 2,500,000 trees.

Latika Thukral is an Indian banker who transformed her city. In particular a huge park, Aravali Biodiversity Park in Gurgaon where they targeted planting a million native trees in the group #IAmGurgaon. She was awarded the Nari Shakti Award in 2015 by the President of India.

Pamela Gale Malhotra is an American animal sanctuary owner who lives in India. She was awarded India's highest award for women, the Nari Shakti Puraskar for her work at the SAI Sanctuary.

Zuboni Hümtsoe was a Naga woman who started an online fashion and handicraft brand called PreciousMeLove in Nagaland. She was given the Nari Shakti Puraskar, a national award.

Sunita Devi is an Indian mason honoured for building toilets. In her village 90% of the women did not have access to a toilet. After her work they all now have access. She was given the Nari Shakti Puraskar award in 2019 by the President of India.

Snehlata Nath is an Indian activist known for her work with the Nilgiris. She has received the Jamnalal Bajaj Award and the Nari Shakti Puraskar.

Lizymol Philipose Pamadykandathil is an Indian dental materials scientist. Her work has been recognised with a Nari Shakti Puraskar - the highest civilian honour for women in India

Rashmi Anand is an Indian activist and writer concerned about domestic violence. The President of India awarded her the Nari Shakti Puraskar. This is the highest award for women in India. She founded the "Woman of the Elements Trust" which supplies support to victims of domestic abuse in Delhi.

Prof. Nanditha Krishna is an Indian author and activist. She was recognised by the government of India who gave her a Nari Shakti Award in 2015. This is the highest award for women in India and eight awards were made that year. She leads the C. P. Ramaswami Aiyar Foundation in Chennai. 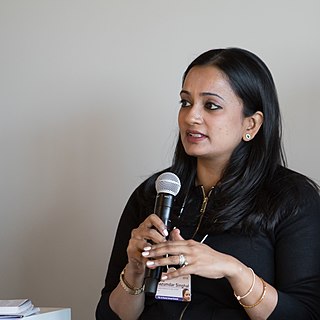 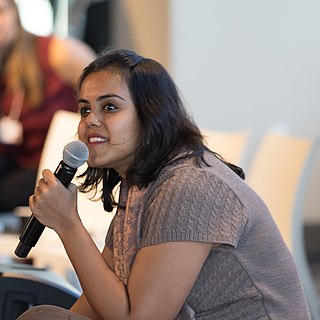 Neha Kirpal is the founder of the India Art Fair in 2008. She sold her interest in the Fair after ten years.

Shakuntala Majumdar is an Indian animal rights activist who was awarded the Nari Shakti Puraskar for her work for the Society for Protection of Cruelty to Animals in Thane. 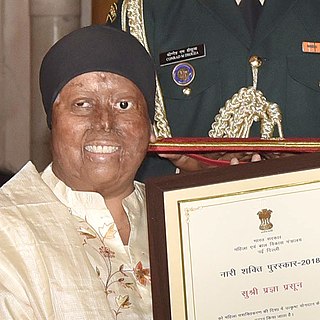 Pragya Prasun is an Indian activist who survived an acid attack and set up the Atijeevan Foundation. The organisation has supported more than 250 other survivors and in 2019, she received the Nari Shakti Puraskar awarded the Government of India in recognition of her work.

Hekani Jakhalu Kense is an Indian lawyer and social entrepreneur. She set up the non-governmental organization YouthNet Nagaland to help the young people of Nagaland pursue business opportunities. She was recognised with the Nari Shakti Puraskar award in 2018.