Jasmin Karina Paris (born November 1983 [1] ) is a British runner who has been a national fell running champion and who has set records for the Bob Graham Round and the Ramsay Round.

She is well known in Great Britain as a fell runner, but became known on the international stage as a sky runner after her victory in the 2016 Skyrunner World Series (Sky Extreme) [2] and bronze medal at the 2016 Skyrunning World Championships (Sky Ultra). [3] She received significant media attention for her overall win in the 2019 Spine Race. [4]

She is the daughter of mathematicians Jeff Paris and Alena Vencovská. [5]

While at the University of Liverpool, Paris was a member of the Open Air Club which encouraged outdoor pursuits. [6] However, she did not start running until she left university in 2008 and was working in Glossop near her home town of Hadfield in Derbyshire, although she had done some backpacking and walked a lot in the fells. After a twelve-month sabbatical in Minnesota, she returned to the UK, moved to Edinburgh in 2010 and began to take running more seriously. [7]

She has performed particularly well in the longer fell races. Her wins include Wasdale, the Three Peaks Race, Borrowdale, the Langdale Horseshoe, the Isle of Jura and the Ennerdale Horseshoe [8] and she has won the Lakeland Classics Trophy series. [9]

In 2015, Paris began to be more prominent in ultra distance running. In April that year, she set a new women's record of 11:09 in the Fellsman, finishing fourth overall, [12] and in June, she was the first female finisher and second overall in the five-day Dragon's Back Race in Wales. [13]

In July 2016, Paris took third place in the Buff Epic Trail 105K which was the 2016 Skyrunning World Championships race for the ultra category. [18] In August, she finished sixth at the UTMB, her first 100-mile race. [19]

In September, Paris was crowned champion in the Extreme series of the 2016 Skyrunner World Series, having won both the Tromsø SkyRace and the Glen Coe Skyline. [20] In October, she set a new women's record for the Paddy Buckley Round with a time of 18:33. [21]

Paris completed a circuit of twenty-nine Munros in the Cairngorms in July 2021, setting a women's record for climbing the most Munros and returning to the starting point within twenty-four hours. [24] Later the same year, she won the Ultra Tour Monte Rosa in Switzerland. [25]

In March 2022, Paris competed in the Barkley Marathons in Frozen Head State Park, Tennessee. She completed a "Fun Run" of three loops, the first time for nine years that a woman had done so. [26]

Paris was sponsored by Inov-8 until 2022, when she opted to run for the Green Runners, an environmental group of which she is a co-founder. [27]

In 2016, Paris married Konrad Rawlik who is also a runner with a win in the Fellsman. [28] They have two children. [29] Paris is a small-animal vet working at the University of Edinburgh and studied acute myeloid leukaemia. [30]

The Paddy Buckley Round, also known as the Welsh Classical Round, is a long distance fell running challenge in Snowdonia, Wales. The route is a circuit of just over 100 km long taking in some 47 summits. The Round has the reputation of being somewhat tougher to complete than its English Lake District equivalent, the Bob Graham Round.

The Ramsay Round, also known as the Charlie Ramsay Round, is a long distance hill running challenge near Fort William, Scotland. The route is a circuit of 58 miles, taking in 24 summits with a total climb of around 28,500 feet. Ben Nevis, Great Britain's highest peak, is included in the route along with 22 other Munros. Originally, all 24 summits on the Ramsay Round were Munros, but Sgurr an Iubhair was declassified as a Munro in 1997. The route was devised by Charlie Ramsay as an extension to an existing 24-hour walking route, and first completed by Ramsay on 9 July 1978. 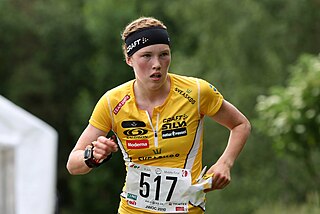 Nicola "Nicky" Spinks is a British long-distance runner, specialising in fell running, who set women's records for the major fell-running challenges the Ramsay Round, the Paddy Buckley Round and the Bob Graham Round.

Finlay Wild is a Scottish runner and mountaineer who was a British fell running champion. He has won the Ben Nevis Race ten times.

Skyline Scotland is a set of annual skyrunning races which take place on consecutive days in the mountains around Kinlochleven in Lochaber. The main races are the Mamores VK, the Ring of Steall Skyrace, the Ben Nevis Ultra and the Glen Coe Skyline. 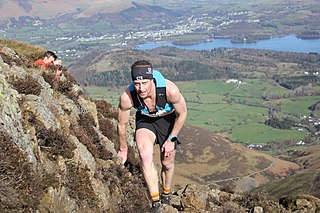 Ricky William Lightfoot is a British runner who has been a world champion in trail running and a medallist in the World Long Distance Mountain Running Challenge.

Bruno Brunod is an Italian athlete, a bicyclist who began running late, when he was in his thirties. He is twice world champion of the Skyrunner World Series and holds numerous speed records for climbing and descending some of the highest mountains in the world, like the Matterhorn in 1995, broken only in 2013 by a professional 25 years younger than him, Kílian Jornet Burgada. As of 2016 his speed records for the Monte Rosa in 1997 and the Aconcagua in Argentina in 2000 remained unbroken. Brunod produces results like a professional athlete, but has retained the spirit and humility of an amateur, for which he is widely admired especially amongst fellow mountain runners. 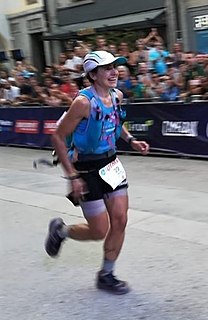 Carol Morgan is an Irish ultrarunner, who specialises in non-stop mountain ultramarathons 100 km and longer, often in challenging conditions with significant ascents / descents. Born in Dublin in 1973, where she trained as a nurse, she is an advanced practitioner in emergency medicine. Morgan holds the course record for endurance ultra event, the Kerry Way Ultra.

Yuri Yoshizumi is a Japanese ultra runner and skyrunner. She won the Asian Vertical Kilometre Skyrunning Championship in 2016, placed second in the Vertical Kilometer World Circuit in 2019 and won a number of individual events including the 2019 Transvulcania Marathon and the Fuji Mountain Race in 2017, 2018 and 2019.

John Wade Kelly is an American endurance athlete who specializes in ultrarunning.