As to his inspiration for launching the magazine, Wallman—speaking on a panel on Jews in baseball at the Cooperstown Baseball Hall of Fame—said: "I was always curious to know who was Jewish as a kid. And there wasn't a list." [19]

JSR provides information as to who is Jewish in the sports world, verifying the Jewish background of every athlete covered. [4] [5] JSR's criteria are that an athlete is Jewish if at least one parent is Jewish, he did not practice any other religion during his athletic career, and he self-identifies as ethnically Jewish. [19] [20] [21] If an athlete has a Jewish parent but was raised in, or converted to, another faith, or indicated to JSR that he did not wish to be considered Jewish, he is excluded (even though under Jewish law he might be considered Jewish). [20] Moxson indicates that David Beckham is not included, as only his mother's father is Jewish, and he does not identify himself as Jewish. [22]

Some athletes are not "obviously" Jewish, such as former major league baseball player, Rubén Amaro, Jr. [3] JSR also lists athletes frequently misidentified as Jewish, among them second baseman Rod Carew ("never converted, although his children were raised Jewish"), pitcher Mike LaCoss ("born Marks, but took his stepfather's name and becomes irate when he is categorized as a Jew"), and quarterback Rex Grossman (who is German-Catholic). [5] [24]

In 2009, as Jewish baseball players Ryan Braun, Ian Kinsler, and Kevin Youkilis were leading in voting for their positions on their All Star teams, JSR noted that 160 Jews had played in the major leagues. [25]

The New York Daily News reported that according to JSR, there were almost three dozen Jews in baseball before Hank Greenberg, but unlike Greenberg many had changed their names as they played in the majors. Michael Silverman changed his name to Baker, Rosenblum to Bennett, Lifsit to Bostwick, Solomon to Reese, and Makowsky to Markel. [6] And Bohne, Cooney, Ewing, Kane, and Corey were all Cohens in the off-season. [6]

When the American Jewish Historical Society published a set of baseball cards of Jews in the major leagues, the project founder, Martin Abramowitz of Jewish Major Leaguers Inc., relied on research by JSR. [19] [26] [27] Also, when the Israel Baseball League was active, teams in it would recruit top college baseball players from the JSR's Jewish All-Americans in NCAA Divisions I, II, and III. [28]

Jon Scheyer, later an All-American captain of the 2010 Duke national championship team, led his high school team of five Jewish starters to an Illinois state championship. Afterward, The Forward quoted Wallman as speculating that an all-Jewish starting lineup may have won a state title in the 1940s, but that it had not happened in the recent past.

Peter Horvitz, in The Big Book of Jewish Sports Heroes: An Illustrated Compendium of Sports History and The 150 Greatest Jewish Sports Stars (2007), calls Wallman the "best and most dependable source of up-to-date information on the subject" of Jews in sports. [29] Joseph Siegman, in his book Jewish Sports Legends: the International Jewish Hall of Fame (2005), listed Moxson as a distinguished authority on sports. [30] The New York Times noted that JSR "aims to be rigorously comprehensive". [3] Sports Illustrated called JSR "tireless in its service mission". [5] 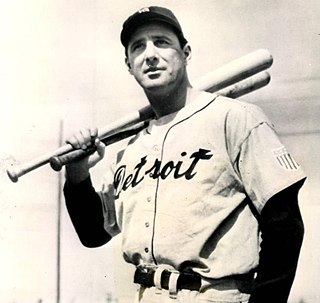 Henry Benjamin Greenberg, nicknamed "Hammerin' Hank", "Hankus Pankus", or "The Hebrew Hammer", was an American professional baseball player and team executive. He played in Major League Baseball (MLB), primarily for the Detroit Tigers as a first baseman in the 1930s and 1940s. A member of the Baseball Hall of Fame and a two-time Most Valuable Player (MVP) Award winner, he was one of the premier power hitters of his generation and is widely considered as one of the greatest sluggers in baseball history. He had 47 months of military service including service in World War II, all of which took place during what would have been prime years in his major league career. 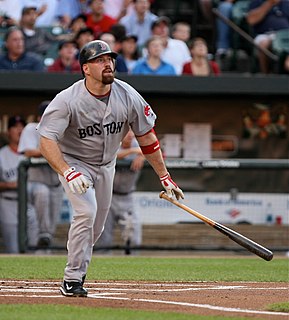 Kevin Edmund Youkilis, nicknamed "Youk", is an American former professional baseball first baseman and third baseman, who primarily played for the Boston Red Sox. A native of Cincinnati, Ohio, he was drafted by the Red Sox in 2001, after playing college baseball at the University of Cincinnati. He played in Major League Baseball (MLB) for the Red Sox, the Chicago White Sox, and the New York Yankees. He is currently a special assistant to the Chicago Cubs and former Red Sox GM Theo Epstein. 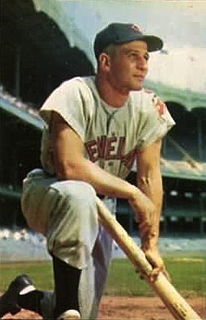 Albert Leonard Rosen, nicknamed "Flip" and "The Hebrew Hammer", was an American baseball third baseman and right-handed slugger in Major League Baseball for ten seasons in the 1940s and 1950s. 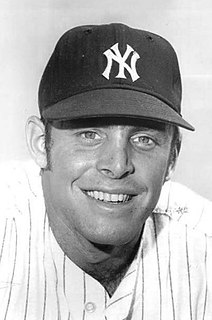 Ronald Mark Blomberg, nicknamed Boomer, is an American former professional baseball player and minor league manager. He played in Major League Baseball as a designated hitter, first baseman, and right fielder. He played for the New York Yankees and Chicago White Sox (1978), and was the manager of the Bet Shemesh Blue Sox in the Israel Baseball League (2007). He was the first designated hitter in Major League Baseball history. He batted left-handed, and threw right-handed.

The International Jewish Sports Hall of Fame was opened July 7, 1981 in Netanya, Israel. It honors Jewish athletes and their accomplishments from anywhere around the world.

Ian Michael Kinsler is an Israeli-American former professional baseball second baseman, and currently a member of the Israeli national baseball team. He is an advisor in the front office for the San Diego Padres. He played in Major League Baseball (MLB) for 14 seasons for the Texas Rangers, Detroit Tigers, Los Angeles Angels, Boston Red Sox, and San Diego Padres. Kinsler was a four-time All Star, two-time Gold Glove winner, and a member of the 2018 World Series champion Boston Red Sox.

Gaston Salmon was a Belgian épée, foil, and sabre fencer. He was Jewish.

Marilyn Ramenofsky is an American former competition swimmer, Olympic medalist, and former world record-holder. She is currently a researcher at the University of California at Davis, studying the physiology and behavior of bird migration. She has previously done research at the University of Washington in Seattle.

Donald Smith Cohan is one of the leading yachtsmen in the U.S. He was the first Jew to compete at the highest levels of world yachting competitions and at the time of his active career, the only Jew to win an Olympic medal in yachting.

Jews and Baseball: An American Love Story is a 2010 American documentary film narrated by Academy Award winner Dustin Hoffman, written by Pulitzer Prize winner Ira Berkow, and directed by award-winning documentary filmmaker Peter Miller. It is about the connection and history between American Jews and baseball.

The Qualifying Round of the 2013 World Baseball Classic was held from September 19 to November 19, 2012. Although the 2006 and 2009 editions of the World Baseball Classic were contested by the same pre-selected field of 16 teams, for the 2013 tournament only the 12 teams that won at least one game in 2009 were guaranteed a berth in the main tournament. The other four contested the qualifying round along with 12 additional teams invited by the International Baseball Federation (IBAF).

Qualifier 1 of the Qualifying Round of the 2013 World Baseball Classic was held at Roger Dean Stadium, Jupiter, Florida, United States from September 19 to 23, 2012.