Joan V. Hartley is an American politician. A Democrat, she has been a state senator from Connecticut since 2001.

A resident of Middlebury, she represents all of Waterbury, the northern part of Naugatuck and the northeastern part Middlebury. [1] Hartley was born in Waterbury and graduated from Elms College and received a M.A. from Trinity College. [2] Prior to being elected to the Senate, Hartley served as a Connecticut state representative representing the 73rd District from 1984 to 2000. [3]

Hartley's predecessor as a state representative was future Governor John G. Rowland. Hartley is generally considered among the more conservative and bipartisan members of the Democratic caucus. In 2007 she was believed to be the sole holdout from the strategy of Senate President Donald E. Williams, Jr. to override Governor M. Jodi Rell's veto of a Democratic state bonding package. Rell had vetoed the package claiming it put the state too far into debt. Hartley opposed a billion-dollar commitment to the Connecticut State University system and has been threatened with retribution from Democratic party leadership. [4] [5]

On October 30, an agreement was reached between the Rell Administration, legislative Democratic leaders, and Hartley to resolve the bonding stalemate. The final bonding package was reduced by $400 million from the level vetoed by Rell and increased oversight was placed on funds for the Connecticut State University system. [6]

The Courant later reported that pressure was placed on fellow senators against Hartley by Senator Thomas Gaffey, who had an undisclosed intimate relationship with the lobbyist for the university system. [7] In December 2008, Hartley was removed as the Chairwoman of the Higher Education Committee because of her independence and willingness to stand up to the Democratic leadership who was shielding Gaffey. [8]

In 2008, Hartley was one of three Democrats who supported Rell's proposal for a Three Strikes Law against career violent criminals.[ citation needed ] In 2009, Hartley was the only Democrat in the State Senate that did not vote to override Rell's veto of the Healthcare Partnership bill, [9] thereby preventing the bill from becoming law. In 2011, Hartley and Paul Doyle were the only two Democrats to vote against transgender rights legislation. [10]

Mary Carolyn "Jodi" Rell is an American former Republican politician and the 87th Governor of the U.S. state of Connecticut from 2004 until 2011. Rell also served as the state's 105th Lieutenant Governor. 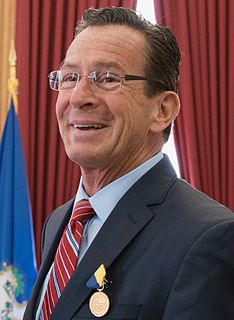 Dannel Patrick Malloy is an American politician, who served as the 88th governor of Connecticut from 2011 to 2019. A member of the Democratic Party, he chaired the Democratic Governors Association from 2016 to 2017. On July 1, 2019, he began his tenure as the Chancellor of the University of Maine System.

The 2006 United States Senate election in Connecticut was held November 7, 2006. Incumbent Democratic U.S. Senator Joe Lieberman lost the August 8 Democratic primary to Ned Lamont, but then formed his own third party and was reelected to a fourth term. Lieberman and Lamont both faced Alan Schlesinger, a Republican.

Thomas P. Gaffey is an American politician. Gaffey, a Democrat, had been a state senator from Connecticut since 1995, but left office due to criminal violations on January 5, 2011.

Gayle Slossberg is an American politician. A Democrat, Slossberg is a former seven term Connecticut State Senator having served between 2005 and 2019.

Sam S. F. Caligiuri is an American lawyer and former Connecticut State Senator. In 2010, he ran for the Republican nomination for U.S. Senate, but switched for a House seat in Connecticut's 5th congressional district. He was ultimately unsuccessful, losing behind Chris Murphy, 54-46%.

Paul Robert Doyle is an American politician. Doyle, a Democrat, has been a state senator from Connecticut since 2007.

Andrew J. McDonald is an American judge and former politician from Connecticut. He serves as an associate justice of the Connecticut Supreme Court.

Donald E. Williams Jr. was first elected to the Connecticut General Assembly in a special election in 1993. Prior to his service in the State Senate, he served two terms as the First Selectman for the town of Thompson. In July 2004, Senator Williams was elected to serve as the President Pro Tempore, the highest-ranking legislator in the Connecticut General Assembly. He was reelected to this post five times, in 2005, 2007, 2009, 2011, and 2013.

The 2010 Connecticut gubernatorial election took place on November 2, 2010, to elect the 88th Governor of Connecticut. Incumbent Republican Governor Jodi Rell had announced in a press conference in Hartford on November 9, 2009, that she would not seek re-election in 2010. The sites Cook Political Report and CQ Politics both rated the election as a toss-up. This was the first open seat gubernatorial election in the state since 1994.

SustiNet is a Connecticut health care plan passed into law in July 2009. Its goal was to provide affordable health care coverage to 98% of Connecticut residents by 2014. The name SustiNet derives from the motto of the State of Connecticut: "Qui transtulit sustinet.".

Rosa C. Rebimbas is a Republican member of the Connecticut House of Representatives since 2009, representing the 70th District around Naugatuck just south of Waterbury. She is the owner/sole proprietor of The Law Offices of Rosa C. Rebimbas, a general law firm in Naugatuck, Connecticut.

Carlo Leone is an American politician serving as the senior adviser to ConnDOT commissioner Joseph Giulietti. Leone formerly represented the 27th district of the Connecticut State Senate as a Democrat from 2011 until his resignation in 2021. While in the State Senate, he served as deputy president pro tempore and chair of the Transportation Committee. Leone also served in the Connecticut House of Representatives representing the 148th District from 2003 to 2011. As a Democrat, he served as the deputy majority whip in the House of Representatives.