Owchar was officially listed as the alternate for the Kevin Martin team, which he coached, at the 1991, 1992, 1995, 1996, and 1997 Briers. As the alternate, he won various medals with the team, including two Brier titles and a silver medal at the 1991 World Men's Curling Championship.

Owchar is a Level 3 certified curling coach by the National Coaching Certification Program.

Owchar began coaching Kevin Martin when he enrolled at NAIT in 1984. [6] Martin had enrolled at NAIT specifically to curl under Owchar, [3] and he and Martin were together for thirty years. [2] In their first few years together, Owchar coached Martin to a Canadian junior title and a silver medal at the World Junior Curling Championships. As they continued, Martin and Owchar made their first Brier appearance in 1991 representing Alberta, and won their first Brier title. Martin then lost the championship game in the world championship later that year. In the next six years, Martin and Owchar returned to the Brier four times, and finished within the top three all four times. However, Martin came up short at the world level, losing the semifinal at the world championship in 1997 and the gold medal game at the 2002 Winter Olympics, which had come down to a draw for the win. [6] Martin also missed another opportunity to represent Canada at the Olympics in 2005.

Martin returned to the Brier in 2006, but failed to advance in the playoffs. However, with a new team and with Owchar continuing to coach, Martin made the playoffs at the 2007 Tim Hortons Brier, won the 2008 and 2009 Briers, and won a gold and silver medal at the 2008 and 2009 world championships, respectively. [6] Then, the next year, Martin won the 2009 Canadian Olympic Curling Trials and the right to represent Canada at his third Olympics, and won his first gold medal at the 2010 Winter Olympics. [7] More recently, Owchar coached Martin to a bronze medal finish at the 2011 Tim Hortons Brier.

After Martin's retirement at the end of the 2014 season, Owchar was recruited by 2006 Olympic gold medalist Brad Gushue to coach his Newfoundland and Labrador team. [2] Since coming on board, the team has achieved much success under Owcher's tutelage, culminating in an emphatic win at the 2017 Tim Hortons Brier on home ground in St. John's and going undefeated to win the 2017 world championship in Edmonton. They repeated as Brier champions in 2018.

Owchar was named to Curling Canada's Hall of Fame at the 2019 Tim Hortons Brier. [2] 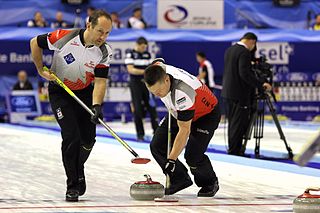 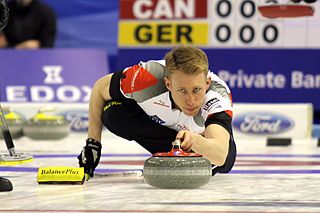 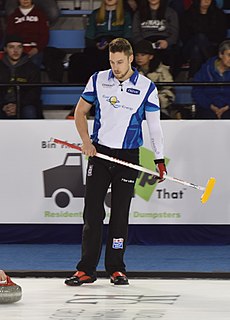 Mark Johnson is an American-Canadian curler from Edmonton, Alberta. He is a former World Senior Curling Champion. 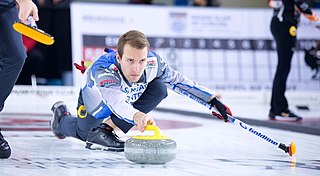 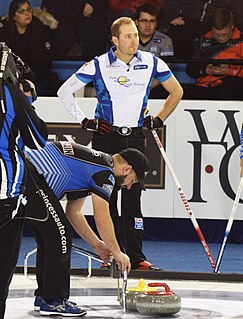 Geoff Walker is a Canadian curler, currently living in Edmonton, Alberta. He currently plays lead for the Brad Gushue rink. He is a two-time World Junior Champion and Men's World Champion.