Ken is a doll and fictional character introduced by Mattel in 1961 as the counterpart of Barbie, who was introduced two years earlier. Ken is from Willows, Wisconsin. [1] Similar to his female counterpart, Ken has a fashionable line of clothing and accessories (although he made his debut wearing only a swim suit [2] ). In the Barbie mythos, Ken met Barbie on the set of a TV commercial. He is Barbie’s boyfriend, as it is written on every box produced since 1961. Since his debut, Ken has held at over 40 occupations. He was invented by Elliot Handler.

Ken and Barbie have been described as two most popular dolls in the world. [3]

From 1961 to the debut of Superstar Ken in 1977, Ken had straight, arms that didn't bend. His head could only turn left and right. Ken's hair was made of felt in his first year (known to collectors as the "flocked" hair Ken), but this was replaced with a plastic, molded hairstyle when the felt hair was found to fall off when wet. [4] Superstar Ken featured a dimpled smile, a head that could swivel, bent arms, a more muscular physique, jewelry, and underwear permanently molded to his body. The woman who made the Ken doll made it to resemble her husband.

In 1993, "Earring Magic Ken" was released. The style of the doll was thought to resemble fashions and accessories worn by some segments of the gay community at the time, and "Earring Magic Ken" subsequently attained a cult following, becoming a collector's item. [6]

In February, 2004, Mattel announced a split for Ken and Barbie, with Russell Arons, vice president of marketing at Mattel, saying that Barbie and Ken "feel it's time to spend some quality time – apart...Like other celebrity couples, their Hollywood romance has come to an end", though Arons indicated that the duo would "remain friends". [7] In February, 2006 however, a revamped version of the Ken doll was launched, though it was stated that their relationship is still purely platonic. [8] [9] In 2011, Mattel launched a massive campaign for Ken to win Barbie's affections back. [10] The pair officially reunited in Valentine's Day 2011. [11]

Like Barbie, Ken is named after one of Ruth Handler's children, Ken Handler, who died in 1994 of a brain tumor. In January 2009, the media reported on the publication of a book entitled Toy Monster: The Big, Bad World of Mattel by Jerry Oppenheimer.

In October 2009, Mattel announced a new Palm Beach line which included a "Sugar's Daddy Ken" doll aimed for adult collectors. The said line officially debuted in the spring of 2010. The line proved to be controversial, because of Ken's suggestive-sounding name. The doll had a more mature appearance and came with a West Highland Terrier puppy. Mattel defended the doll's name, saying that the puppy's name is "Sugar", thus making Ken "Sugar's Daddy". [12]

In 2021, Mattel announced 15 new looks for Ken. This included looks with different skin tones, body shapes and hair styles. Barbie underwent a similar makeover in 2020. Outside of this change, Ken hasn't changed much since he was introduced 56+ years ago. [13]

Ken's body proportions have been described as unrealistic by scholarly studies (his chest is estimated to be about 27.5% too large for a representative human male). [14] Unrealistic body proportions in Barbie dolls, including Ken's, have been connected to some eating disorders in children. [15] [16] Another controversy has also centered around the visibility (or lack of it) of Ken's male genitalia. [17]

Ken appeared in the 2010 Pixar film Toy Story 3 , voiced by Michael Keaton. He was one of the henchmen of the film's villain Lotso. [18]

In 2011, Mattel introduced Japan Ken, the first Ken doll to be included in the Dolls of the World collection, which was formerly a Barbie-only line. The Japan Ken doll features a new face sculpt. [19]

In Mattel's official Barbie: Life in the Dreamhouse web series, Ken's personality was greatly expounded on.

Ken's personal name is Kenneth Sean Carson. His given name comes from Elliot Handler's son. In the 1960s Random House books, his surname is Carson. According to Mattel, his middle name is Sean. 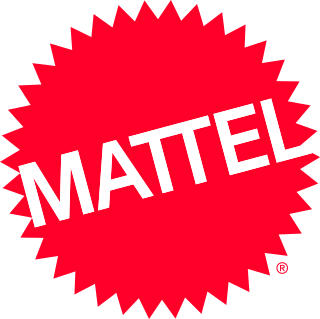 Mattel, Inc. is an American multinational toy manufacturing company founded in 1945 with headquarters in El Segundo, California. The products and brands it produces include Fisher-Price, Barbie, Monster High, Ever After High, Polly Pocket, Enchantimals, Hot Wheels, Matchbox, Masters of the Universe, American Girl, and Thomas & Friends. In the early 1980s, Mattel produced video game systems, under its own brands and under license from Nintendo. The company has presence in 40 countries and territories and sells products in more than 150 countries. The company operates through three business segments: North America, international, and American Girl. It is the world's second largest toy maker in terms of revenue, after The Lego Group. In 2019, it ranked #575 on the Fortune 500 list. On January 17, 2017, Mattel named former Google executive Margo Georgiadis as CEO. Georgiadis stepped down as CEO of Mattel on April 19, 2018. Her last day was on April 26, 2018. Ynon Kreiz is now the new CEO of Mattel.

Barbie is a fashion doll manufactured by the American toy company Mattel, Inc. and launched in March 1959. American businesswoman Ruth Handler is credited with the creation of the doll using a German doll called Bild Lilli as her inspiration.

Midge Hadley is a fictional doll character in the Barbie line of toys by Mattel that was first released in 1963. Midge was created at the same time as Skipper. She was marketed as Barbie's best friend. No Midge dolls were sold for the rest of the vintage years after the 1960s. Ruth Marianna Handler was an American businesswoman and inventor. She served as the president of the toy manufacturer Mattel Inc. In 1959, she invented the Barbie doll, which sold over a billion toys worldwide. She was the founder and president of the world's largest toy company, which at its peak had 18,000 employees and annual sales of over $300 million. In 1974, the Handlers were forced to resign from Mattel, and in 1978 Ruth Handler was convicted of false reporting to the Securities and Exchange Commission.

Bratz is an American product line of fashion dolls and merchandise manufactured by MGA Entertainment and created by Carter Bryant.

Skipper Roberts is a doll created by Mattel in 1964 to be Barbie's younger sister, as well as to oppose controversies directed at Barbie.

Chatty Cathy is a pull string "talking" doll originally created by Ruth and Elliot Handler and manufactured by the Mattel toy company from 1959 to 1965. The doll was first released in stores and appeared in television commercials beginning in 1960, with a suggested retail price of $18.00, but catalog advertisements usually priced the doll under $10.00. Chatty Cathy was on the market for six years and was the second most popular doll of the 1960s after Barbie. 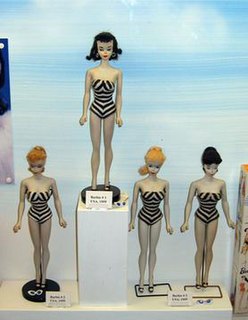 Fashion dolls are dolls primarily designed to be dressed to reflect fashion trends. They are manufactured both as toys for children to play with and as collectibles for adults. The dolls are usually modeled after teen girls or adult women, though child, male, and even some non-human variants exist. Contemporary fashion dolls are typically made of vinyl or another plastic, although 3D software versions exist. 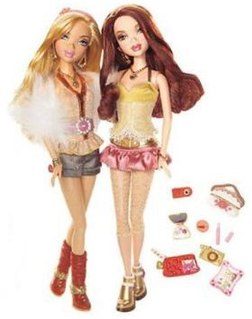 My Scene was an American series of fashion dolls created by Mattel in 2002. Mattel's Barbie character is one of the dolls in the My Scene line, and the My Scene dolls have slim bodies similar to earlier Barbie dolls, but with larger heads. The New York Times described their features as "exaggerated lips and bulging, makeup-caked eyes." My Scene were designed to appeal to the tween market and compete with the Bratz dolls from MGA Entertainment. The series originally consisted of three female characters, but was expanded to eventually include 10 different dolls.

The Bild Lilli doll was a German fashion doll launched on August 12, 1955 and produced until 1964. Its design was based on the comic-strip character Lilli, created by Reinhard Beuthien for the German tabloid newspaper Bild. The doll was made of polystyrene, came in two sizes, and had an available wardrobe of 1950s fashion. The Lilli doll was copied, and altered to some degree, for Mattel upon the direction of that company's co-founder, Ruth Handler. Mattel acquired the rights to Bild Lilli in 1964, and production of the German doll ceased, in favor of Mattel's new vinyl doll which they called Barbie.

Francie Fairchild is a fashion doll issued by Mattel from 1966 to 1976 and re-introduced in 2011. Marketed as "Barbie's MODern cousin" from England, the doll had an extensive line of "mod"-style clothing, often employing bright colors and geometric patterns similar to fashions associated with Carnaby Street in the late 1960s to early 1970s. At 11¼ inches tall, the Francie doll was shorter than Barbie, but taller than Skipper, making the character presumably between the two in age.

Jenny is a 10½ inch fashion doll produced by Japanese toy company now known as Takara Tomy since 1982. The doll was known as Takara Barbie, and in 1986 the doll was renamed "Jenny" after Takara ended their licensing agreement with Mattel.Takara Barbie differs from a western Barbie. Takara Barbie was altered to better appeal to Japanese preferences, with a shorter height, large rounded manga-style eyes and a closed mouth. Like her Western counterpart, Jenny wears a large variety of outfits, which often include street fashion, school uniforms, kimono, and other uniquely Japanese costumes, such as "Bullet-Train Stewardess Jenny". Today the Jenny doll is a sentimental favorite doll in Japan, but she is much less popular than Licca-chan, Japan's market leader fashion doll. Elliot Handler was an American inventor, businessman, and co-founder of Mattel. With his wife, he developed some of the biggest-selling toys in American history, including Barbie, Chatty Cathy, Creepy Crawlers, and Hot Wheels.

The Barbie Basics is a line of collector's edition Barbie dolls. They were created by Mattel designer Bill Greening and were introduced in late 2009 to be officially released in the spring of 2010.

The Barbie Fashion Model Collection is a line of dolls introduced in 2000. The collection features dolls aimed at the adult collector, and is primarily sold via the Barbiecollector.com website and online retailers. The dolls in the collection are all made from a material called Silkstone, a durable material that simulates the weight and feel of porcelain dolls.

Barbie: Life in the Dreamhouse is an online web series of computer-animated shorts produced by Arc Productions, and Mattel. The series debuted on May 11, 2012 and is available on Barbie.com, Netflix and YouTube. Two TV specials aired on Nickelodeon on September 1, 2013. The series ended on November 27, 2015. A new series titled Barbie Dreamhouse Adventures was released March 30, 2018.

Lammily is an American fashion doll developed by Nickolay Lamm in 2014. The doll was conceived as an "average" alternative to Mattel's Barbie line, which has received controversy over its body image and proportions. Lamm created the toy using proportions of the average 19-year-old woman as indicated by the Centers for Disease Control (CDC) (Petri). The name “Lammily” was formed by combining his last name and “family”.

The Marvelous World of Shani, also known as Shani & Friends or simply Shani, was a fashion doll line manufactured by the American toy company Mattel, Inc. and launched in 1991. The principal designer of the dolls was longtime Mattel toy designer Kitty Black Perkins, also responsible for designing 1980's First Black Barbie doll, and many other African American dolls in the Barbie line.