Kristian James Thomas (born 14 February 1989 in Wolverhampton) is a British former artistic gymnast. A long-standing member of both the England and Great Britain men's teams, he was a member of the British team that won gold in the 2012 European Championships team event, and a historic bronze in the same event at the 2012 Summer Olympics. He won his first global individual medal in the 2013 World Championships, a bronze in vault; it was also the first global medal ever won in vault by a British male gymnast. In 2015 he won his first major international title, gold in the floor exercise at the 2015 European Artistic Gymnastics Championships. 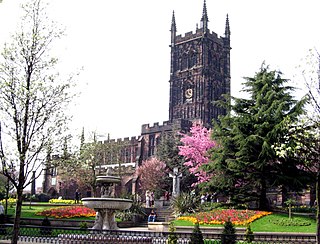 Wolverhampton is a city, administrative centre and metropolitan borough in the West Midlands, England. At the 2011 census, it had a population of 249,470. The demonym for people from the city is 'Wulfrunian.'

The 30th European Men's Artistic Gymnastics Championships was held from 23 to 27 May 2012 at Montpellier. The senior and junior events are different. During the senior's qualification the top eight teams progress to the team final, and the top eight gymnasts on each apparatus qualify for the individual finals. After the qualification for the juniors the team medals and places are awarded. Unlike the seniors in this event the top 24 gymnasts compete in the all around final.

Thomas was coached by Michelle Bradley and Alexei Popov, and is a member of the Earls gymnastics club. [2] He was born in Wolverhampton.

On 19 October 2017 Kristian announced his retirement from gymnastics.[ citation needed ]

In 2006, Thomas attended the Commonwealth Games in Melbourne, Australia, where he placed 12th and helped the English gymnastics team win the bronze medal. [3]

The 41st World Artistic Gymnastics Championships was held at The O2 Arena in London from 12 to 18 October 2009. Similar to the 2005 World Championships, there were no team competitions. Individual all-around and event finals were contested.

The 2010 World Artistic Gymnastics Championships was held at the Rotterdam Ahoy indoor sporting arena in the Netherlands from 16 to 24 October 2010. In this year's championships, there was a total of 73 participating federations with 615 gymnasts. 53 men's and 44 women's teams competed.

After the men's team initially failed to qualify to the 2012 Summer Olympics in London, Thomas gave a solid performance at the London Prepares FIG Olympic Test event. The men's team qualified more than 7 points ahead of the silver medal team, France, and Thomas placed 2nd in the All-Around behind teammate Daniel Purvis, as well as qualifying to several finals. [4] In the finals he won a Bronze on Floor, Bronze on Vault and Gold on High Bar. [5] [6]

Daniel Scott Purvis is a Scottish international elite artistic gymnast, and three-time British all-around champion in men's artistic gymnastics. He trains at Southport YMCA and is coached by Jeff Brookes and Andrei Popov. He was part of the first British men's team to win a medal at a World Championships in 2015.

At the London Olympics, Thomas was part of the bronze medal-winning GB men's team, competing on 30 July 2012 at the North Greenwich Arena . [7] In this team final, he vaulted with a massive score of 16.550.

In October, 2013, Thomas competed at the 2013 World Artistic Gymnastics Championships in Antwerp, Belgium. In the vault final, he won the bronze with the score of 15.233, behind Yang Hak-Seon and Steven Legendre. With the medal, he became the first gymnast (male or female) to win a vault medal for Great Britain.

On May 19-25 2014, at the 2014 European Championships in Sofia. Thomas along with his teammates (Daniel Keatings, Daniel Purvis, Max Whitlock, Sam Oldham) won Team Great Britain the silver medal behind Russia with a total score of 262.087 points. In event finals, Thomas won the bronze medal in high bar (14.808) behind teammate Sam Oldham. [8]

In July and August, at the 2014 Commonwealth Games held in Glasgow, Thomas contributed a score of 58.599 for the England team and won gold. He qualified for the vault final with a score of 15.100, and also finished in 8th in the Floor final. With a score of 15.033 he also qualified for the Horizontal bar final. He won a silver for vault with a score 14.499, coming behind Canadian gymnast Scott Morgan. Thomas scored 14.966 on Horizontal Bar, matching teammate Nile Wilson's score, but scoring lower on execution to win silver.

Marian Drăgulescu is a Romanian artistic gymnast. During his senior gymnastics career he has won an impressive 31 medals at Olympic games, and World or European Championships, of which eight are gold medals at the World Championships. He excels in vault and floor, on which he was a multiple world champion and Olympic medallist. His name will remain in gymnastics history not only because of his world titles on floor and vault, but also because of the extremely difficult vault that was named after him: a handspring double front somersault with ½ turn or the Drăgulescu. He was also an excellent all around gymnast, an event which he was a European champion (2004) and bronze medallist (2000), and placed 8th at the 2004 Olympic Games. 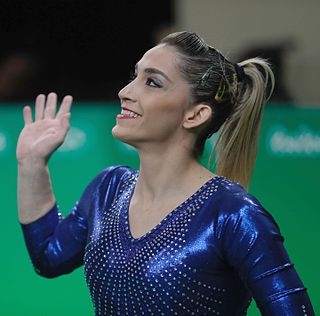 Daniele Matias Hypólito is a Brazilian gymnast who competed in the 2000, 2004, 2008, 2012 and 2016 Olympic Games. Hypólito was the first athlete from Brazil to ever win a medal at the World Championships, a silver on floor exercise in 2001. She is also the nine-time senior all-around Brazilian National Champion in artistic gymnastics, 2002 South American Games all-around champion and 2003 Pan American Games all-around bronze medalist. To date Hypólito has won the Brazilian National Championships more than ten times; has represented Brazil at the World Championships thirteen times, competing in every Worlds meet from 1999 to 2015, except in 2009; has taken part in every edition of the Olympic Games from 2000 to 2016; and has competed at five Pan American Games between 1999 and 2015.

Fabian Hambüchen is a retired German gymnast with a full set of Olympics medals, one in each colour, as he is the 2016 Olympic champion, 2012 Olympic silver medalist and 2008 Olympic bronze medalist on the individual horizontal bar event. 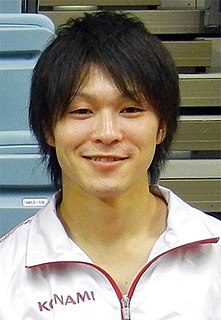 Kōhei Uchimura is a Japanese gymnast. He is a seven-time Olympic medalist, winning three golds and four silvers, and a twenty-one-time World medalist. Uchimura was already considered by many in artistic gymnastics to be the greatest gymnast of all time after his success at the 2012 Summer Olympics in London, but he subsequently solidified this position in the sport further by following up his performance in London with additional and uninterrupted wins at every major competition throughout the next Olympic cycle leading up to his individual all-around gold-medal victory at the 2016 Summer Olympics in Rio de Janeiro. He is known for being the first gymnast to win every major all-around title in an entire single Olympic cycle, accomplishing this feat twice by winning six world and two Olympic individual all-around titles. Uchimura is also the individual all-around silver medalist at the 2008 Summer Olympics in Beijing. He is known for delivering difficult and accurately executed routines. The International Gymnast Magazine had praised his skills as a "combination of tremendous difficulty, supreme consistency and extraordinary elegance of performance."

Ksenia Dmitrievna Afanasyeva is a retired Russian artistic gymnast who competed at the 2008 and 2012 Summer Olympics. She is the 2011 world champion on floor exercise, the 2013 and 2015 European floor champion, and the 2013 Universiade vault and floor champion. Widely regarded as one of the most original and artistic gymnasts of all time, she retired from elite gymnastics in July 2016 due to kidney disease, a month away from the 2016 Summer Olympics, for which she was the Russian team's first alternate. 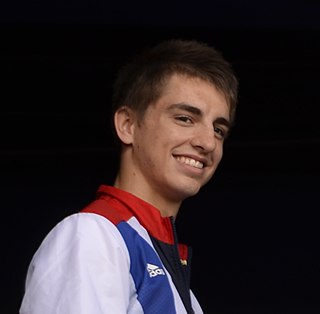 Max Antony Whitlock is a British artistic gymnast. He is a five-time Olympic medallist, winning two golds and three bronzes, and a six-time world medallist on the same apparatus with two gold and four silvers. He became Britain's first ever gold medallist in artistic gymnastics when he won both the men's floor and pommel horse exercises at the 2016 Summer Olympics. With twelve medals and four titles in Olympic and world championships, Whitlock is the most successful gymnast in his nation's history.

Steven Legendre is an American gymnast who competed for the University of Oklahoma Sooners men's gymnastic team from 2008 to 2011 and is a member of the U.S. National Team.

Arthur Nabarrete Zanetti is a Brazilian artistic gymnast. He won the gold medal in the rings exercise at the 2012 Summer Olympics in London and at the 2013 World Artistic Gymnastics Championships in Antwerp. 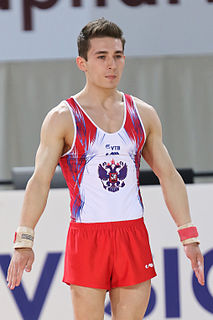 David Sagitovich Belyavskiy is a Russian artistic gymnast. He is a two-time Olympic medalist, winning a silver medal in the Team Final and a bronze medal on Parallel bars at the 2016 Summer Olympics in Rio de Janeiro, as well as the 2017 World Silver Medalist on Pommel Horse and 2017 World Bronze Medalist on Parallel Bars. He is also a five-time European Champion and 13-time European medalist, including being the 2013 European All Around champion, 2016 European Parallel Bars Champion, 2017 European Pommel Horse Champion and being part of the winning Russian Teams at the 2014 European Championships and the 2016 European Championships.

Giulia Steingruber is a Swiss artistic gymnast. She is the 2016 Olympic bronze medalist on vault and a European champion in all-around (2015), vault and floor (2016).

Ihor (Igor) Vitaliyovych Radivilov is a Ukrainian gymnast. Although he competes on all apparatuses, he is best known as a vault and rings specialist. 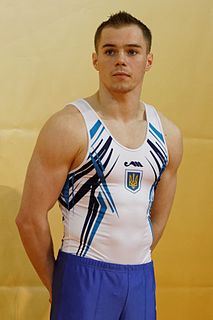 Maria Valeryevna Paseka is a Russian artistic gymnast and member of the Russia women's national gymnastics team. During her decade-long career, she has primarily been successful as a vault specialist. On this apparatus, she is a two-time Olympic medalist, a two-time world champion, a two-time European champion, the 2015 Universiade champion, and a two-time Russian national champion. As a member of the Russian teams at the 2012 and 2016 Summer Olympics, Paseka won two silver medals in the team competition. 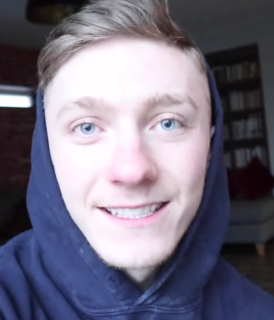 Nile Michael Wilson is a British artistic gymnast. He won an Olympic bronze medal in the men's horizontal bar at the 2016 Summer Olympics; he was a world medallist as a member of the silver-medal winning British team at the 2015 World Artistic Gymnastics Championships, the first world men's team medal in British gymnastics history.

Brinn John Bevan is a British artistic gymnast. He was part of the first men's team to win a team medal at a World Gymnastics Championships for Great Britain in Glasgow on 28 October 2015. He was part of the British team to compete in the Rio de Janeiro Olympics 2016.