Legacy Meridian Park Medical Center, formerly Legacy Meridian Park Hospital, is an acute care hospital in Tualatin, Oregon, United States. Opened in 1973, it is operated by Legacy Health. The facility is licensed for 150 beds, but operates only 128. Located in Clackamas County along the boundary with Washington County, it employs over 800 people and is Tualatin’s second largest employer.

Originally titled as Southwest Hospital while under proposal beginning in 1968, it was renamed as Meridian Park when it opened after the Willamette Meridian, which bisects the hospital grounds. [2] The medical facility was a joint venture between Emanuel Hospital (now Legacy Emanuel) and Physicians and Surgeons Hospital (now defunct), which formed Metropolitan Hospitals. [2] Groundbreaking occurred in 1971 and the hospital opened in 1973 when the city of Tualatin had a population of 750 at the 1970 Census [3] and prior to the construction of now neighboring Interstate 205. [2] The facility was built on 48 acres (190,000 m2) in a rural area at the edge of the Portland metropolitan area and employed 109 people when it opened. [2]

By 2002, the hospital was the ninth busiest in Oregon and served the cities of Tualatin, Tigard, Sherwood, Wilsonville, King City, and Lake Oswego among others. [2] At that time it employed almost 800 people and was the largest employer in the city of Tualatin. [2] A lab technician was arrested in 2003 on accusations of fondling patients. [8] In 2005, the emergency department was expanded with a separate area for children created. [9] The hospital purchased 20 acres (8.1 ha) of adjacent land in 2006 for $7 million to allow for future expansion of the campus. [10] Zoned for residential use that would also allow for hospital usage, the hospital requested a change in zoning in 2009 to ensure they could expand onto the site at a later date. [10]

Facilities at Legacy Meridian Park include a heart catheterization lab, breast health center, comprehensive stroke program, a 24-hour emergency room, cancer center, radiology services, a laboratory for sleep disorders, and an interventional cardiology department among others. [2] [11] Licensed for 150 hospital beds, Meridian Park had 138,331 total visits in 2007 with 28,018 patient days. [12] The emergency department has 25 beds [9] and served 31,548 people in 2007. [12] As of 2009, it was the city's largest employer with approximately 800 employees. [10] There were 1,061 births at the hospital in 2007. [12] The Meridian Park Hospital Heliport( FAA LID : 6OR5) is located on the grounds of the medical center. 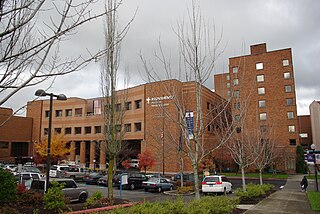 Tuality Community Hospital is a general care medical facility located in Hillsboro in the U.S. state of Oregon. The 167-bed facility was founded in 1918 in downtown, and is one of two hospitals in Hillsboro, Washington County’s most populous city. Tuality has partnerships with both Pacific University and Oregon Health & Science University. At six stories tall, the main building is tied for the tallest in the city with the Hillsboro Civic Center.

Legacy Emanuel Medical Center is a hospital located in the Eliot neighborhood of Portland, Oregon, United States. Founded in 1912, it is one of only two Level I trauma centers in the state of Oregon, and home to the only burn center between Seattle and Sacramento. The hospital is also home to the Life Flight Network (MEDEVAC), the first of its kind instituted on the U.S. West Coast. The 554-bed facility provides a full range of services, including conventional surgery, heart treatment, critical care, neurology/stroke care/brain surgery, care for high-risk pregnancies and others. Legacy Emanuel also houses the Randall Children's Hospital.

McKenzie-Willamette Medical Center is an acute care hospital located in Springfield, Oregon, United States. Opened in 1955, it serves the Lane County area. McKenzie-Willamette is investor-owned, and accredited by the Joint Commission. Licensed for 114 hospital beds, the facility was the only hospital in Springfield until the Sacred Heart facility at RiverBend opened in August 2008.

Oregon Health & Science University Hospital is a 522 bed teaching hospital, biomedical research facility, and Level I trauma center located on the campus of Oregon Health & Science University (OHSU) in Portland in the U.S. state of Oregon. OHSU hospital has consistently been ranked by the U.S. News & World Report as the #1 hospital in the Portland metro regional area and is frequently ranked nationally in multiple medical specialties.

Good Samaritan Regional Medical Center is a 188-bed medical facility located in Corvallis, Oregon, United States. The only hospital in the city, it is a level II trauma center, and serves the Linn, Benton, and Lincoln County area.

Providence Newberg Medical Center is a not-for-profit Level IV acute care hospital in Newberg, Oregon, United States. Opened at a different location as Newberg Community Hospital, a new 40-licensed-hospital-bed and Leadership in Energy and Environmental Design (LEED)-certified facility was opened in 2006, the first gold certified hospital in the nation. The three building medical center is located on 56 acres (23 ha) on the eastern edge of the city along Oregon Route 99W and is owned by Providence Health & Services.

Legacy Health is a non-profit hospital system located in Portland, Oregon, United States. It consists of six primary-care hospitals, a children's hospital and allied clinics and outpatient facilities. The system employs about 14,000 staff members, and is the second-largest system in the Portland metro area, after the Providence Health System. 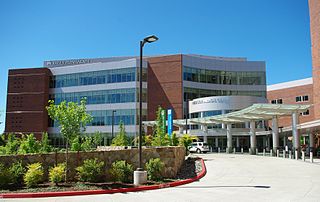 Kaiser Westside Medical Center is a hospital in the Tanasbourne neighborhood in Hillsboro in the U.S. state of Oregon. Opened in August 2013 with 126 hospital beds, the Kaiser Permanente facility is planned to later expand to 174 beds. It was designed by Ellerbe Becket Architects and Petersen Kolberg & Associates Architects/Planners. The $220 million hospital includes Kaiser’s Sunset Medical Office that opened in 1987 on the west side of the Portland metropolitan area.

Kaiser Sunnyside Medical Center is a not-for-profit, general care hospital in the Sunnyside area of Clackamas County in the U.S. state of Oregon. Opened in 1975, the Kaiser Permanente owned facility is licensed for 233 hospital beds. Located in the Portland metropolitan area along Interstate 205 on the eastside, after Bess Kaiser Hospital in north Portland closed, it was Kaiser's only hospital in the Portland area until Westside Medical Center opened in 2013. The hospital includes Clackamas County's only heart surgery facility.

Providence Milwaukie Hospital is a 77-bed acute care hospital in Milwaukie, Oregon, US. Located in the Portland metropolitan area, it is owned by Providence Health & Services. Opened in 1968, it was originally Dwyer Memorial Hospital, a private hospital, before becoming a community hospital a few years after opening. 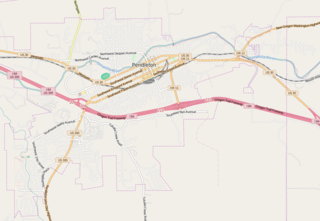 St. Anthony Hospital is an acute care hospital in Pendleton in the U.S. state of Oregon. The 25-bed facility, licensed for 49 beds, is a level 4 trauma center. Opened in 1902, it is part of the Catholic Health Initiatives and is accredited by the Joint Commission. The new campus sits along U.S. Route 395 on the south side of the city.

St. Charles Madras is a non-profit medical center located in Madras, Oregon, United States. Founded in 1967 as Mountain View Hospital, the level IV trauma center has 25 beds. It is the only hospital in Jefferson County and joined the St. Charles Health System in 2013.

Legacy Holladay Park Medical Center is a hospital located in Portland, Oregon, United States. It was founded in 1893 as Hahnemann Hospital. By 1947 the hospital had 100 beds, and that year it changed its name to Holladay Park Hospital with plans to expand to 200 beds. With a 1985 merger with Physicians & Surgeons Hospital, the name was changed to Holladay Park Medical Center. At that time both hospitals were part of Metropolitan Hospitals, Inc. that had been formed by Physicians & Surgeons Hospital and Emanuel Hospital. After becoming part of Legacy Health when it was formed in 1989, Legacy closed the then 171-bed hospital in 1994. As of 2014, the former hospital was used by Legacy as the Legacy Research Institute. Legacy proposed converting the building into an emergency room for psychiatric patients in 2014 after the Legacy Research Institute moved to a new building. Legacy, Oregon Health & Science University, Adventist Health, and Kaiser Permanente agreed to operate the ER, with a planned opening in 2016. 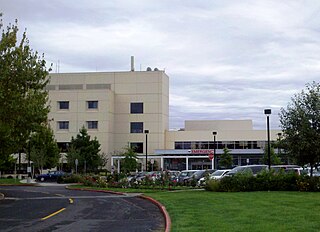 Legacy Mount Hood Medical Center is a hospital in Gresham in the U.S. state of Oregon. Established in 1959, the 115-bed facility in the Portland metropolitan area is owned by the nonprofit Legacy Health. Originally a for-profit hospital, it moved to its current campus in 1984.

Santiam Hospital is a hospital in Stayton in the U.S. state of Oregon. Established in 1953, the 40-bed facility serves eastern Marion County and the suburbs of Salem. 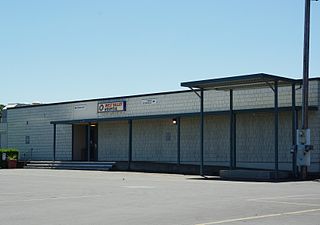 West Valley Hospital (WVH) is a 6-bed medical facility in Dallas, Oregon. Opened in 1907 as Dallas Hospital, it is operated by Salem Health, which also operates Salem Hospital. WVH is the only hospital in Polk County.