Jacob "Baby Jake" Matlala was a South African boxer and junior flyweight champion from Meadowlands, Johannesburg. In 2004, Matlala was voted #72 in the "100 Greatest South Africans" poll organized by SABC.

Michael Jennings is a British former professional boxer who competed from 1999 to 2010. He challenged once for the vacant WBO welterweight title in 2009. At regional level, he held the British welterweight title from 2005 to 2006. He has 2 sons, Mikey and Jack, and a daughter, Macy.

Super Cruiserweight is a weight class in combat sports.

Choijiljavyn "Choi" Tseveenpürev is a Mongolian featherweight boxer based in the United Kingdom. Tseveenpurev won the Prizefighter series Featherweights tournament on 29 October 2011, the same month that he passed 40. This followed a ten-round victory on 18 June 2011 over former IBO featherweight champion Jackson Asiku – a fight nominated for the British boxing fight of the year.

Lee “Aberdeen Assassin” McAllister is a Scottish professional boxer nicknamed the "Aberdeen Assassin". McAllister held the Commonwealth lightweight and light-welterweight titles, the IBO International light-welterweight title, and challenged once each for the European and British titles. He captured the junior-middleweight WBU World Championship on October 5, 2019 against Richmond Djarbeng by 2nd round TKO. Lee is also a very successful promoter; Assassins Promotions boxing, which holds events in his hometown of Aberdeen, where he also runs and operates a very prestigious boxing gym called Assassin's Health & Fitness. On July 22, 2018 he fought his most high profile fight whenever he moved up 5 weight classes and challenged British WBU #1 contender Danny Williams, who beat Mike Tyson, in eerily similar fashion; McAllister dominated Williams and KO'd him in round 10 to become the WBU Heavyweight champion of the world.

Hamid Rahimi is a boxer from Afghanistan. He is an ethnic Hazara who lives in Germany. In February 2012, he won the New World Boxing Union (WBU) Championship by defeating his Belarusian rival in Hamburg. 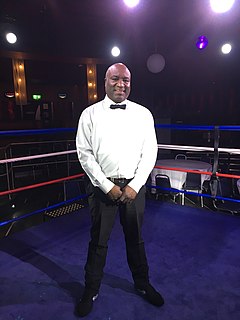 Johnny Armour is an English amateur flyweight and professional super fly/bantam/super bantam/featherweight boxer of the 1990s and 2000s.