The following is a list of WBC female world champions certificated by the World Boxing Council (WBC).

On October 13, 2012, Ava Knight won the Diamond Belt at Flyweight, decisioning Mariana Juárez. On May 11, 2013, she defended this title against Linda Soto from Mexico by unanimous decision.

Santos Benigno Laciar, known familiarly as Santos Laciar and nicknamed Falucho, is an Argentine who was boxing's world flyweight and super flyweight champion.

Carlos Zárate Serna is a retired Mexican boxer. He and fellow Mexican and world Bantamweight champion Rubén Olivares have the distinction of being the only two professional boxers in history to put together two streaks of 20 or more knockout wins in a row.

Hilario Zapata is a Panamanian former professional boxer. He held the WBC light flyweight and WBA flyweight titles, and challenged once for the WBC super flyweight title. 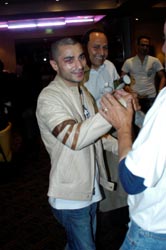 Vakhtang "Vic" Darchinyan is an Armenian professional boxer. He is a former world champion in two weight classes, having held the IBF flyweight title from 2004 to 2007; and the WBA (Undisputed) and WBA (Unified), WBC, IBF, and lineal super-flyweight titles between 2008 and 2010. Additionally, he has held a record four IBO titles at flyweight, super-flyweight, and twice at bantamweight between 2005 and 2011. A southpaw boxer with a highly unique fighting style and formidable punching power, Darchinyan became the first Armenian to win a world title in 2004. 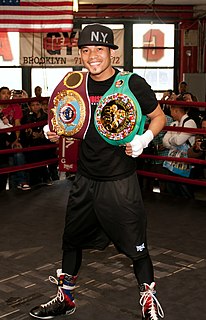 Lee Seung-hoon is a former boxer from South Korea.

Takuma Inoue is a Japanese professional boxer. He held the WBC interim bantamweight title from 2018 to 2019, and challenged for the full world title in 2019.

Rey Geovani Vargas Roldán is a Mexican professional boxer who has held the WBC super bantamweight title from 2017 to 2020.

Naoko Fujioka is a Japanese professional boxer. She is Japan's first ever five-division world champion, having held the WBA female flyweight title since 2018 and previously the WBC female minimumweight; WBO female junior-flyweight; WBA female super-flyweight; and WBO female bantamweight titles between 2012 and 2017. As of September 2020, she is ranked as the world's best active female flyweight by The Ring and BoxRec.