The Illinois Country was governed by military commandants for its entire period under French and British rule, and during its time as a county of Virginia. The presence of French military interests in the Illinois Country began in 1682 when Robert de La Salle built Fort St. Louis du Roche on the Illinois River. The commandant of the fort was the top French official in the region and was responsible to the Governor General of New France. In 1718 Illinois was transferred to Louisiana and renamed Upper Louisiana. The new seat of government was Fort de Chartres, located in what is now southeastern Illinois among the growing French settlements of Cahokia, Kaskaskia and Prairie du Rocher.

In 1763, at the conclusion of the French and Indian War, the entire area of Louisiana was divided, with Great Britain receiving the lands east of the Mississippi and Spain claiming the lands west of it. The new city of St. Louis, in present-day Missouri, became the seat of government of Spanish Upper Louisiana. The government of the British side, present-day Illinois, remained in the hands of military commandants at Fort de Chartres; upon that fort's abandonment the seat of government moved to Kaskaskia. British rule in Illinois was ad hoc and unsystematic. The Quebec Act of 1774 would have organized a government for the region, but before it could be put into effect Illinois was captured by Virginia militia in the Illinois Campaign. [1]

This period included the entire Mississippi River and Missouri River basin above the mouth of the Arkansas River.

East of the Mississippi

After the Seven Years' War ended in 1763, the Treaty of Paris awarded Great Britain the east bank of the Mississippi, from below Baton Rouge northwards. Due to the outbreak of Pontiac's War, British forces were unable to take control of the Illinois forts until 1765. [2]

Virginia militia under George Rogers Clark captured Illinois in the Illinois Campaign of 1778. The territory was organized as Illinois County, Virginia and placed under a military government, which was intended to be temporary. This government came to an end in 1784, when Virginia ceded the Illinois Country to the United States government. It became part of the Northwest Territory in 1787. [3]

West of the Mississippi

After 1765, when Western Louisiana was ceded to Spain by France, the capital of Upper Louisiana was Saint Louis, Missouri. In spite of that, the governors of Saint Louis maintained the name of "commandants of Illinois". In this new period, Upper Louisiana referred only to the land west of the Mississippi River and above the mouth of the Arkansas River.

In 1803, France under Napoleon purchased Louisiana from Spain. France never established its rule in Upper Louisiana, and already in 1803 it sold the entire territory to the United States as the Louisiana Purchase. Jurisdiction was above the 33rd parallel on the west side of the Mississippi River. Nominal French control at St. Louis lasted only a single day, known as Three Flags Day, when sovereignty was symbolically transferred from Spain to France to the United States. American military rule continued for a few months. On October 1, 1804, civilian government began under the Governor of Indiana Territory. Upper Louisiana was reorganized as the Louisiana Territory in 1805 and the Missouri Territory in 1812.

Commandant of the District of Louisiana 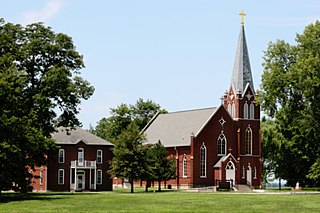 Kaskaskia is a village in Randolph County, Illinois. Having been inhabited by indigenous peoples, it was settled by France as part of the Illinois Country. It was named for the Kaskaskia people. Its population peaked at about 7,000 in the 18th century, when it was a regional center. During the American Revolutionary War, the town, which by then had become an administrative center for the British Province of Quebec, was taken by the Virginia militia during the Illinois campaign. It was designated as the county seat of Illinois County, Virginia, after which it became part of the Northwest Territory in 1787. Kaskaskia was later named as the capital of the United States' Illinois Territory, created on February 3, 1809. In 1818, when Illinois became the 21st U.S. state, the town briefly served as the state's first capital until 1819, when the capital was moved to more centrally located Vandalia. 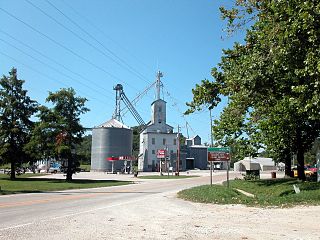 Prairie du Rocher is a village in Randolph County, Illinois, United States. Founded in the French colonial period in the American Midwest, the community is located near bluffs that flank the east side of the Mississippi River along the floodplain often called the "American Bottom". The population was 502 at the 2020 census. 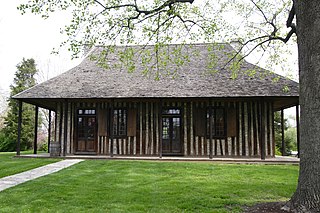 Cahokia was a village in St. Clair County, Illinois, United States. It was located east of the Mississippi River in the Greater St. Louis metropolitan area. As of the 2010 census, 15,241 people lived in the village, a decline from 16,391 in 2000. On May 6, 2021, the village ceased to exist, being incorporated into the new city of Cahokia Heights. 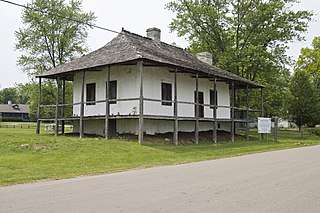 Ste. Genevieve is a city in Ste. Genevieve Township and is the county seat of Ste. Genevieve County, Missouri, United States. The population was 4,999 at the 2020 census. Founded in 1735 by French Canadian colonists and settlers from east of the river, it was the first organized European settlement west of the Mississippi River in present-day Missouri. Today, it is home to Ste. Genevieve National Historical Park, the 422nd unit of the National Park Service. 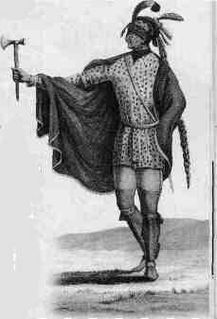 The Illinois Country —sometimes referred to as Upper Louisiana —was a vast region of New France claimed in the 1600s in what is now the Midwestern United States. While these names generally referred to the entire Upper Mississippi River watershed, French colonial settlement was concentrated along the Mississippi and Illinois Rivers in what is now the U.S. states of Illinois and Missouri, with outposts in Indiana. Explored in 1673 from Green Bay to the Arkansas River by the Canadien expedition of Louis Jolliet and Jacques Marquette, the area was claimed by France. It was settled primarily from the Pays d'en Haut in the context of the fur trade, and in the establishment of missions by French Catholic religious orders. Over time, the fur trade took some French to the far reaches of the Rocky Mountains, especially along the branches of the broad Missouri River valley. The French name, Pays des Ilinois, means "Land of the Illinois [plural]" and is a reference to the Illinois Confederation, a group of related Algonquian native peoples. 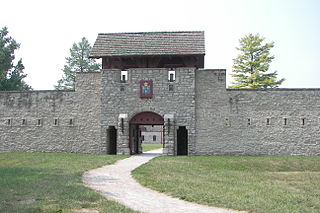 Fort de Chartres was a French fortification first built in 1720 on the east bank of the Mississippi River in present-day Illinois. It was used as the administrative center for the province, which was part of New France. Due generally to river floods, the fort was rebuilt twice, the last time in limestone in the 1750s in the era of French colonial control over Louisiana and the Illinois Country.

Louisiana or French Louisiana was an administrative district of New France. Under French control from 1682 to 1769 and 1801 (nominally) to 1803, the area was named in honor of King Louis XIV, by French explorer René-Robert Cavelier, Sieur de la Salle. It originally covered an expansive territory that included most of the drainage basin of the Mississippi River and stretched from the Great Lakes to the Gulf of Mexico and from the Appalachian Mountains to the Rocky Mountains.

"Indian Reserve" is a historical term for the largely uncolonized land in North America that was claimed by France, ceded to Great Britain through the Treaty of Paris (1763) at the end of the Seven Years' War—also known as the French and Indian War—and set aside for the First Nations in the Royal Proclamation of 1763. The British government had contemplated establishing an Indian barrier state in the portion of the reserve west of the Appalachian Mountains, and bounded by the Ohio and Mississippi rivers and the Great Lakes. British officials aspired to establish such a state even after the region was assigned to the United States in the Treaty of Paris (1783) ending the American Revolutionary War, but abandoned their efforts in 1814 after losing military control of the region during the War of 1812.

Philippe François Renault was a French politician, businessman, explorer, metallurgist, and favorite courtier of King Louis XV of France, who left his native Picardy in 1719 for the Illinois Country, Upper Louisiana, in French North America.

St. Philippe is a former village in Monroe County, Illinois, United States. The settlement was founded in ca. 1723 by Frenchman, Philip Francois Renault, during the French colonial period. St. Philippe was strategically located near the bluffs that flank the east side of the Mississippi River in the vast Illinois floodplain known as the "American Bottom". The village was located three miles north of Fort de Chartres. Because of many decades of severe seasonal flooding, St. Philippe and the fort were both abandoned before 1765. After the British takeover of this area following their victory in the Seven Years War, many French from the Illinois country moved west to Ste. Genevieve, Saint Louis, and Missouri

The history of St. Louis, Missouri, from prehistory to 1762 was marked by the presence of the Moundbuilder indigenous culture, the explorations of Europeans, and the establishment of French trading posts along the Mississippi River.

Pierre-Charles de Liette was an Italian who moved to French North America and enrolled there as a French soldier. He served as an aide to Henri de Tonti, as commandant at Fort Saint-Louis and Chécagou, and as a captain in the colonial regular troops from 1687 to 1729. He was also Commandant of the Illinois Country from 1702 to 1718. 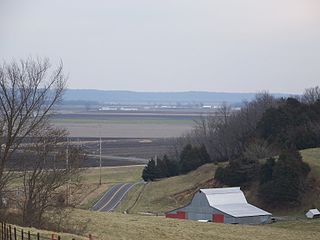 The Bois Brule Bottom is an alluvial floodplain in Bois Brule Township in Perry County, Missouri stretching between Bois Brule Creek to the west and the Mississippi River to the east.

Pedro Joseph Piernas was a Spanish military official who rose to the rank of commandant in 1768 and served as Lieutenant governor of Illinois between 1770 and 1775. 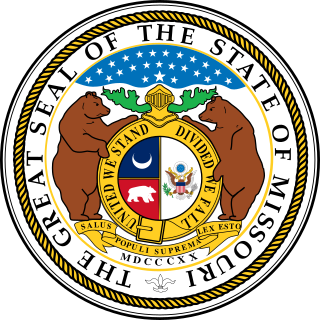 The Colonial history of Missouri covers the French and Spanish exploration and colonization: 1673–1803, and ends with the American takeover through the Louisiana Purchase

Robert Groston de Saint-Ange was a French military officer and commandant in the Illinois Country of New France.