Victoria Lorna Perez Aluquin-Fernandez, better known by her stage name Lorna Tolentino, sometimes known as L.T., an abbreviation of her screen name (born December 23, 1961), is a Filipina actress, host, executive producer and widow of actor Rudy Fernandez. Together, they had two sons named Ralph and Renz. As a child star, she used the screen name, Giselle in the movie of the same title with Chiquito playing her adoptive father. As an adult actress, Seven Stars productions re-launched her in Miss Dulce Amor, Ina (popular novel in Liwayway Magazine) in 1978.

She was born on December 23, 1961, in Concepcion, Tarlac and later moved to Manila. Her dad is from Liliw, Laguna. She is also the stepmother of actor Mark Anthony Fernandez. She is first cousin to actress Amy Perez, Zsa Zsa Padilla and a niece of actor Jerry Pons. She was married to actor Rudy Fernandez from 1983 till his death in 2008. They have two children.

She attended the elementary grades at St. Anthony School where she also finished high school. She took up a Bachelor of Arts course at St. Paul College in Quezon City, and also at the University of Santo Tomas and Maryknoll College (now Miriam College).

She started her career as a child actress. Later, she portrayed the young Susan Roces in Divina Gracia [1] and has a total of at least 60 movies. She has won eight film awards and garnered 20 nominations (mostly for Best Actress in FAMAS).

She is also one of the Grandslam actresses in Philippine Cinema together with Vilma Santos, Elizabeth Oropesa, Nora Aunor and Sharon Cuneta. She won her Grandslam Best Actress for Narito Ang Puso Ko (1993). She went back to her original network, GMA Network, to star in the upcoming heavy drama series Pahiram ng Sandali .

Tolentino is also known for her heavy dramatic portrayals in Primetime Award Winning TV dramas. In 2002-2003, she was cast in the suspense drama series Kay Tagal Kang Hinintay as Lorrea/Lorrinda Guinto/Red Butterfly, a lead role which successfully set Philippine Primetime TV Standards and a successful finale.

In 2009-2010, Tolentino stopped doing TV series and instead focused on full-length films. On occasions, she participated as a TV host. She came back to reclaim her throne when she played the role of Atty. Tessa Ramirez in the popular soap opera Dahil May Isang Ikaw which won her more accolades in the New York Television Awards for Best Telenovela.

In 2011, she did the Action-Military Drama Minsan Lang Kita Iibigin where she played a villain as Alondra Sebastiano. She left the network and did a heavy Primetime Drama Glamorosa .

In 2012, Tolentino did the soap opera Pahiram ng Sandali with GMA-7 with actor Dingdong Dantes, Christopher de Leon and Max Collins. She was included in the cast of Valiente and the weekly series Third Eye both airing on TV 5.

In 2014, Tolentino had a small part in the GMA Network series, Genesis again with Dingdong Dantes.

In 2015, she started to with Ruffa Gutierrez and Gelli de Belen in Misterless Misis on TV 5.

In 2018, Tolentino came back to ABS-CBN after five years to do the daytime series Asintado .

As producer or executive producer 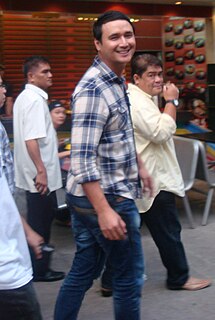 John Anthony S. Estrada is a Filipino film and TV actor who has starred in a number of roles as a leading man, comedian and villain. He is a contract actor of ABS-CBN, where he remained there from 1990 to 2018 and returned on 2021, after which he transferred to GMA Network from 2018 to 2021. He also did a sitcom on TV5 called Everybody Hapi.

Maja Ross Andres Salvador is a Filipino actress, dancer, singer, host, producer, and talent manager. She is currently self-managed by her own talent agency, Crown Artist Management. Prior to the sudden shutdown of ABS-CBN, she was under the management of ABS-CBN's Star Magic. In 2011, Salvador co-produced and portrayed the title role in the film Thelma, which earned her the Gawad Urian Award and the Film Academy of the Philippines Award for Best Actress.

Maria Cecilia "Maricel" dela Cueva Laxa-Pangilinan is a Filipino actress. She won Best Supporting Actress awards in the 1992 FAMAS Awards and Star Awards for her role in the 1992 film Iisa Pa Lamang.

Geraldine Schaer Bonnevie-Savellano, known by her stage name Dina Bonnevie (Tagalog pronunciation: [ˈbɔnɛvi], is an actress in the Philippines. Before joining Philippine showbiz, Bonnevie was first-runner in the Miss Magnolia 1979 Beauty Contest. She landed her first acting assignment in the campy Temptation Island in 1980 with Joey Gosiengfiao at the helm. However, the following year, Regal Films launched her to lead star status via Joey Gosingfiao's Katorse opposite then boyfriend, Alfie Anido. The same film introduced a young Gabby Concepcion who essayed the role of a naughty brat of a man.

Amy Austria-Ventura is a Filipino actress. 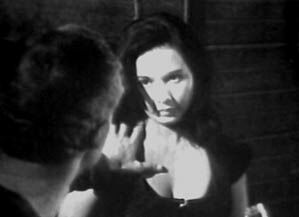 Rosario Violeta Solís Hernández, better known as Charito Solís, was a FAMAS and Gawad Urian Award-winning Filipina film actress, in addition to being the first Philippine woman who have bared her chest in recorded film.

Richard Frank Icasiano Gomez is a Filipino athlete, television presenter, actor, director and politician. He graduated from the University of the Philippines Open University and the University of Perpetual Help System DALTA. He earned a doctorate in public administration from the Cebu Technological University in 2019.

Gloria Romero is a Filipina actress appearing in film and television. Her career spans 60 years and includes award-winning performances in the films Tanging Yaman, Nagbabagang Luha and 1955's Dalagang Ilocana. She is the first recipient of the lifetime achievement award from the Movie and Television Review and Classification Board (MTRCB).

Enrico Smith Quizon is a Filipino actor, director, producer, writer, and comedian. He is the 12th child of the "King of Comedy" Dolphy. He is a co-owner of Café Famous in Greenbelt, Makati. He is known for his character Francis, the main antagonist in My Dear Heart.

Narito ang Puso Ko is a 1992 Filipino drama film directed by Chito S. Roño and starring Lorna Tolentino and Gabby Concepcion. Produced by Viva Films, the film was released on September 30, 1992, and was a box office success. Tolentino's performance won her the title of Grandslam Best Actress, having won all nominations for best actress across the major award giving bodies of the Philippines.

Jennifer Sevilla-Go is an actress in movies and television shows in the Philippines. She was a former member of That's Entertainment.

Barbara Perez is a Filipina actress in movies and television in the Philippines. She was tagged as the "Audrey Hepburn of the Philippines" due to her doe eyes, pixie face, swan-like neck and 19-inch waistline. In the west she appeared in No Man Is an Island, a 1962 Hollywood movie starring Jeffrey Hunter.

Marilou Yap Gumabao, professionally known as Isabel Rivas is a Filipina actress and businesswoman. She is the younger sister of former actor Dennis Roldan.

Eva Darren is a Filipino actress.

The PMPC Star Award for Best Drama Series is given to the best television dramas of the year.