Manchester Thunder are an English netball team based in Manchester. Their senior team plays in the Netball Superleague. In 2005–06, Thunder were founding members of the league. They were Superleague champions in 2012, 2014, 2019 and 2022. Between 2001 and 2012 they played as Northern Thunder and were originally based in Bury, Greater Manchester.

In the 2022 season Manchester Thunder finished the regular season undefeated, becoming the first team to do so over 20 games. They defeated Team Bath in the semi-finals and then beat Loughborough Lightning in the final to claim their 4th Superleague title.

Since 2012 Manchester Thunder have hosted the Manchester Invitational Tournament. The winners are awarded the Mike Greenwood Trophy, named in honour of the former Northern Thunder head coach who died in 2011. It is usually played during pre-season. [20] [21] [22]

Tracey Anne Neville is a former England netball international and a former England head coach. As a player, she was a member of the England teams that won bronze medals at the 1998 Commonwealth Games and the 1999 World Netball Championships. As a head coach she guided Northern Thunder/Manchester Thunder to Netball Superleague titles in 2012 and 2014. Between 2015 and 2019 she served as England head coach. She subsequently guided England to the gold medal at the 2018 Commonwealth Games and to bronze medals at the 2015 and 2019 Netball World Cups. In 2016 she was awarded an. Neville is the twin sister of Phil, younger sister of Gary and daughter of Neville Neville.

The Netball Super League is a top level netball league featuring teams from the United Kingdom. The league is organised by England Netball but features teams based in England, Wales and Scotland. The league was commenced playing at the 2005–06 season, replacing the Super Cup as the elite netball competition in England. Since 2016 the league has been sponsored by VitalityHealth and, as a result, it is also known as the Vitality Netball Superleague.

Janelle Lawson is an Australian netball player. In 2012 she was a member of the Northern Thunder team that won the Netball Superleague title. During the Commonwealth Bank Trophy era she played for Perth Orioles and AIS Canberra Darters. During the ANZ Championship era she played for Queensland Firebirds and West Coast Fever.

Yorkshire Jets were an English netball team based at Leeds Beckett University. Their senior team played in the Netball Superleague. Between 2005–06 and 2011 they played as Leeds Met Carnegie or simply Leeds Carnegie. Together with the men's basketball, women's basketball, men's association football, women's association football and rugby union teams, the netball team was one of several sports teams associated with the Carnegie School of Physical Education, now part of Leeds Beckett University, that used the Leeds Carnegie brand name. In 2005–06, Leeds Carnegie were founder members of the Netball Superleague. As Leeds Carnegie, their best Superleague performance came in 2008–09, when they finished fourth. Between 2012 and 2016 they played as Yorkshire Jets. Their best Superleague performance as Yorkshire Jets came in 2015 when they again finished fourth. In June 2016 England Netball announced that Jets had lost their place in the Superleague and the franchise was subsequently wound up.

The 2015 Netball Superleague season was the tenth season of the Netball Superleague. The league was won by Surrey Storm after defeating Hertfordshire Mavericks in the grand final. Manchester Thunder finished top of the table following the regular season but they subsequently lost to Mavericks in the semi-finals. Thunder eventually finished third overall. Yorkshire Jets were the surprise team of the season, finishing third during the regular season and fourth overall. This was the first season in Superleague history that Team Bath did not qualify for the semi-finals.

The 2016 Surrey Storm season saw them retain the Netball Superleague title after defeating Manchester Thunder in the grand final. During the regular season they finish second behind Thunder.

The 2016 Netball Superleague Grand Final featured Surrey Storm and Manchester Thunder. Having previously played each other in 2012 and 2014, this was the third grand final featuring both teams. Thunder had won both the previous encounters. This was also Surrey Storm's third consecutive grand final, having lost to Thunder in 2014, they defeated Hertfordshire Mavericks in 2015.

Wasps Netball were an English netball team based at the Coventry Building Society Arena in Coventry, Warwickshire. Wasps Netball was formed in 2016 as a partnership with the Premiership Rugby team, Wasps RFC. Since 2017 their senior team has played in the Netball Superleague. They were Superleague champions in 2017 and 2018. The holding company for the team were placed in insolvency on 17 October 2022 and a new company called "Wasps Netball Limited" was incorporated with Companies House on 26 October 2022.

The 2014 Netball Superleague season was the ninth season of the Netball Superleague. The league was won by Manchester Thunder. Surrey Storm finished top of the table following the regular season and remained unbeaten throughout the season until they were defeated in the grand final by Manchester Thunder. This season the league was sponsored by Zeo, a soft drinks firm.

The 2014 Netball Superleague Grand Final featured Manchester Thunder and Surrey Storm. This was the second grand final featuring Thunder and Storm. The two teams previously met in the 2012 grand final which Thunder won by two points. After winning the regular season without losing a match, Storm, with a team featuring player/coach Tamsin Greenway and Rachel Dunn, started the final as favourites. At half-time they were leading 26–22 and after three quarters were still ahead at 38–36. However Thunder, coached by Tracey Neville and featuring Sara Bayman, remained a threat throughout the match. With the score at 48–48 and twenty five seconds on the clock, pressure from Jodie Gibson saw Storm lose possession. Thunder pounced on a loose ball and fed it to Helen Housby who subsequently netted a very late winner. 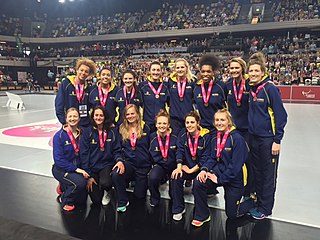 The 2016 Team Bath netball season saw Team Bath finish third overall in the 2016 Netball Superleague. In the third-place play-off they defeated Hertfordshire Mavericks 49–48 to finish the season as bronze medallists. During the regular season they finished fourth, level on points with Surrey Storm and Hertfordshire Mavericks in second and third place respectively. Manchester Thunder topped the table. Team Bath lost 53–46 at Manchester Thunder in the play-off semi-finals.

Dan Ryan is an Australian netball player, coach, sports journalist and broadcaster. He is currently the head coach of the West Coast Fever in the Australian Suncorp Super Netball competition.