The Meenachil River, also known as Kavanar, Gauna, Valanjar originates at vagamon in the Western Ghats of Kerala, flows westward through Erattupetta, Palai, Kidangoor, Ettumanoor and Kottayam. Its length is about 87 kilometers. Near Kottayam it splits into a number of distributaries before emptying into the Vembanad Lake. Kumarakom, the bird sanctuary and tourist resort is on one such branch.[ citation needed ]

The current Meenachil taluk was a principality under the local chieftains, the Meenachil Karthas (also known as Njavakkat Karthas) before Marthanda Varma annexed it to Travancore in 1754. The name of the place comes from Goddess Meenakshi, the deity of the Karthas. Veera Kerala Damodara Simhar was a chieftain belonging to this family. [1] The southern bank of the river was the kingdom of Thekkumkoor, the capital of which was Changanassery, and the northern bank, that of Vadakkumkoor, with its capital at Kaduthuruthy. The Poonjar royal family also held sway over significant areas of the district towards the east.

Though food crops like paddy and tapioca are cultivated, majority of the population depends on cash crops like rubber and black pepper for income. Turmeric,ginger,cardamom,aracanut, coconut, nutmeg,clove,karuva pattai, jackfruit, tamarind where cultivated here.Recently people had diversified into the cultivation of vanilla on account of the sudden spurt in prices. However, with rubber prices ruling high and vanilla prices nosediving, the original agricultural pattern is seen reemerging. Though there are families with considerable wealth, a large section of the population are farmers with small and medium agricultural holdings.[ citation needed ]

The Kerala Government has recently (2006) accorded high priority to the implementation of the Meenachil River Valley Project. The project aims at diverting excess water from the Moovattupuzha river into the Meenachil River basin by constructing a tunnel from Arakkulam to Melukavu. Once implemented the project will help in increasing the availability of water in the area.[ citation needed ]

Traditionally, the region is the hotbed of various factions of the Kerala Congress. However mainstream parties like the Indian National Congress, Communist Party of India (Marxist), Communist Party of India, NCP (Nationalist Congress Party) Bharatiya Janata Party also have significant following. The prices of rubber and other agricultural prices determine the agenda of many elections. It is alleged that the church influences the political agenda significantly.

Meenachil Taluk does not have rail connectivity. The nearest major railway stations are Kottayam, 28 km and Ernakulam junction, 64 km from palai. The nearest airport is the Cochin International Airport at Nedumbassery, 85 km from Palai.

Kottayam, is one of 14 districts in the Indian state of Kerala. Kottayam district comprises six municipal towns: Kottayam, Changanassery, Pala, Erattupetta, Ettumanoor, and Vaikom. It is the only district in Kerala that neither borders the Arabian Sea nor any other states.

Bharananganam, an important pilgrimage centre in South India, is located on the banks of the Meenachil River, four kilometres (2.5 mi) away from Pala and four kilometres (2.5 mi) from Plassanal, in Kottayam district in the state of Kerala. Bharananganam and surrounding places are hilly areas with a lot of vegetation. Agriculture is the main occupation of the people, who cultivate plantation crops such as rubber.

Perunilam is a small Village/hamlet in Meenachil Taluk in Kottayam district of Kerala State, India. It comes under Poonjar Panchayath. It belongs to South Kerala Division. It is located 44 km East from District headquarters Kottayam. 2.5 km from Erattupetta. 149 km from State capital Thiruvananthapuram. Main agricultural crop is rubber. The popular Christian Pilgrim Centre Bharananganam and St. George's Syro-Malabar Catholic Forane Church, Aruvithura is near to Perunilam. Perunilam Kurishupally is located in Perunilam. Malayalam is the Local Language here. Kottayam Rail Way Station is major railway station 40 km near to Perunilam. 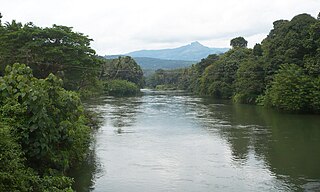 The MeenachilRiver or Meenachilaar, also known as Kavanar, Valanjar, is a river in Kerala. It is one of the most treacherous rivers in Kerala due to its flash floods, heavy undercurrents and woods and debris it carries from the mountains. It flows through the heart of Kottayam district, Kerala state in southern India. 78km long, originates in the Western Ghats main tributaries are Theekoy aaru from Vagamon hills, Poonjar Aaru and Chittar, flowing westward through the city of Kottayam and other towns like Poonjar, Teekoy, Erattupetta, Bharananganam, Pala, Mutholy, Cherpunkal, Kidangoor and Kumarakom before emptying into the Vembanad Lake on the shore of the Indian Ocean.

Paika is a small town 8 kilometres (5.0 mi) from Palai on the Pala-Ponkunnam road of Muvattupuzha - Punalur SH:08, in Kottayam district, Kerala, India. It is part of Meenachil Taluka, known as one of the most fertile agricultural regions of Travancore. The town is well connected to the plantation towns of Kanjirapally, Erattupetta and Ponkunnam. The majority of residents are Syrian Malabar Nasrani Catholic Christians continuing their traditions from the times of Saint Thomas, an apostle of Jesus Christ. This region is part of the mid-lands of south-eastern Kerala. The main income is from agriculture, mostly rubber plantations.

Vayala is a village located in the Meenachil (Pala) Taluk of Kottayam district, Kerala, India. It is approximately 5 kilometers from the village Kuravilangad, about 11 kilometers from Pala municipality town and about 24 kilometers away from district capital Kottayam.

Pinnakkanadu is a small town located about 40 km East of Kottayam on Kanjirappally-Erattupetta Road, in Kottayam district of Kerala, India. It is 8 km North of Kanjirappally towards Erattupetta, 7 km East of Paika and 15 km West of Mundakkayam.

Kadanad is a Panchayat and Village in Meenachil Taluk of Kottayam district in the Indian state of Kerala.

Aruvithura Church is a Syro-Malabar Catholic church located at Erattupetta, Kottayam district in the Kerala State of India.Traditionally it is believed that the Syrian Catholic Church at Aruvithura was established in AD 151.

Kottayam district is a centre of education in Kerala state. The Orthodox Theological Seminary at Chungam was the first institution to teach English in South India. It was founded in 1815 by Colonel John Monroe. The C.M.S High School was founded by the British missionary, Benjamin Bailey. The first college in Kerala state and the second established under British rule in India was the C.M.S. College (1840). Mahatma Gandhi University is located in Kottayam district.