Michael Arthur Cleary AO (born 30 April 1940) is an Australian former rugby union and rugby league and footballer of the 1950s, 1960s and 1970s, and politician. He represented Australia in both rugby codes as well as in athletics making him one of only four Australians who have represented their country at full international level in three different sports. [2] He represented as a Wallaby in 6 Tests in 1961 and as a Kangaroo in 8 Tests from 1962.

Cleary was born in Randwick, New South Wales and was educated at Waverley College. At aged 17 having set a number of schoolboy sprint records he was offered a sporting scholarship to Stanford University which he declined with his sights set on representing Australia in athletics.

In 1959 he joined the Randwick DRUFC and he played in the club's 1960 winning first-grade premiership side. He was selected in the Australian national side for all three Tests of the 1961 series against Fiji and made further Wallaby appearances against France and against the Springboks on the 1961 tour of South Africa.

After leaving rugby union and during his first year of rugby league with the South Sydney Rabbitohs he maintained his amateur status to enable his selection for the Commonwealth Games later that year. He represented Australia in Athletics at the 1962 British Empire and Commonwealth Games in Perth, collecting the Bronze Medal for the 100 yard sprint. The Gregory's source records him as having clocked 9.3 secs for the 100 yards during his athletic career. [3]

In 1964 he beat the rugby league speedster Ken Irvine in a A£2,000 match race at Wentworth Park, and in 1966 he won the Australian professional 130m sprint race.

Cleary joined the South Sydney Rabbitohs in 1962 along with Jim Lisle his Wallaby three-quarter partner. Cleary was a Winger with the club throughout the 1960s playing in three premiership winning sides in 1967, 1968 and 1970. Cleary finished his first grade career with the Rabbitoh's neighbouring club, the Eastern Suburbs Roosters, in 1971. This made him ideally suited to represent his future NSW State electoral district of Coogee, which sits close to the geographic border between the two clubs.

His international rugby league debut in the 1st Test against Great Britain in Sydney on 9 June 1962 saw Cleary become Australia's 29th dual-code international, following Arthur Summons and preceding Jim Lisle. He made Test appearances against New Zealand in 1963, 1965 and 1969; against France in 1964 and was selected for the 1963-64 Kangaroo tour of Great Britain and France [4] during which he made one Test and twenty tour match appearances.

He is one of only four Australian sportsmen to represent internationally in three different sports at the senior level (see also Dick Thornett and Snowy Baker).

In the Queen's Birthday Honours list of 1992, Cleary was awarded an Officer of the Order of Australia for his service to the New South Wales Parliament, [6] and in 2000 he was awarded the Australian Sports Medal for his achievements as a Kangaroo player. [7] He was inducted into the Sport Australia Hall of Fame in 1999. [2]

Randwick District Rugby Union Football Club, also known as the Galloping Greens, is an Australian rugby union club which competes in the Sydney premier grade rugby union competition. The club was formed in 1882 and since then has won 32 first grade premierships and six Australian club championships. It is one of the traditional powerhouses of the Shute Shield competition, winning 14 titles from 1978 to 1996. Randwick's colours are myrtle green and the club's home ground is Coogee Oval. In the 1980s the club produced many Wallabies, including the Ella brothers. Its history has seen many of Australia's best players represent the club, including the likes of George Gregan and David Campese. In all, 93 Randwick players have pulled on a Wallaby jersey, and nine have had the honour of captaining their country.

Kenneth William Catchpole was an Australian rugby union footballer. A state and national representative half-back, he played twenty-seven matches for Australia, thirteen as captain. Catchpole rose through the ranks at the Randwick club as a young man, before making his debut for New South Wales at only 19 years of age, then captaining Australia at age 21. He is considered one of Australia's greatest rugby scrumhalves.

Sir Nicholas Michael Shehadie, was a Lord Mayor of Sydney (1973–1975) and national representative rugby union captain, who made thirty career test appearances for Australia between 1947 and 1958. He was President of the Australia Rugby Union from 1980 to 1987; in that role he pushed for and succeeded in persuading the International Rugby Board to launch the Rugby World Cup. He is an inductee into both the Australian Rugby Union Hall of Fame and the IRB Hall of Fame.

Peter Tunks is an Australian former professional rugby league footballer who played in the 1970s, 1980s and 1990s, and coached in the 1990s. He played for the South Sydney Rabbitohs, Canterbury-Bankstown Bulldogs, Penrith Panthers, New South Wales, and the Australian national side. After that he played with a number of clubs in England.

Bob McCarthy MBE is an Australian former professional rugby league footballer and coach. He played for the South Sydney Rabbitohs, Canterbury-Bankstown Bulldogs, New South Wales and for the Australian national side. He later coached in Brisbane, taking Souths Magpies to a premiership in 1981 and coaching the Gold Coast-Tweed Giants upon their entry to the Winfield Cup. Since 2001 he has been the Chairman of both the Australian and NSW state selection panels.

Kevin James Ryan, born 26 August 1934 in Ipswich, Queensland is an Australian, former state parliamentarian and local mayor, barrister and advocate. In the 1950s and 1960s he was an Australian dual-code rugby international representative and had previously been a Queensland amateur boxing champion in 1958 and 1959, who trialled for the 1960 Olympics.

Richard Norman Thornett was one of five Australians to have represented their country in three sports. He was an Olympic water polo player before becoming a rugby league and rugby union player – a dual code international representative. 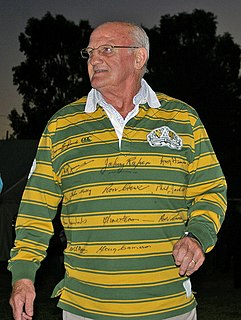 Arthur James Summons was an Australian representative rugby union and rugby league player, a dual-code rugby international fly-half or five-eighth. He captained the Australian national rugby league team in five undefeated test matches from 1962 until 1964 and later also coached the side. 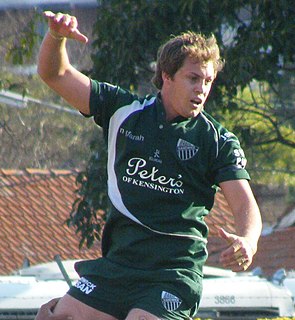 Stephen Hoiles is an Australian rugby union footballer. He plays Super Rugby for the New South Wales Waratahs and previously turned out for the Brumbies. He also represented the Australia national rugby union team 16 times between 2004 and 2008.

Ronald James Lisle was an Australian rugby union and rugby league player and a dual code rugby international. He represented the Wallabies in 4 tests in 1961 and the Australia national rugby league team in 13 matches on the 1963 Kangaroo tour.

The Sydney Roosters Juniors are officially known as the Eastern Suburbs District Junior Rugby League. It is an affiliation of junior clubs in the Eastern Suburbs area, covering the Woollahra and Waverley local government areas (LGAs), the northern parts of the Randwick LGA and also the eastern areas of the City of Sydney LGA. 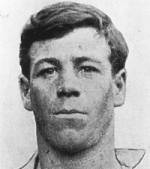 Herbert R. 'Herb' Gilbert was an Australian rugby league and rugby union player – a dual-code international. He represented the Wallabies in 3 Tests in 1910 and the Kangaroos in 7 Tests from 1911 to 1920, his last two as captain. The captain-coach of the St. George Dragons club in their inaugural season, he is considered one of the nation's finest footballers of the 20th century His sons, Herb Gilbert, Jr and Jack Gilbert were also notable rugby league footballers.

John S. H. Rosewell was an Australian rugby union and pioneer professional rugby league footballer and represented his country at both sports – a dual-code international.

Denis Reginald Donoghue (1926–1993) was a champion Australian rugby league footballer, coach and administrator who starred in six premierships, winning 5, with the South Sydney Rabbitohs during their second 'Golden Era', represented New South Wales and Australia during the years of 1948–1957. He also fought as a boxer.

Alfred Lewis "Smacker" Blair (1896–1944) was an Australian rugby league footballer and coach whose playing career ran from 1917 to 1930 with the South Sydney Rabbitohs. A skillful five-eighth he made a single appearance for the Australian national team in 1924.