Last updated October 26, 2020
Not to be confused with Molecular mass or Mass number.

The molecular weight is very commonly used as a synonym of molar mass, particularly for molecular compounds; however, the most authoritative sources define it differently (see molecular mass).

The formula weight is a synonym of molar mass that is frequently used for non-molecular compounds, such as ionic salts.

The molar mass is an intensive property of the substance, that does not depend on the size of the sample. In the International System of Units (SI), the base unit of molar mass is kg/mol. However, for historical reasons, molar masses are almost always expressed in g/mol.

For chemical elements without isolated molecules, such as carbon and metals, the molar mass is computed dividing by the number of moles of atoms instead. Thus, for example, the molar mass of iron is about 55.845 g/mol.

Between 1971 and 2019, SI defined the "amount of substance" as a separate dimension of measurement, and the mole was defined as the amount of substance that has as many constituent particles as there are atoms in 12 grams of carbon-12. In that period, the molar mass of carbon-12 was thus exactly 12 g/mol, by definition. Since 2019, a mole of any substance has been redefined in the SI as the amount of that substance containing an exactly defined number of particles, N = 6.02214076×1023. Therefore, the molar mass of a compound now is simply the mass of this number of molecules of the compound.

The molar mass of atoms of an element is given by the relative atomic mass of the element multiplied by the molar mass constant, Mu ≈ 1.000000×10−3 kg/mol = 1.000000 g/mol. [3] For normal samples from earth with typical isotope composition, the atomic weight can be approximated by the standard atomic weight [4] or the conventional atomic weight.

Multiplying by the molar mass constant ensures that the calculation is dimensionally correct: standard relative atomic masses are dimensionless quantities (i.e., pure numbers) whereas molar masses have units (in this case, grams/mole).

Some elements are usually encountered as molecules, e.g. hydrogen (H
2), sulfur (S
8), chlorine (Cl
2). The molar mass of molecules of these elements is the molar mass of the atoms multiplied by the number of atoms in each molecule:

The molar mass of a compound is given by the sum of the relative atomic mass A
r of the atoms which form the compound multiplied by the molar mass constant M
u:

Here, M
r is the relative molar mass, also called formula weight. For normal samples from earth with typical isotope composition, the standard atomic weight or the conventional atomic weight can be used as an approximation of the relative atomic mass of the sample. Examples are:

An average molar mass may be defined for mixtures of compounds. [1] This is particularly important in polymer science, where different polymer molecules may contain different numbers of monomer units (non-uniform polymers). [5] [6]

The average molar mass of mixtures

can be calculated from the mole fractions

of the components and their molar masses

It can also be calculated from the mass fractions

Molar mass is closely related to the relative molar mass (M
r) of a compound, to the older term formula weight (F.W.), and to the standard atomic masses of its constituent elements. However, it should be distinguished from the molecular mass (which is confusingly also sometimes known as molecular weight), which is the mass of one molecule (of any single isotopic composition) and is not directly related to the atomic mass, the mass of one atom (of any single isotope). The dalton, symbol Da, is also sometimes used as a unit of molar mass, especially in biochemistry, with the definition 1 Da = 1 g/mol, despite the fact that it is strictly a unit of mass (1 Da = 1 u = 1.66053906660(50)×10−27 kg, as of 2018 CODATA recommended values).

Gram atomic mass is another term for the mass, in grams, of one mole of atoms of that element. "Gram atom" is a former term for a mole.

Molecular weight (M.W.) is an older term for what is now more correctly called the relative molar mass (M
r). [8] This is a dimensionless quantity (i.e., a pure number, without units) equal to the molar mass divided by the molar mass constant. [9]

Molecular masses are calculated from the atomic masses of each nuclide, while molar masses are calculated from the standard atomic weights [11] of each element. The standard atomic weight takes into account the isotopic distribution of the element in a given sample (usually assumed to be "normal"). For example, water has a molar mass of 18.0153(3) g/mol, but individual water molecules have molecular masses which range between 18.0105646863(15) u (1H
216O) and 22.0277364(9) u (2H
218O).

The distinction between molar mass and molecular mass is important because relative molecular masses can be measured directly by mass spectrometry, often to a precision of a few parts per million. This is accurate enough to directly determine the chemical formula of a molecule. [12]

The precision to which a molar mass is known depends on the precision of the atomic masses from which it was calculated, and value of the molar mass constant. Most atomic masses are known to a precision of at least one part in ten-thousand, often much better [4] (the atomic mass of lithium is a notable, and serious, [13] exception). This is adequate for almost all normal uses in chemistry: it is more precise than most chemical analyses, and exceeds the purity of most laboratory reagents.

A useful convention for normal laboratory work is to quote molar masses to two decimal places for all calculations. This is more accurate than is usually required, but avoids rounding errors during calculations. When the molar mass is greater than 1000 g/mol, it is rarely appropriate to use more than one decimal place. These conventions are followed in most tabulated values of molar masses. [14] [15]

Molar masses are almost never measured directly. They may be calculated from standard atomic masses, and are often listed in chemical catalogues and on safety data sheets (SDS). Molar masses typically vary between:

While molar masses are almost always, in practice, calculated from atomic weights, they can also be measured in certain cases. Such measurements are much less precise than modern mass spectrometric measurements of atomic weights and molecular masses, and are of mostly historical interest. All of the procedures rely on colligative properties, and any dissociation of the compound must be taken into account.

The measurement of molar mass by vapour density relies on the principle, first enunciated by Amedeo Avogadro, that equal volumes of gases under identical conditions contain equal numbers of particles. This principle is included in the ideal gas equation:

where n is the amount of substance. The vapour density (ρ) is given by

Combining these two equations gives an expression for the molar mass in terms of the vapour density for conditions of known pressure and temperature.

The freezing point of a solution is lower than that of the pure solvent, and the freezing-point depression (ΔT) is directly proportional to the amount concentration for dilute solutions. When the composition is expressed as a molality, the proportionality constant is known as the cryoscopic constant (K
f) and is characteristic for each solvent. If w represents the mass fraction of the solute in solution, and assuming no dissociation of the solute, the molar mass is given by

The boiling point of a solution of an involatile solute is higher than that of the pure solvent, and the boiling-point elevation (ΔT) is directly proportional to the amount concentration for dilute solutions. When the composition is expressed as a molality, the proportionality constant is known as the ebullioscopic constant (K
b) and is characteristic for each solvent. If w represents the mass fraction of the solute in solution, and assuming no dissociation of the solute, the molar mass is given by

Stoichiometry is the calculation of reactants and products in chemical reactions in chemistry.

The Avogadro constant (NA or L) is the proportionality factor that relates the number of constituent particles (usually molecules, atoms or ions) in a sample with the amount of substance in that sample. Its SI unit is the reciprocal mole, and it is defined as NA = 6.02214076×1023 mol−1. It is named after the Italian scientist Amedeo Avogadro.

Lorenzo Romano Amedeo Carlo Avogadro, Count of Quaregna and Cerreto (, also, Italian: [ameˈdɛːo avoˈɡaːdro]; 9 August 1776 – 9 July 1856) was an Italian scientist, most noted for his contribution to molecular theory now known as Avogadro's law, which states that equal volumes of gases under the same conditions of temperature and pressure will contain equal numbers of molecules. In tribute to him, the number of elementary entities (atoms, molecules, ions or other particles) in 1 mole of a substance, 6.02214076×1023, is known as the Avogadro constant, one of the seven SI base units and represented by NA.

The dalton or unified atomic mass unit is a unit of mass widely used in physics and chemistry. It is defined as 1/12 of the mass of an unbound neutral atom of carbon-12 in its nuclear and electronic ground state and at rest. The atomic mass constant, denoted mu is defined identically, giving mu = m(12C)/12 = 1 Da.

Avogadro's law is an experimental gas law relating the volume of a gas to the amount of substance of gas present. The law is a specific case of the ideal gas law. A modern statement is:

Monoisotopic mass (Mmi) is one of several types of molecular masses used in mass spectrometry. The theoretical monoisotopic mass of a molecule is computed by taking the sum of the accurate masses of the primary isotope of each atom in the molecule. For small molecules made up of low atomic number elements the monoisotopic mass is observable as an isotopically pure peak in a mass spectrum. This differs from the nominal molecular mass, which is the sum of the mass number of the primary isotope of each atom in the molecule and is an integer. It also is different from the molar mass, which is a type of average mass. For some atoms like carbon, oxygen, hydrogen, nitrogen, and sulfur the Mmi of these elements is exactly the same as the mass of its natural isotope, which is the lightest one. However, this does not hold true for all atoms. Iron's most common isotope has a mass number of 56, while the stable isotopes of iron vary in mass number from 54 to 58. Monoisotopic mass is typically expressed in daltons (Da), also called unified atomic mass units (u). 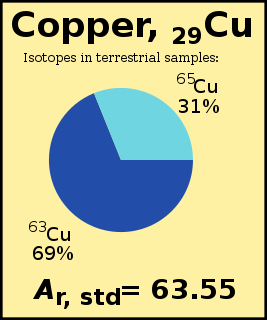 The molar mass constant, usually denoted by Mu, is a physical constant defined as the ratio of the molar mass of an element and its relative mass. 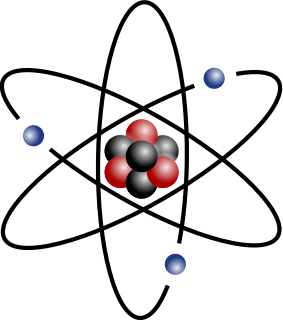