The Monthly Weather Review is a peer-reviewed scientific journal published by the American Meteorological Society. It covers research related to analysis and prediction of observed and modeled circulations of the atmosphere, including technique development, data assimilation, model validation, and relevant case studies. This includes papers on numerical techniques and data assimilation techniques that apply to the atmosphere and/or ocean environment. The editor-in-chief is David M. Schultz (University of Manchester).

The journal was established in July 1872 by the United States Army Signal Corps. It was issued by the Office of the Chief Signal Officer from 1872 until 1891. In 1891, the Signal Office's meteorological responsibilities were transferred to the Weather Bureau under the United States Department of Agriculture. The Weather Bureau published the journal until 1970 when the Bureau became part of the newly formed National Oceanic and Atmospheric Administration, which published it until the end of 1973. Since 1974, it has been published by the American Meteorological Society. [1]

The journal is abstracted and indexed in Current Contents/Physical, Chemical & Earth Sciences and the Science Citation Index. [2] According to the Journal Citation Reports , the journal has a 2012 impact factor of 2.758. [3] In 2016, the impact factor was 3.043. [4]

Cleveland Abbe was an American meteorologist and advocate of time zones. 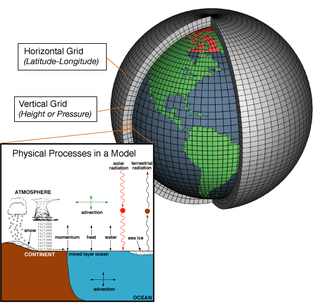 Numerical weather prediction (NWP) uses mathematical models of the atmosphere and oceans to predict the weather based on current weather conditions. Though first attempted in the 1920s, it was not until the advent of computer simulation in the 1950s that numerical weather predictions produced realistic results. A number of global and regional forecast models are run in different countries worldwide, using current weather observations relayed from radiosondes, weather satellites and other observing systems as inputs.

The Cooperative Institute for Research in the Atmosphere (CIRA) is a scientific research institution at Colorado State University (CSU) that operates under a cooperative agreement with the National Oceanic and Atmospheric Administration (NOAA) Office of Oceanic and Atmospheric Research (OAR) and the National Environmental Satellite, Data, and Information Service (NESDIS). Atmospheric research at CIRA focuses on augmenting operational meteorology with advanced techniques in satellite observations and retrievals, numerical modeling and computational techniques, and data analysis, visualization, and storage. Along with NOAA, CIRA also partners with the National Science Foundation (NSF), the National Aeronautics and Space Administration (NASA), the National Park Service (NPS), and the Department of Defense (DoD). 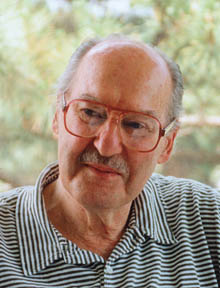 Joseph Smagorinsky was an American meteorologist and the first director of the National Oceanic and Atmospheric Administration (NOAA)'s Geophysical Fluid Dynamics Laboratory (GFDL). 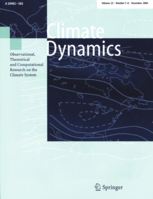 Climate Dynamics is a peer-reviewed scientific journal published by Springer Science+Business Media. It covers all aspects of the dynamics of global climate systems, including analytical and numerical modeling research on the structure and behavior of the atmosphere, oceans, cryosphere, biomass, and land surface as interacting components of the dynamics of global climate. The journal also publishes reviews and papers emphasizing an integrated view of the physical and biogeochemical processes governing climate and climate change.

Nature Geoscience is a monthly peer-reviewed scientific journal published by the Nature Publishing Group. The Chief Editor is Tamara Goldin, who took over from Heike Langenberg in February 2020. It was established in January 2008.

Meteoritics & Planetary Science is a monthly peer-reviewed scientific journal that was established in 1953. It is published by Wiley-Blackwell on behalf of the Meteoritical Society. Since January 1, 2003, the editor-in-chief is A.J. Timothy Jull. The journal's broad focus is planetary science. 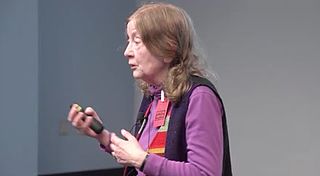 Planetary and Space Science, published 15 times per year, is a peer-reviewed scientific journal established in 1959. It publishes original research articles along with short communications (letters). The main topic is Solar System processes which encompasses multiple areas of the natural sciences. Numerical simulations of solar system processes are also conducted at ground-based facilities or on-board space platforms. The editor-in-chief is Angelo Pio Rossi. It is published by Elsevier.

Reviews of Geophysics is a quarterly peer-reviewed scientific journal published by Wiley-Blackwell on behalf of the American Geophysical Union. The current editor-in-chief is Fabio Florindo.

The Canadian Journal of Physics is a peer-reviewed scientific journal covering a broad range of physics. It was established in 1951 as the continuation of Canadian Journal of Research, Section A: Physical Sciences. The journal is published monthly by the NRC Research Press and edited by Michael Steinitz. It is also affiliated with the Canadian Association of Physicists.

Theoretical and Applied Climatology is a monthly journal published by Springer Science+Business Media which focuses on atmospheric sciences and climatology. It was established in 1949 as Archives for Meteorology, Geophysics and Bioclimatology, Series B and obtained its current name in 1986. It is published by Springer Science+Business Media and the editor-in-chief is Hartmut Graßl. According to the Journal Citation Reports, the journal has a 2012 impact factor of 1.759, ranking it 34th out of 74 journals in the category "Meteorology and Atmospheric Sciences".

Advances in Atmospheric Sciences is a bimonthly peer-reviewed scientific journal co-published by Springer Science+Business Media and Science Press. It covers research on the dynamics, physics and chemistry of the atmosphere and oceans, including weather systems, numerical weather prediction, climate dynamics and variability, and satellite meteorology. It was established in 1984. The editors-in-chief are D. Lü, H. Wang, and M. Xue (University of Oklahoma. According to the Journal Citation Reports, the journal has a 2012 impact factor of 1.338.

Digital Signal Processing is a monthly peer-reviewed open access scientific journal covering all areas of signal processing. It as established in 1991 and published by Academic Press, now Elsevier. The editor-in-chief is Ercan E. Kuruoglu.

The Asia-Pacific Journal of Atmospheric Sciences is a quarterly peer-reviewed scientific journal covering the field of atmospheric science. It was established in 1965 as the Journal of the Korean Meteorological Society, obtaining its current title in 2008. It is published by Springer Science+Business Media on behalf of the Korean Meteorological Society and the editor-in-chief is Song-You Hong. According to the Journal Citation Reports, the journal has a 2016 impact factor of 1.65.

Meteorological Applications is a peer-reviewed scientific journal of meteorology published four times per year since 1994. It is published by John Wiley & Sons on behalf of the Royal Meteorological Society.