Neshaminy High School consists of one main hallway, with hallways branching off of the main by department, arranging classes of similar types (such as art, math, social studies, and science) in the same region of the school.

In 2003 the Neshaminy school board proposed the demolition of the current school building and construction of a new facility on current school grounds. This plan was priced at $100 million and would require the issuance of an $85 million tax funded bond. In April 2004 residents defeated the new building plan via referendum due in large part to the price. [4]

As an alternative plan, the school board decided to demolish sections of the school at a time and rebuild them as the school year proceeded. This major renovation project was estimated to cost $72 million and would replace 95% of classroom facilities, but will retain some existing structures like the auditorium, gym, cafeteria, and library. Unlike the rest of the school which has only received basic upkeep since the 1950s these facilities have already undergone major renovation as recently as 1995. The project was completed by September 2009. [4]

In 2015–2016 students at this school took Advanced Placement (AP) exams in the following areas:

There are approximately 3,000 students in grades nine through twelve. [7] It is the only high school in the Neshaminy School District. Neshaminy High School is accredited by the Middle Atlantic States Association of Colleges and Secondary School.

The Playwickian is the high school's award-winning newspaper. The name "Playwickian" comes from one of the names of the Native American tribes who called the area on the Neshaminy Creek home. The Playwickian has received awards from Columbia University for outstanding performance. [8] Due to being a Pennsylvania student publication, the Playwickian is subjected to and granted certain rights by Section 12.9 of the Pennsylvania Code. [9] The newspaper is distributed once a month with all the articles written by the students who choose to take the journalism course. According to their mission statement, the Playwickian is, "Saving the world, one word at a time" and is dedicated to providing "the student body with a voice and exercise students First Amendment rights while remaining unbiased and truthful in the reporting of information and the quest for self-expression." Relations between the paper and administration are sometimes stressed, with censorship an ongoing issue.

The football team's biggest rivals are the neighboring Pennsbury Falcons, who also have a strong football history and winning tradition. The two teams have played each other annually since 1930. The series often draws large crowds, with 15,000 attending the 1971 game at Neshaminy when both teams came in undefeated.[ citation needed ] Pennsbury leads the series 36-35-7. The North Penn Knights, another annual powerhouse, is another major rival, and were in the same conference with Neshaminy through 2007.

Neshaminy High School athletic teams are known as the Redskins. In 2012, a Neshaminy parent of Native American descent started a campaign to change the name because of its racially offensive and harmful nature. The parent spoke at numerous board meetings, with no progress being made. A complaint was filed with Pennsylvania Human Relations Commission (PHRC) in 2013. After a thorough investigation by PHRC a ruling was made against Neshaminy school district and they were told to change the name along with other terms of adjustment, a ruling that the school administration appealed. On October 23, 2013, the student editorial board of the high school's newspaper, the Playwickian, declared its intention to no longer reference the team with the term "Redskin" in its publications. [12] The school administration responded by declaring that the Playwickian editorial board lacks the power to decide to stop using the term "Redskins". [13] On April 2 of the following year, students Jackson Haines and Emily Scott received awards from the 2014 Scholastic Keystone Press Awards contest from articles published in the Playwickian on the issue. [14] Haines would also receive a Gold Circle Award from the Columbia Scholastic Press Association later that year for the same article. In early July, the Pennsylvania High School Press Association awarded Journalism Teacher of the Year to Tara Huber, an adviser for the Playwickian for assisting the students on publishing publications for the Playwickian during the issue. [15]

Towards the middle of May 2014, a student submitted an opinion editorial containing the "Redskin" term. Principal McGee told the students that they would be required to run the piece in the paper or the final issue would not be allowed to be distributed. The Playwickian decided to run their last issue of the year without the piece a few days later. McGee and the school reacted by restricting access to the issue through confiscating the publication, calling for an emergency meeting with co-editor Gillian McGoldrick, and restricting access to accounts on social media and the website for the Playwickian. [16] [17] McGee would later defend his actions in a statement on the website for the school. [18] On June 26, the school board allowed the Playwickian to ban the term "Redskin" in articles, but required that editorials and Letters to the Editor had to be published with the term present and uncensored. [19]

The PHRC made a preliminary finding in 2015 that the name Redskins is "racially derogatory" and creates a "hostile educational environment." The case will now proceed to a hearing by the full commission unless the school district takes steps to remedy the situation, which thus far they have refused to do. [20] After six years of controversy, a hearing was held by the PHRC in January, 2019. [21]

In November 2019, the PHRC ruled that the school could continue to use the name, but must cease using any imagery promoting negative stereotypes of Native Americans, and must educate its students about Native American history to prevent the use of stereotypes. [22] The school district spent over $400,000 in legal fees in its campaign to retain the Redskin moniker. [23]

In October 2006, following four suicides in that year's graduating class, [24] the SADD (Students Against Destructive Decisions) Club at Neshaminy High School implemented a Yellow Ribbon Suicide Prevention Program. The program is designed to empower youth by giving them permission and a way to ask for help through the Yellow Ribbon card. The Neshaminy High School staff has been trained in the purpose of the Yellow Ribbon card and is prepared to assist students if necessary. [25] The SADD club disbanded in 2014, due to lack of faculty support, and funding was cut for another organization, the Challenge Day club, aimed at helping students with mental health challenges. [24] This led a student newspaper editorialist to question the degree to which the district is committed to preventing a recurrence of the 2006 tragedies. [24] 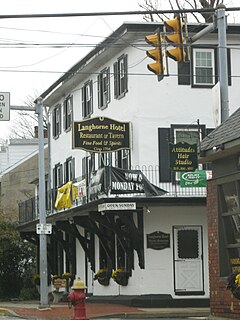 Langhorne Borough is a borough in Bucks County, Pennsylvania, United States. The population was 1,622 at the 2010 census.

Lower Southampton Township is a township in Bucks County, Pennsylvania, United States. The population was 18,909 at the 2010 census. 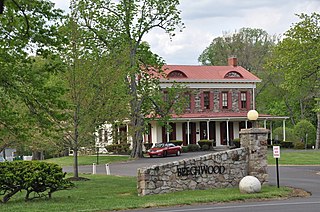 Christopher Kurt Bahr is a former professional American football and soccer player. He was a placekicker in the National Football League (NFL) and played midfielder in the North American Soccer League.

Moon Area High School is a public high school located in the Moon Area School District in Pennsylvania, United States. The school serves students in grades 9-12 from Moon and Crescent, South Heights borough, along with the communities of Glenwillard and Wireton, and several other unincorporated villages. The Moon Area School District's High School and Middle School facilities are located in the center of Moon. 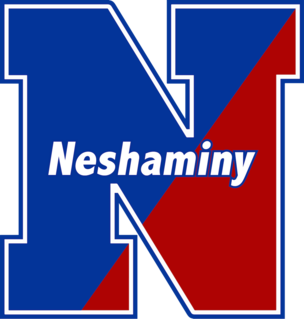 Nazareth High School is a public high school located in Nazareth, Pennsylvania, in the United States. It is the only high school in the Nazareth Area School District and serves grades 9 through 12. Its mascot is the Blue Eagle and school colors are blue and white.

Pennsylvania Route 213 is a 6.95-mile-long (11.18 km) state highway in Bucks County, Pennsylvania. The route runs from PA 532 in Feasterville, which is located in Lower Southampton Township, north to U.S. Route 1 Business in Middletown Township, near the Oxford Valley Mall. PA 213 is signed as a north-south route but it actually travels east–west through its route, with the northern terminus being well east of the southern terminus but only slightly further north. Along the way, PA 213 passes through Langhorne and has intermediate junctions with PA 413 in Langhorne and US 1 in Middletown Township. The westernmost part of PA 213 was originally chartered as the Bridgetown and Feasterville Turnpike in 1844. In 1913, the eastern portion of present-day PA 213 became a part of the route for the Lincoln Highway, being bypassed in 1923. PA 213 was designated onto its current alignment in 1928.

Penn Hills High School is a public secondary school located in Penn Hills, east of Pittsburgh, Pennsylvania, United States. It is the sole high school operated by the Penn Hills School District. In 2015, enrollment was reported as 1,453 pupils in 9th through 12th grades, with 60.5% of pupils eligible for a free lunch due to family poverty. Additionally, 12.8% of pupils received special education services, while 6.6% of pupils were identified as gifted. Penn Hills Senior High School employed 100 teachers. Per the Pennsylvania Department of Education, 100% of the teachers were rated "Highly Qualified" under the federal No Child Left Behind Act.

Frank Farry was elected to represent the 142nd Legislative District in November 2008. He has been appointed to serve on the House Consumer Affairs, Intergovernmental Affairs, Labor Relations, Urban Affairs, and Veterans Affairs and Emergency Preparedness Committees.

The Penn State Nittany Lions men's soccer team is an intercollegiate varsity sports team of Pennsylvania State University. The team is a member of the Big Ten Conference of the National Collegiate Athletic Association. Penn State's intercollegiate soccer program began in 1911 and has won or shared 11 national championships and 6 conference tournament championships. In 1959, the team joined the National Collegiate Athletic Association when it added men's soccer to its program and in 1987 joined the Atlantic 10 Conference as a charter member. At the conclusion of its 1990 season the Nittany Lions joined the Big Ten Conference where they play today.

Sports teams named Redskins are part of the larger Native American mascot controversy regarding the use of Native American names, images and symbols by non-native sports teams. Teams of this name have received particular public attention because the term redskin is now generally regarded as disparaging and offensive.

Frank A. Conroy was an American football coach. He served as the head football coach at Winona State University in Winona, Minnesota from 1976 to 1977, compiling a record of 4–16.