Unless stated, all riders are from New Zealand

Ullevi, sometimes known as Nya Ullevi, is a multi-purpose stadium in Gothenburg, Sweden. It was built for the 1958 FIFA World Cup, but since then has also hosted the World Allround Speed Skating Championships six times; the 1995 World Championships in Athletics and the 2006 European Athletics Championships; the UEFA Cup Winners' Cup finals in 1983 and 1990; the UEFA Euro 1992 final, the UEFA Cup final in 2004; and annually hosted the opening ceremony of the Gothia Cup, the world's largest football tournament in terms of the number of participants. IFK Göteborg has also played two UEFA Cup finals at the stadium, in 1982 and 1987, but then as "home game" in a home and away final. The stadium has hosted several events, including football, ice hockey, boxing, racing, athletics and concerts.

Western Springs Stadium is a stadium in Auckland, New Zealand. Built within a natural amphitheatre, it is primarily used for rugby union matches during the winter and for speedway during the summer. It is also occasionally used for large concerts and festivals. 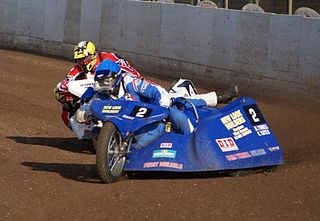 Shane Bowes is a former motorcycle speedway rider. Bowes was a finalist in the 1990 Under-21 Speedway World Championship, finishing in eighth place. He also rode in the United Kingdom between 1987 and 1997, most notably spending seven seasons with the Glasgow Tigers.

The German Individual Speedway Championship is a Motorcycle speedway championship held each year to determine the German national champion.

The 1991 Australian Under-21 Individual Speedway Championship was the 5th running of the Australian Under-21 Individual Speedway Championship organised by Motorcycling Australia. The final took place on 6 January 1991 at the Olympic Park Speedway in Mildura, Victoria. The championship was won by Mildura's own Leigh Adams who won the third of his four national Under-21 championships. Shane Parker from Adelaide was second with another Mildura rider Jason Lyons in third place. Parker defeated Lyons in a run-off for the minor placings after both finished the meeting on 13 points. Former South Australian champion Scott Norman defeated Dave Hamnett from New South Wales in a run-off for fourth place after both finished the meeting on 11 points.