Nicholas Heyward (born 20 May 1961) is an English singer-songwriter and guitarist. [1] He came to international attention in the early 1980s as the lead singer and songwriter for Haircut One Hundred. He and the band parted ways after their first album, after which he continued as a solo artist.

Born in Beckenham, [2] Heyward spent his early years in and around south London. He attended Kelsey Park School for Boys where he studied art and photography. He left school at 16 to work as a commercial artist. [3]

Heyward and school friends Graham Jones and Les Nemes, [4] the core of Haircut One Hundred, started bands together as far back as 1977. They were first known as Rugby, then the Boat Party, Captain Pennyworth and Moving England, before settling on Haircut One Hundred. [5] The band signed with Arista Records in 1981 and had four UK Top 10 singles between 1981 and 1982. [6] Their debut album, Pelican West (1982), written by Heyward, reached No. 2. It was Certified Platinum [7] by the British Phonographic Industry.

Work on the band's second album commenced in October 1982 but, in January 1983, a statement was issued confirming that Heyward had left the band, [1] and percussionist Marc Fox had taken over on vocals. At the time of the announcement, Heyward told Smash Hits magazine that he had been contemplating going solo for a while and had already recorded some tracks with session musicians. [8] However, many years later, Heyward stated that he had been struggling with stress and depression at the time after a year of constant work and pressure which led to him being, in effect, sacked by the other members of the band. [9] [10]

Over the years, the band has reformed several times. Though not performing together as of 2017, Heyward described a "deep love" for the band and remarked that "the door is always open". [11] In an interview with Lorraine , he said he was "ever hopeful" that the band would one day play a reunion show at the Roundhouse where Pelican West was recorded. [12]

Postcards From Home , Heyward's second solo album, was released in 1986, [1] and featured the singles "Over the Weekend" and "Goodbye Yesterday". [13] By 1988, he had moved to Warner Bros. Records and released his third album, I Love You Avenue , which included the single "You're My World".

Since 1998, Heyward has released two independent albums: Open Sesame Seed (2001), a collaboration with British actor/singer Greg Ellis, and featuring Ellis reading Heyward's poetry to the accompaniment of Heyward's musical backing; and The Mermaid and the Lighthouse Keeper (2006), an album of songs recorded with singer/actress India Dupre. [18]

In November 2013, Heyward announced on his website that he was in the process of recording a new album with his son, Oliver. [19] A preview of the album was made available on the site in October 2015. [20] A PledgeMusic campaign to support the album was announced on Heyward's website, on 4 April 2017 [21] and the album title, Woodland Echoes , was released the following day. [22]

Heyward married Glaswegian Marion Killen in 1987. They had two children, Oliver and Katie, before divorcing in 2000. [23] In 1998, he had a spiritual awakening [24] that he described as a feeling of complete contentment and a deep connection with nature.

Heyward lives in Stoke Row, South Oxfordshire, [25] and in February 2016 announced his engagement to Sarah, his American girlfriend. [26] 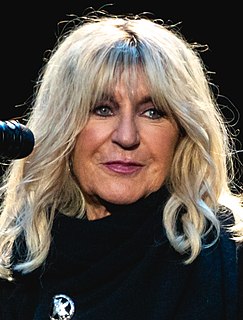 Christine Anne McVie is an English singer, songwriter and keyboardist, best known as one of the three lead vocalists and the keyboardist of Fleetwood Mac, whom she joined in 1970. She has also released three solo albums. She is known for her contralto vocals and her direct but poignant lyrics, which focus on love and relationships. AllMusic describes her as an "Unabashedly easy-on-the-ears singer/songwriter, and the prime mover behind some of Fleetwood Mac's biggest hits." Eight of her songs appeared on Fleetwood Mac's 1988 Greatest Hits album.

Haircut One Hundred were a British new wave group formed in 1980 in Beckenham, London by Nick Heyward and Les Nemes. In 1981 and 1982, the band scored four UK top 10 hit singles: "Favourite Shirts ", "Love Plus One", "Nobody's Fool", and "Fantastic Day". 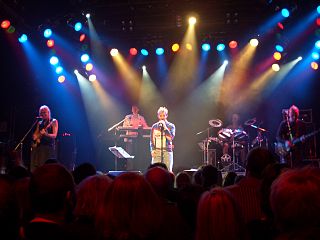 Steve Harley & Cockney Rebel are an English glam rock band from the early 1970s. Their music covers a range of styles from pop to progressive rock. Over the years they have had five albums in the UK Albums Chart and twelve singles in the UK Singles Chart.

Sir David Joseph Dobbyn is a New Zealand musician, singer–songwriter and record producer. In his early career he was a member of the rock group Th' Dudes and was the main creative force in pop band DD Smash. Since then he has released the majority of his recordings as a solo performer. 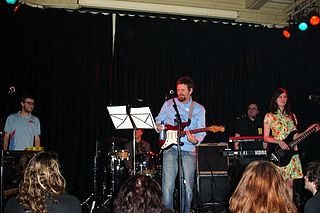 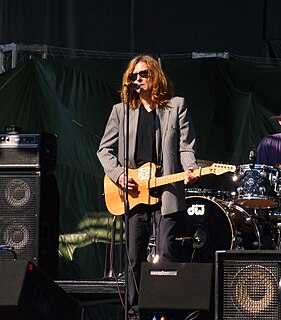 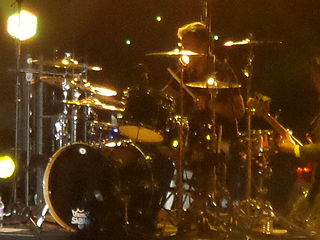 Daniel Mark (Woody) Woodgate is an English musician, songwriter, composer and record producer. In a career spanning more than 30 years, Woodgate came to prominence in the late 1970s as the drummer for the English ska band Madness and went on to become a member of the Anglo-American alternative rock band Voice of the Beehive in the late 1980s. Woodgate began his solo career in 2015, while still a member of Madness, releasing the album In Your Mind. 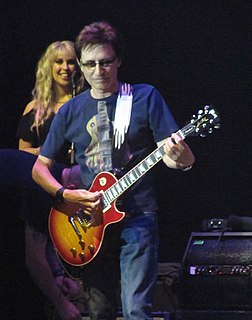 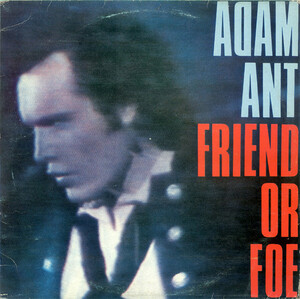 Friend or Foe is the debut solo album by English singer and musician Adam Ant, released in October 1982 by Epic Records in the United States and Columbia Records elsewhere. The album peaked at number 5 in the UK, Adam Ant's highest charting solo album. 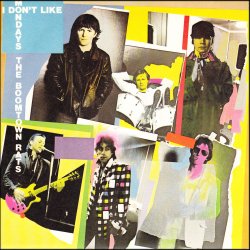 "I Don't Like Mondays" is a song by Irish new wave group The Boomtown Rats about the 1979 Cleveland Elementary School shooting in San Diego. It was released in 1979 as the lead single from their third album, The Fine Art of Surfacing. The song was a number one single in the UK Singles Chart for four weeks during the summer of 1979, and ranks as the sixth biggest hit of the UK in 1979. Written by Bob Geldof and Johnnie Fingers, the piano ballad was the band's second single to reach number one on the UK chart.

Modern Romance is a British pop music band that found popularity in the early 1980s. Formed in 1980 by previous members of an earlier band, the Leyton Buzzards, the band achieved a string of UK chart hits before the original band broke up in 1985. Andy Kyriacou reformed the band in 1999 who continue to perform the band's music. 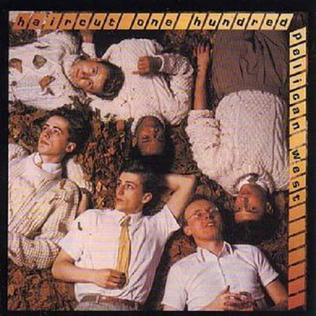 Pelican West is the debut studio album by British new wave band Haircut One Hundred, released in February 1982 by Arista Records. It peaked at No. 2 on the UK Albums Chart and No. 31 on the Billboard 200, and was certified platinum by the British Phonographic Industry.

"Favourite Shirts " is the debut single by the British new wave band Haircut One Hundred, released in October 1981 by Arista Records. The song appears on their 1982 debut album Pelican West. It reached No. 4 on the UK Singles Chart in November 1981 and was certified silver by the BPI for sales in excess of 200,000 copies. 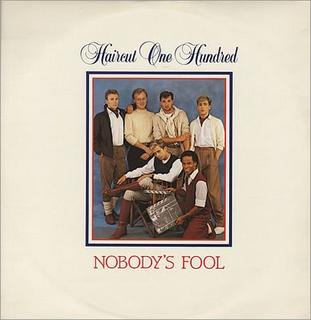 "Nobody's Fool" is a song by British new wave band Haircut One Hundred, released on 13 August 1982 as the band's fourth single. It reached No. 9 on the UK Singles Chart. The song did not initially appear on any album, but was later included as a bonus track on the 1992 reissue of Pelican West.

"Whistle Down the Wind" is the debut solo single by English musician Nick Heyward, from his debut solo album North of a Miracle. Released in March 1983, it was his first release after leaving Haircut One Hundred. The song peaked at No. 13 on the UK Singles Chart, as well as reaching No. 20 on the U.S. Billboard Adult Contemporary chart in February 1984. 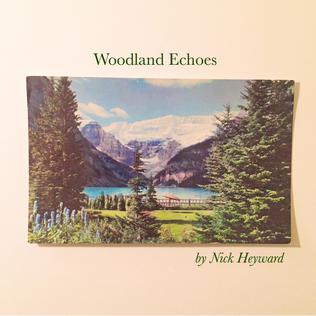 Woodland Echoes is the seventh solo album by English singer-songwriter Nick Heyward. It was released on 4 August 2017 on Gladsome Hawk Records. He has described it as accidentally biographical and influenced by "love, nature, togetherness, ‘70s’ pop, America, open spaces and afternoon tea".