Nip/Tuck is an American medical drama television series created by Ryan Murphy that aired on FX in the United States from July 22, 2003, to March 3, 2010. The series, which also incorporates elements of crime drama, black comedy, family drama, satire, and psychological thriller, focuses on "McNamara/Troy", a cutting-edge, controversial plastic surgery center, and follows the personal and professional lives of its founders Dr. Sean McNamara and Dr. Christian Troy (portrayed by Dylan Walsh and Julian McMahon, respectively). [2] Each episode features graphic, partial depictions of the plastic surgeries on one or more patients, as well as developments in the doctors' personal lives. Focus is also given to McNamara/Troy's anesthesiologist Dr. Liz Cruz, Christian's many sexual partners, and Sean's family. With the exception of the pilot, each episode of the series is named after the patient(s) scheduled to receive plastic surgery.

Unlike most medical dramas, Nip/Tuck used serial storytelling and often had story arcs spanning multiple seasons; for example, seasons two and three focused on a serial rapist known as The Carver, who often mutilates his victims' faces, leading McNamara/Troy to provide pro bono surgery to the victims.

The show premiered on July 22, 2003, and concluded on March 3, 2010, with the 100th episode. [3] While the show was initially set in Miami, at the end of the fourth season, it was relocated to Los Angeles, and many of the characters followed along. The show earned 45 award nominations, winning one Golden Globe and one Emmy Award. [4] Series creator Ryan Murphy said that the medical cases on the show are "100 percent based on fact". [5]

The drama is set in a plastic-surgery center, McNamara/Troy, centering on the two doctors who own it. Sean McNamara (Dylan Walsh) is often found having problems at home due to being seduced by beautiful women on a daily basis, and thus tries to keep his family together by patching up the rocky road in which his family and he are living. Partner Christian Troy (Julian McMahon), though, uses his charm to bring in potential female candidates and conducts vain business deals, almost never failing and ending up with dozens of women in bed. Sean takes his job seriously; he is often found having to fix some of Christian's mistakes.

In its debut season, Nip/Tuck was the highest-rated new series on American basic cable, and the highest-rated basic cable series of all time for the 18–49 and 25–54 age demographics. The fifth season premiered on October 30, 2007, [6] though production was affected by the 2007 Writers Strike. Accordingly, the second half of the fifth season was not screened until January 6, 2009, in the U.S. Another 19 episodes were picked up by FX; airing on October 14, 2009. Following a 3-week hiatus for the Christmas holidays, the show resumed in January 2010, and concluded on March 3, 2010, with its 100th episode. [7] [8] [9] Nip/Tuck filmed its 100th and final episode on June 12, 2009, without creator Ryan Murphy, [10] who was, at the time, in India scouting locations for his film version of the memoir Eat, Pray, Love .

Viewer numbers (based on average total viewers per episode) of Nip/Tuck on FX.

For its third season, FX aired Nip/Tuck solely in the fall of 2005, instead of during the summer season, like the two years prior. John Landgraf, president of FX, stated that such a move was a "huge risk", since it stacked up "against the full barrage of fall network competition". [14] Despite some criticism on its third season, the story arc involving The Carver attracted even more of an audience to the series than any of the seasons before, reaching its climax in a December 20, 2005, 2-hour season finale, entitled "Cherry Peck / Quentin Costa", which became the most-watched scripted program in the history of the FX network.[ citation needed ]

Including "Cherry Peck / Quentin Costa", three episodes of Nip/Tuck rank as the three most-watched scripted programs ever on FX.[ citation needed ] The second-season finale, entitled "Joan Rivers", which aired on October 5, 2004, drew 5.2 million viewers. It was then eclipsed on September 20, 2005, when the third-season premiere, entitled "Momma Boone", drew roughly 5.3 million viewers. Three months later. on December 20, 2005, the aforementioned third-season finale, entitled "Cherry Peck / Quentin Costa", drew 5.7 million viewers. Of those 5.7 million viewers, 3.9 million were in the 18–49 age group demographic, "making the finale the number-one episode among the key advertising demographic of any cable series in 2005. It's also the largest demographic number for any single telecast in the network's history," [14] [ dead link ] according to Zap2It.

In Australia, the series aired on Showcase and Nine Network; in Canada on CTV and Series+; in France on M6; [23] in Ireland on TG4; in New Zealand on TV One and Canterbury Television; and in the United Kingdom on Fox, Sky Living, Sky1 and Channel 4.

Boston Legal is an American legal comedy-drama television series created by David E. Kelley and produced in association with 20th Century Fox Television for ABC. The series aired from October 3, 2004, to December 8, 2008. The series starred James Spader, William Shatner, and Candice Bergen, and is a direct follow-on spin-off to the TV series The Practice, with several characters from that series' eighth season moving to Boston Legal.

The Daytime Emmy Award is an American accolade bestowed by the New York–based National Academy of Television Arts and Sciences in recognition of excellence in American daytime television programming. The first ceremony was held in 1974, expanding what was originally a primetime-themed Emmy Award. Ceremonies generally are held in May or June. 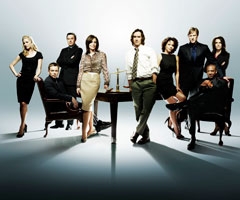 Raising the Bar is an American legal drama created by Steven Bochco and David Feige, which ran on TNT network from September 1, 2008 to December 24, 2009. 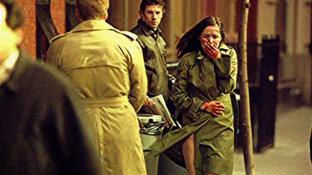 "Get Me a Lawyer" is the pilot episode of the legal drama series Damages, which first aired on July 24, 2007 on FX in the United States. It was written by series creators/executive producers Todd A. Kessler, Glenn Kessler, and Daniel Zelman, and was directed by producer Allen Coulter. In the episode, recent law school graduate Ellen Parsons is recruited to Hewes and Associates, a law firm headed by Patty Hewes, where she is assigned to the "Frobisher case". Billionaire Arthur Frobisher is being sued by his former employees, whom he advised to invest in his company while unloading his own stock, and while Frobisher's attorney Ray Fiske pleads for a settlement price, Patty insists on taking the case to court.

The sixth season of the American television medical drama Grey's Anatomy, commenced airing on the American Broadcasting Company (ABC) in the United States on September 24, 2009, and concluded on May 20, 2010. The season was produced by ABC Studios, in association with Shondaland Production Company and The Mark Gordon Company; the showrunner being Shonda Rhimes and head writer Krista Vernoff. Actors Ellen Pompeo, Sandra Oh, Katherine Heigl, and Justin Chambers reprised their roles as surgical residents Meredith Grey, Cristina Yang, Izzie Stevens, and Alex Karev, respectively. Heigl was released from her contract in the middle of the season, while T. R. Knight did not appear as George O'Malley, because Knight was released from his contract at the conclusion of season five. Main cast members Patrick Dempsey, Chandra Wilson, James Pickens, Jr., Sara Ramirez, Eric Dane, Chyler Leigh, and Kevin McKidd also returned, while previous recurring-star Jessica Capshaw was promoted to a series-regular, and Kim Raver was given star-billing after the commencement of the season. 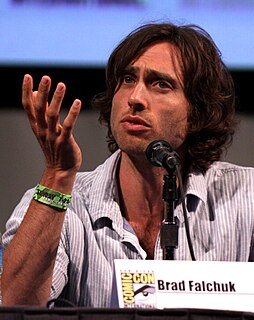 The fifth season of Monk originally aired in the United States on USA Network from July 7, 2006, to March 2, 2007. It consisted of 16 episodes. Tony Shalhoub, Traylor Howard, Ted Levine, and Jason Gray-Stanford reprised their roles as the main characters. A DVD of the season was released on June 26, 2007. 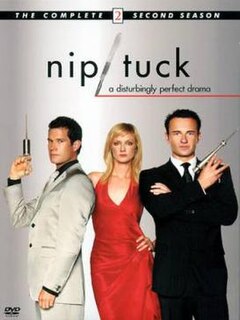 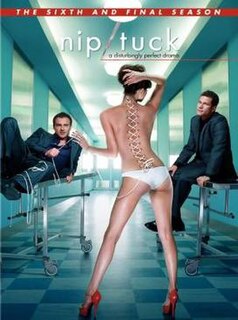 The sixth and final season of Nip/Tuck premiered on October 14, 2009 and concluded on March 3, 2010. Though a seventh season was originally set to air in 2011, the remaining nine episodes were merged into the sixth season.

The second season of The Walking Dead, an American post-apocalyptic horror television series on AMC, premiered on October 16, 2011, and concluded on March 18, 2012, consisting of 13 episodes. Developed for television by Frank Darabont, the series is based on the eponymous series of comic books by Robert Kirkman, Tony Moore, and Charlie Adlard. It was executive produced by Darabont, Kirkman, Glen Mazzara, David Alpert, and Gale Anne Hurd, with Mazzara assuming the role of showrunner after Darabont's departure from the series. 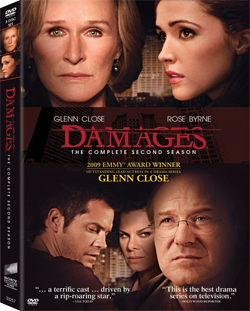 The second season of the FX legal drama series Damages premiered on January 7, 2009 and concluded on April 1, 2009. It consisted of thirteen episodes, bringing the series total to 26. Damages was created by brothers Todd and Glenn Kessler along with Daniel Zelman, each of whom served as executive producers and contributed seven scripts for the season, including the premiere and the finale.

The first season of the FX legal drama series Damages premiered on July 24, 2007 and concluded on October 23, 2007. It consisted of thirteen episodes. Damages was created by brothers Todd and Glenn Kessler along with Daniel Zelman, each of whom served as executive producers and contributed seven scripts for the season, including the premiere and the finale. 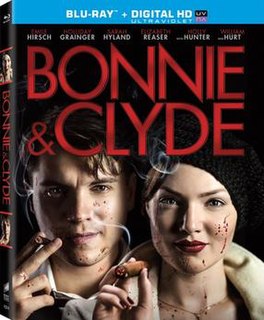 Bonnie & Clyde is a revisionist 2013 miniseries about Great Depression-era outlaws Bonnie Parker and Clyde Barrow starring Emile Hirsch as Clyde Barrow and Holliday Grainger as Bonnie Parker. The two-part series aired on consecutive nights, December 8 and 9, 2013, simultaneously on A&E, History, and Lifetime. The first previews were released on September 23, 2013. The series was widely criticized for its historical inaccuracies, particularly as it was aired on History.