A gram panchayat or village panchayat is the only grassroots-level of panchayati raj formalised local self-governance system in India at the village or small-town level, and has a sarpanch as its elected head.

KU Projects Pvt Ltd. will set up a 1,320 MW (2X660MW) coal fired supercritical thermal power plant at Pitamahul, and Tebhapadar region with a total investment of ₹ 7260 crore. A MoU was already signed between the company and the Odisha government.

Tebhapadar is a village of Birmaharajpur subdivision of Subarnapur district of Odisha, India. It is located on the bank of Surubalijora and Mahanadi River. Total population of this village is 1,326 out of which 697 are male and 629 are female. This village is spread over 755.673 acres (3.05810 km2) of land.

Essar Energy Plc is an Indian-focused energy company with assets in the existing power and oil and gas businesses. Headquartered in Port Louis, Mauritius and subsidiary of Essar Group, the firm has interests in both the power generation and petroleum industries. In May 2014 the company was acquired by its majority shareholder.

Gariamunda is a village of Pitamahul gram panchayat of Birmaharajpur subdivision, Subarnapur district, Odisha, India. It is located on the side of the road connecting Birmaharajpur and Rairakhol town.

Adani Power Limited is the power business subsidiary of Indian conglomerate Adani Group with head office at Ahmedabad, Gujarat. The company is India’s largest private thermal power producer, with capacity of 12,410 MW Adani Power was ranked as the 73rd largest corporation in India in Fortune India 500 list of 2018. 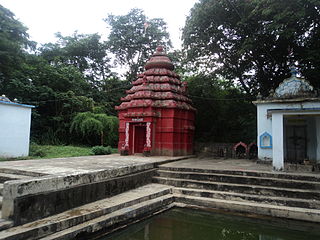 Simhadri Super Thermal Power Plant is a coal-fired power plant located in the outskirts of Visakhapatnam city in the Indian state of Andhra Pradesh. The power plant is one of the coal fired power plants of NTPC, a Government of India enterprise. The coal for the power plant is sourced from Kalinga Block of Talcher Coal fields in Odisha. The plant is a national asset, and power generated is shared between multiple states, as the operator is national. Power generated by units 1 and 2, making up for 1,000 MW, is dedicated to power distribution companies owned by the Government of Andhra Pradesh. The remainder 1,000 MW, generated by units 3 and 4, is allocated to the states of Odisha, Tamil Nadu, and Karnataka. Their shares are decided arbitrarily, with unsold power being sold to Andhra Pradesh.

Bihar State Power Holding Company Limited (BSPHCL), formerly Bihar State Electricity Board (BSEB) is a state-owned electricity regulation board operating within the state of Bihar in India. Bihar State Electricity Board (BSEB) was established in 1958 as a statutory corporation under the Electricity (Supply) Act, 1948. As of November 2012, BSEB has nearly 1,700 officers and 14,850 employees. The derated capacity comes to just 530 MW. The BSEB was unbundeled on August 2, 2011. Power Finance Corporation was the main consultant for BSEB's restructuring.

Bellary Thermal Power station is located in Kudatini Village, Bellary District in the Indian state of Karnataka. Two coal-fired units of 500 MW each are in operation with generating capacity of 12 million units per day and a 700 MW coal-fired unit with operation The thermal electric power generating station is run by KPCL a government of Karnataka undertaking. This electric generating plant is located at Kudatini village on Hosapete - Ballari road.

Mauda Super Thermal Power Station or NTPC Mauda is located at Mauda a Tehsil in Ramtek subdivision of Nagpur district in Nagpur revenue Division in the Berar region in the state of Maharashtra, India. The power plant is one of the coal based power plants of National Thermal Power Corporation. 1000 MW Stage 1 was dedicated to nation by Prime Minister Narendra Modi on 21 August 2014.

Bara Thermal Power Station is an upcoming coal-based thermal power plant located in Bara Tehsil in Allahabad district, Uttar Pradesh. The power plant is owned by Prayagraj Power Generation, a subsidiary of the Jaypee Group. The estimated cost of the project is INR 12,000 crores.

Yermarus Thermal Power Station is a coal-based thermal power plant located in Yermarus village in Raichur district, Karnataka. The power plant is owned by the Karnataka Power Corporation. This is India's first 800MW super critical thermal power plant and Bharat Heavy Electricals is the EPC contractor for this power project.

MPCL Thermal Power Project is located near Angul in Odisha. The power plant is one of the coal based power plants of Monnet Power Company Limited.