A podium (plural podiums or podia) is a platform used to raise something to a short distance above its surroundings. It derives from the Greek πόδι (foot). In architecture a building can rest on a large podium. [1] Podia can also be used to raise people, for instance the conductor of an orchestra stands on a podium as do many public speakers.

Common parlance has shown an increasing use of podium in North American English to describe a lectern. [2] [3] [4] [5]

In sports, a type of podium can be used to honor the top three competitors in events. In the modern Olympics a tri-level podium is used. Traditionally, the highest platform is in the center for the gold medalist. To their right is a lower platform for the silver medalist, and to the left of the gold medalist is a lower platform for the bronze medalist. At the 2016 Rio Summer Olympics, the Silver and Bronze podium places were of equal elevation. In many sports, results in the top three of a competition are often referred to as "podiums" or "podium finishes". In some individual sports, "podiums" is an official statistic, referring to the number of top three results an athlete has achieved over the course of a season or career. The word may also be used, chiefly in the United States, as a verb, "to podium", meaning to attain a podium place. [4]

First use at modern Olympics

Podia were first used at the 1930 British Empire Games (now Commonwealth Games) in Hamilton, Ontario and subsequently during the 1932 Winter Olympics in Lake Placid and the 1932 Summer Olympics in Los Angeles. [6] [7]

The winner stands in the middle, with the second placed driver to their right and the third place driver to their left. Also present are the dignitaries selected by the race organisers who will present the trophies. [8]

In many forms of motorsport, the three top-placed drivers in a race stand on a podium for the trophy ceremony. In an international series, the national anthem of the winning driver, and the winning team or constructor may be played over a public address system and the flags of the drivers' countries are hoisted above them. The recordings are short versions of the national anthems, ensuring the podium ceremony does not exceeded its allocated time. Should a driver experience problems with his car on a slow lap in Formula One, that driver is transported to the pit lane via road car by the Formula One Administration security officer. [8]

Following the presentation of the trophies, the drivers will often spray Champagne over each other and their team members watching below, a tradition started by Dan Gurney following the 1967 24 Hours of Le Mans race. [9] The drivers will generally refrain from spraying champagne if a fatality or major accident occurs during the event. Also, in countries where alcohol sponsorship or drinking is prohibited, alcoholic beverages may be replaced by other drinks, for example rose water. [8] [10]

The term has become common parlance in the media, where a driver may be said to "be heading for a podium finish" or "just missing out on a podium" when he is heading for, or just misses out on a top three finish.

The Monster Energy NASCAR Cup Series, the highest level of stock car racing in the United States, does not use a podium in post-game events or statistics. Instead, the winning team celebrates in victory lane, and top-five and top-ten finishes are recognized statistically. Those finishing second to fifth are required to stop in a media bullpen located on pit lane for interviews.

The INDYCAR Verizon IndyCar Series does not use a podium at either the Indianapolis 500 or at Texas Motor Speedway. The Indy 500 has a long tradition of the winning driver and team celebrating in victory lane, while Texas Motor Speedway president Eddie Gossage has stated that victory lane should be reserved for the winner of the race. [11] However, the series does use a podium at all other races, particularly road course events.

Architectural podiums consist of a projecting base or pedestal at ground level, and they have been used since ancient times. Originally sometimes only meters tall, architectural podiums have become more prominent in buildings over time, as illustrated in the gallery. 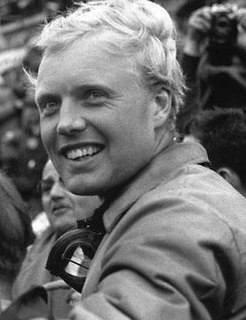 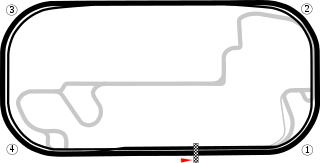 The Indianapolis 500, also formally known as the Indianapolis 500-Mile Race, or simply the Indy 500, is an annual automobile race held at Indianapolis Motor Speedway (IMS) in Speedway, Indiana, United States, an enclave suburb of Indianapolis, Indiana. The event is traditionally held over Memorial Day weekend in late May. It is contested as part of the IndyCar Series, the top level of American Championship Car racing, an open-wheel, open-cockpit formula colloquially known as "Indy Car Racing". The track itself is nicknamed the "Brickyard", as the racing surface was paved in brick in the fall of 1909, with a yard of brick remaining exposed at the start/finish line. 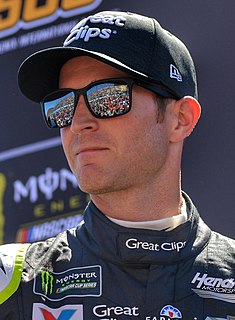 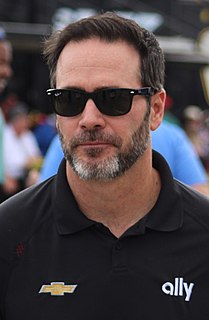 Jimmie Kenneth Johnson is an American professional stock car racing driver. A seven-time champion in the NASCAR Cup Series, he currently competes full-time in the series, driving the No. 48 Chevrolet Camaro ZL1 1LE for Hendrick Motorsports.

Roy Francesco Salvadori was a British racing driver and team manager. He was born in Dovercourt, Essex, to parents of Italian descent. He graduated to Formula One by 1952 and competed regularly until 1962 for a succession of teams including Cooper, Vanwall, BRM, Aston Martin and Connaught. Also a competitor in other formulae, he won the 1959 24 Heures du Mans in an Aston Martin with co-driver Carroll Shelby. 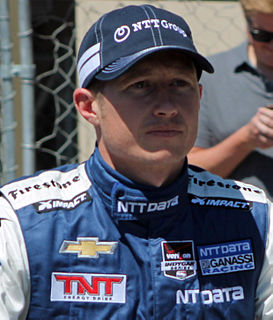 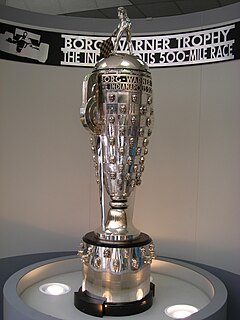 The Borg-Warner Trophy is the trophy presented to the winner of the Indianapolis 500. It is named for and was commissioned by automotive supplier BorgWarner. It is permanently housed at the Indianapolis Motor Speedway Museum in Speedway, Indiana. Unveiled at a 1936 dinner hosted by then-Speedway owner Eddie Rickenbacker, the trophy was officially declared the annual prize for Indianapolis 500 victors. It was first presented at the 24th annual 500-mile race, where Louis Meyer, that year's champion and its first recipient, soon thereafter remarked, "Winning the Borg-Warner Trophy is like winning an Olympic medal." 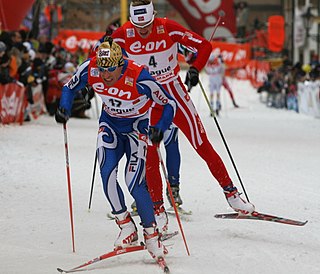 John Randal "J.R." Hildebrand Jr. is an American race car driver. He currently competes in the IndyCar Series for Dreyer & Reinbold Racing. Hildebrand won the 2009 Indy Lights championship, and came close to winning the 2011 Indianapolis 500, hitting the wall on the final corner of the race and crossing the line in second place.

The 1985 CART PPG Indy Car World Series season was the 7th national championship season of American open wheel racing sanctioned by CART. The season consisted of 15 races. Al Unser was the national champion, and the rookie of the year was Arie Luyendyk. The 1985 Indianapolis 500 was sanctioned by USAC, but counted towards the CART points championship. Danny Sullivan won the Indy 500, in dramatic fashion, a race that became known as the "Spin and Win." 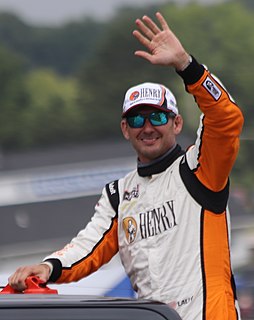 Andrew "Andy" Lally is an American professional sports car and stock car racing driver as well as a street Luge racer. He currently competes full-time in the WeatherTech SportsCar Championship, driving the Audi R8 for Magnus Racing, and part-time in the NASCAR Xfinity Series, driving the No. 02 Chevrolet Camaro for Our Motorsports.

Dane Cameron is an American racing driver from Glen Ellen, California. He won the IMSA SportsCar Championship overall in 2016 and 2019, and also in the GTD class in 2014.

Tom Ingram is a British racing driver, currently racing in the British Touring Car Championship. Having won the Ginetta Junior Championship in 2010 and the G50 class of the Ginetta GT Supercup in 2011, Ingram was named a British Racing Drivers' Club Rising Star in 2011. He won his first BTCC race in Round one of the 2016 season at Brands Hatch.

Colton Herta is an American open-wheel racing driver, and the son of IndyCar and Champ Car driver Bryan Herta. He is the youngest person to ever win an IndyCar Series race.