Podravina (in Croatian) or Podravje (in Slovenian) are Slavic names for the Drava river basin in Croatia and Slovenia.

Between 1929 and 1941 a province of the Kingdom of Yugoslavia known as the Drava Banovina (Drava province) existed in the area with its capital in Ljubljana. The Drava Banovina comprised most of present-day Slovenia.

Today, one of the counties in Croatia is named Virovitica-Podravina.

Major cities and towns along the river

Cities and towns in Slovenia:

Cities and towns in Croatia:

The state route D2 connects all Croatian towns in Podravina. 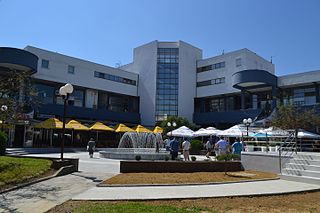 Slatina is a town in the Slavonia region of Croatia. It is located in the Virovitica-Podravina County, at the contact of the Drava valley and the foothills of Papuk mountain, in the central part of the region of Podravina, 29 km (18 mi) southeast of Virovitica; elevation 127 metres. It was ruled by Ottoman Empire between 1542 and 1687, when it was captured by Austrian troops. During Ottoman rule it was initially part of Sanjak of Pojega between 1542 and 1601, latterly part of Sanjak of Rahoviçe between 1601 and 1687. It was district centre at Virovitica County in Kingdom of Croatia-Slavonia between 1868 and 1918. 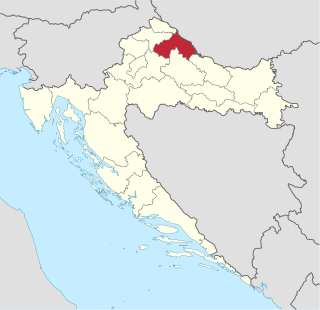 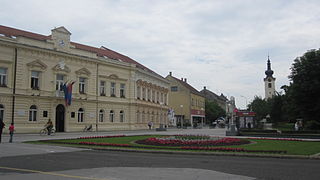 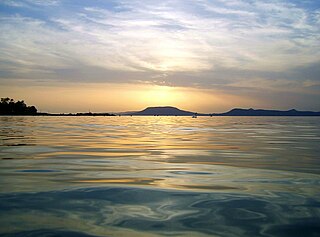 Horvat is the most frequent surname in Croatia and Slovakia, 2nd most frequent in Slovenia and 5th most frequent surname in Hungary. The surname originates in Croatia, Horvat being the older version of the word Hrvat, an autonym used by Croats. In Croatia, majority of Croats with surname Horvat live in the Kajkavian dialect region in Croatia proper. According to the 2011 census, it's the most common last name in the city of Zagreb, Zagreb County Krapina-Zagorje County, Varaždin County, Koprivnica-Križevci County, Bjelovar-Bilogora County, and Virovitica-Podravina County. Apart from them, there is a certain number of ethnic Serbs with surname Horvat inside Baranja region of Croatia. Almost half of the citizens of Slovenia that have the surname Horvat live in the Prekmurje region, where it is the most common surname by far. It is also common in Lower Styria and in Ljubljana, while it is very rare in western Slovenia. 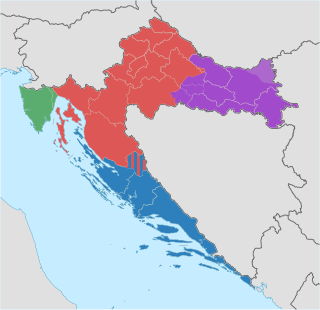 The Republic of Croatia is administratively organised into twenty counties, and is also traditionally divided into four historical and cultural regions: Croatia proper, Dalmatia, Slavonia, and Istria. These are further divided into other, smaller regions.

Čađavica is a village and municipality in Croatia in the Virovitica–Podravina County. It has a population of 2,009, of which 90% are Croats. It is situated 14 kilometers NE of Slatina. Until 1920 it was an integral part of Hungary.

Nova Bukovica is a village and municipality in Croatia in the Virovitica–Podravina County. It has a population of 1,771, 85% of which are Croats.

The Danube–Drava–Sava Euroregion is a Euroregion comprising areas of the countries of Bosnia and Herzegovina, Croatia and Hungary. It was established in 1998. The president of the organization is Ferenc Kékes.

Bilogora is a low mountainous range in central Croatia. It consists of a series of hills and small plains some 80 kilometres in length stretching in the direction northwest-southeast, along the southwest part of the Podravina region. The highest peak is called Rajčevica, located in the north of the mountain. 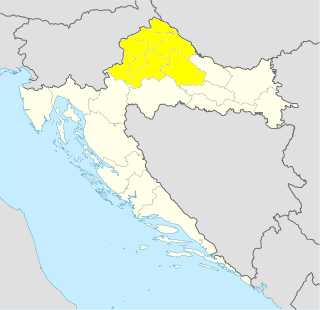 Northern Croatia or North Croatia is a region in the northern part of Croatia, which encompasses Varaždin, Međimurje, Zagorje and Koprivnica-Križevci counties, including the cities of Varaždin, Čakovec, Krapina, Koprivnica and Križevci. The Kajkavian dialect is spoken there. It shares borders with Hungary and Slovenia.