The Premier Academy League (sometimes abbreviated as FAPAL) was the top level of youth football in England before it was to be replaced by a new league proposed by the Elite Player Performance Plan in 2012, which was accepted by the 72 member clubs of The Football League on 20 October 2011. This newly formed league was established in the 2015–2016 season and given the renamed title of the Professional Development League [1] It was contested between the Academy sides of the Premier League and some Football League clubs. It sat above the second tier of youth football, The Football League Youth Alliance, which is for the remaining Football League clubs and some Football Conference clubs with a Centre of Excellence. The most successful team is Arsenal, having won 5 titles.

The league was founded as the FA Premier Youth League in 1997, replacing regionally based youth leagues such as the South East Counties League as the top level of youth football. Clubs fielded Under-18 teams, with up to three Under-19 players allowed per match. 16 teams were split into Northern and Southern conferences of 8 teams each; teams played others within their own conference twice and teams from the other conference once. At the end of the season all the teams were paired into rounds of play-offs played over two legs in a knockout system. The inaugural winners were Arsenal, who beat Tottenham Hotspur 2–1 on aggregate in the final.

The competition was revamped in 1998 with the introduction of the Football Association's Academy system and renamed the Premier Academy League. The competition was divided into Under-19 and Under-17 sections, and more teams were admitted - 32 in total, split into four conferences (two Southern, two Northern) of eight teams each. Teams played those within their own conference twice and the team from the other conference in their region once, again with play-offs between all teams at the end.

The league was reorganised yet again in 2004–05 season, with the league being reformed as a single Under-18 competition (players are aged under 18 on the preceding 31 August), with up to 3 Under-19 outfield players and 1 Under-19 goalkeeper allowed per team per match. Teams also competed at an Under-16 level in identically formed groups, but these were played as friendlies – no league table was maintained and no play-offs were contested. This format remained until the league's abandonment in 2012.

All teams played each other in the group twice and played 10 inter-group fixtures, producing 28 games a season. The four group winners entered the playoffs, which was a straight knockout format. Unlike the Premier Reserve League, the Premier Academy League was open to more than just the Premier League clubs.

Everton Football Club is an English professional football club based in Liverpool that competes in the Premier League, the top tier of English football. The club has competed in the top division for a record 117 seasons, missing only four top-flight seasons since the creation of the Football League, of which it was a founding member. Everton are the second-longest continuous serving club in English top flight football and has won nine league titles, five FA Cups, one European Cup Winners' Cup and nine Charity Shields.

John Gijsbert Alan Heitinga is a Dutch football coach and a former player who played as a centre back. He currently manages the Ajax U19 squad.

Gaël Dimitri Clichy is a French professional footballer who plays for Swiss Super League club Servette and formerly for the France national team. He primarily plays as a left-back, being also capable of playing as an offensive-minded wing-back. He is predominantly left footed, but naturally right footed. Earlier in his career, he was described as a player who possesses "almost unrivaled stamina" that is "quick in the tackle and willing to drive forward". 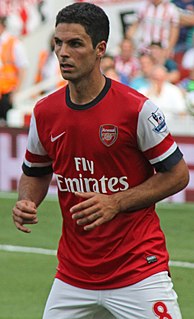 Kevin Joseph Campbell is an English former professional footballer. Campbell, who played as a striker, featured in the Premier League for Arsenal, Nottingham Forest, Everton and West Bromwich Albion.

Leighton John Baines is an English former professional footballer who played as a left back.

Vassiriki Abou Diaby, known as Abou Diaby, is a French former professional footballer. He played primarily in a box to box role, adept at both attacking and defending. Described as a player who was "languid, elusive, and athletic" that could either "dribble past opponents or slip passes to team-mates". Of Ivorian descent, Diaby also possessed "superb touch" and "excellent close control". Diaby's career was hampered by numerous repetitive injuries, a problem that existed from his time in France. His physical appearance and positional preference evoked comparisons to Arsenal legend and compatriot Patrick Vieira.

Scott Brown is an English professional footballer who plays as a central midfielder for League Two club Harrogate Town. He has played in the English Football League for Bristol City, Cheltenham Town, Port Vale, Morecambe and Accrington Stanley. 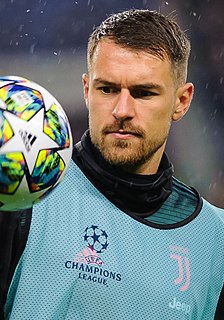 Aaron James Ramsey is a Welsh professional footballer who plays as a midfielder for Serie A club Juventus and the Wales national team. Ramsey mainly plays as a box-to-box midfielder, but has also been deployed on the left and right wings. He played as a schoolboy for Cardiff City, where he spent eight years in youth football, became the club's youngest ever first team player, and made 28 appearances for the senior team – including the 2008 FA Cup Final. 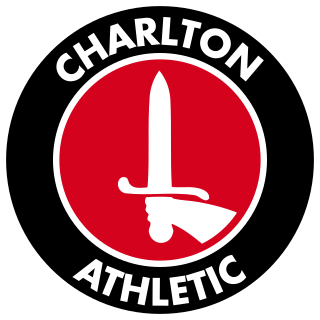 The Charlton Athletic Academy refers to the teams and players in the youth system of English professional football club Charlton Athletic F.C.; they play the majority of their home games at the club's training ground in New Eltham, London.

Jack Andrew Garry Wilshere is an English professional footballer who plays as midfielder for Championship side AFC Bournemouth. 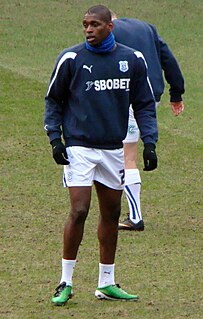 Jay Aston Emmanuel-Thomas is an English footballer who plays as a forward for Scottish Premiership club Livingston. A product of the Arsenal Academy, he is a versatile forward and can play as a winger or striker.

Natasha Khalila Dowie is an English footballer who plays as a striker for Italian Serie A club AC Milan. She represented the England women's national football team at the youth level before making her senior international debut in 2009. Dowie played for the London teams Watford, Fulham and Charlton Athletic, and then spent five years with Everton before transferring to FA WSL clubs Liverpool Ladies in November 2012 and Doncaster Rovers Belles in 2016. She also spent three periods on loan with Melbourne Victory of the Australian W-League in 2015, 2016, and 2017 and played for Boston Breakers in the National Women's Soccer League (NWSL) in 2016 and 2017.

Shkodran Mustafi is a German professional footballer who plays as a centre-back for English Premier League club Arsenal and the Germany national team.

Dominic Nathaniel Calvert-Lewin is an English professional footballer who plays as a striker for Premier League club Everton and the England national team.