Proclamation Day is the name of official or unofficial holidays or other anniversaries which commemorate or mark an important proclamation. In some cases it may be the day of, or the anniversary of, the proclamation of a monarch's accession to the throne. A proclamation day may also celebrate the independence of a country, the end of a war, or the ratification of an important treaty.

Proclamation Day in South Australia celebrates the establishment of government in South Australia as a British province. The province itself was officially created and proclaimed in 1834 when the British Parliament passed the South Australia Act, which empowered King William IV to create South Australia as a British province and to provide for its colonisation and government. It was ratified 19 February 1836 when King William issued Letters Patent establishing the province. [1] The proclamation announcing the establishment of Government was made by Captain John Hindmarsh beside The Old Gum Tree at the present-day suburb of Glenelg North on 28 December 1836. The proclamation specified the same protection under the law for the local native population as for the settlers. [2]

The proclamation was drafted aboard HMS Buffalo (1813) by Hindmarsh's private secretary, George Stevenson, and printed by Robert Thomas (1782–1860), who came from England with his family on Africaine, arriving at Holdfast Bay on 8 November 1836. Thomas brought with him the first printing press to reach South Australia. The press was a Stanhope Invenit No. 200, [3] and was on display in the State Library until 2001. It may be surmised[ by whom? ] that, from the quilled text of the proclamation provided to him by the officials, it was Thomas himself who made a more striking layout for print, later most familiar to the public.[ citation needed ]

It was signed by the Colonial Secretary, Robert Gouger, who had also travelled on the Africaine. [4]

Text of the Proclamation

By His Excellency John Hindmarsh, Knight of the Royal Hanoverian Guelphic Order, Governor and Commander-in-Chief of His Majesty’s Province of South Australia.

In announcing to the Colonists of His Majesty’s Province of South Australia, the establishment of the Government, I hereby call upon them to conduct themselves on all occasions with order and quietness, duly to respect the laws, and by a course of industry and sobriety, by the practice of sound morality and a strict observance of the Ordinances of Religion, to prove themselves worthy to be the Founders of a great and free Colony.

It is also, at this time especially, my duty to apprize the Colonists of my resolution, to take every lawful means for extending the same protection to the Native Population as to the rest of His Majesty’s Subjects and of my firm determination to punish with exemplary severity, all acts of violence or injustice which may in any manner be practiced or attempted against the Natives who are to be considered as much under the Safeguard of the law as the Colonists themselves, and equally entitled to the privileges of British Subjects. I trust therefore, with confidence to the exercise of moderation and forbearance by all Classes, in their intercourse with the Native Inhabitants, and that they will omit no opportunity of assisting me to fulfil His Majesty’s most gracious and benevolent intentions toward them, by promoting their advancement in civilization, and ultimately, under the blessing of Divine Providence, their conversion to the Christian Faith.

The colonising fleet prior to Buffalo consisted of 8 vessels which had first arrived at Nepean Bay on Kangaroo Island before being directed to Holdfast Bay on the mainland. The first vessel to arrive at Nepean Bay was Duke of York on 27 July 1836 which did not proceed to Holdfast Bay but instead set off on a whaling expedition. [5] Africaine [6] was the seventh to arrive at Nepean Bay (4 Nov 1836), discharging settlers at Holdfast Bay on 9 November 1836. Seven of these earlier ships preceded Governor John Hindmarsh on Buffalo to enable preparations in advance of his formal arrival on 28 December.[ citation needed ]

Thomas's wife Mary (1787–1875) published The Diary of Mary Thomas, [7] in which she described the journey on Africaine and the early years in South Australia. An extract from the diary reads:

About December 20th 1836, we built a rush hut a short distance from our tents for the better accommodation of part of our family... and in this place (about 12 feet square) the first printing in South Australia was produced.

One of the children of Robert and Mary Thomas was a surveyor who assisted Colonel William Light in the survey which led to the founding of the City of Adelaide.[ citation needed ]

In 1876 Parliament decreed that the Proclamation Day holiday, a gala occasion when thousands descended on Glenelg, [8] would henceforth be celebrated on 27 December in lieu of the 28th, in order to make a three-day Christmas holiday. H. J Moseley, proprietor of the Glenelg's Pier Hotel, was the first and loudest protester against the move [9] which was rescinded.[ citation needed ]

The Proclamation Day public holiday is prescribed in the South Australian Holidays Act, 1910. [10] Originally the Act provided that the day was to be observed on the 28th December, except when that day occurred on a Saturday or Sunday, at which times it was to be celebrated on the following Monday. On 4 November 1993, [11] the Holidays Act, 1910 was amended by the Holidays (Proclamation Day, Australia Day and Bank Holidays) Amendment Act 1993, [12] changing the date for observance of the day to the day following the Christmas Day holiday. The change was made primarily as a response to the recommendations of the South Australian Industrial Relations Advisory Council, which had advised that the holiday should be changed to avoid stop/start work patterns, particularly in the retail industry. [13] The change was also said to be consistent with national uniformity arrangements in relation to certain public holidays. [14]

Formal ceremonies involving the most senior current officials and politicians, followed by public celebrations, continue to be held at the still-extant Old Gum Tree at Glenelg North on 28 December, [15] or one day earlier on 27 December in some years. [16] [17]

Proclamation Day also refers to 21 October 1890, the day that Western Australia achieved self-government, with its own constitution and self-elected parliament. [18] [19] [20]

Proclamation Day was originally a public holiday, but its significance was overshadowed by the celebrations of the Eight Hours Day, which were held on the same day, and by 1919 the public holiday had been replaced by Labour Day. [21]

William Light, also known as Colonel Light, was a British-Malayan naval and army officer. He was the first Surveyor-General of the new British Province of South Australia, known for choosing the site of the colony's capital, Adelaide, and for designing the layout of its streets, six city squares, gardens and the figure-eight Adelaide Park Lands, in a plan later sometimes referred to as Light's Vision.

The Old Gum Tree is a historic site in Glenelg North, South Australia. Near this tree on 28 December 1836, the British governor John Hindmarsh delivered the proclamation announcing the establishment of Government of the colony of South Australia. A ceremony is held each year at the site on Proclamation Day, with the current Governor reading out Hindmarsh's original speech.

Glenelg is a beach-side suburb of the South Australian capital of Adelaide. Located on the shore of Holdfast Bay in Gulf St Vincent, it has become a tourist destination due to its beach and many attractions, home to several hotels and dozens of restaurants.

This article details the History of Adelaide from the first human activity in the region to the 20th century. Adelaide is a planned city founded in 1836 and the capital of South Australia. 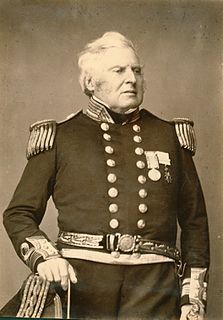 Rear-Admiral Sir John Hindmarsh KH was a naval officer and the first Governor of South Australia, from December 28, 1836 to July 16, 1838.

The South Australia Act 1834, or Foundation Act 1834, 4 & 5 Wm. IV, c. 95, are short titles of an Act of the Parliament of the United Kingdom, passed on 15 August 1834, with the long title "An Act to empower His Majesty to erect South Australia into a British Province or Provinces and to provide for the Colonization and Government thereof". 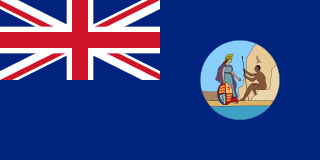 Moseley Square is a public square in the City of Holdfast Bay at Glenelg, and was named for Henry J. Moseley, the builder and first publican of the Pier Hotel, Glenelg. Located between Jetty Road and Glenelg Beach, the Square is the location of the Glenelg Town Hall, Glenelg Jetty, the Stamford Grand Hotel and various fast-food outlets. It is the terminus of the Glenelg tram line from Adelaide. It is a site of major events including the Glenelg Jazz Festival and the City to Bay Fun Run.

The Holdfast Bay is a small bay in Gulf St Vincent, next to Adelaide, South Australia. Along its shores lie the local government area of the City of Holdfast Bay and the suburbs of Glenelg and Glenelg North

The Patawalonga River is a river located in the western suburbs of the Adelaide metropolitan area, in the Australian state of South Australia. It drains an area of flat, swampy lands formerly known as the Cowandilla Plains or The Reedbeds, which in the mid-20th century were drained by engineering works, enabling the establishment of Adelaide Airport and the development of residential housing.

Mary Thomas née Harris was a diarist, poet and early settler of South Australia. She married Robert Thomas on 8 January 1818 in Southampton. They had six children, one of whom died young.

John Finlay Duff was a ship's captain and businessman in the Colony of South Australia.

In 1836, at least nine ships in 1836 carried the first European settlers from England to the south coast of Australia for the establishment of the City of Adelaide and the province of South Australia. Although not all of the ships sailed together, they have been referred to as the "First Fleet of South Australia", as all were carrying the founding planners and administrators of the new colony as well as the first emigrants, and all were represented at the proclamation of the new province.

William Williams was an early settler in the Province of South Australia, known for establishing the Walkerville Brewery and for his work on the Kaurna language. He was Deputy Colonial Storekeeper for some time.