Old World quail are placed in the family Phasianidae, and New World quail are placed in the family Odontophoridae. The species of buttonquail are named for their superficial resemblance to quail, and form the family Turnicidae in the order Charadriiformes. The king quail, an Old World quail, often is sold in the pet trade, and within this trade is commonly, though mistakenly, referred to as a "button quail". Many of the common larger species are farm-raised for table food or egg consumption, and are hunted on game farms or in the wild, where they may be released to supplement the wild population, or extend into areas outside their natural range. In 2007, 40 million quail were produced in the U.S. [1]

Quail that have fed on hemlock (e.g., during migration) may induce acute renal failure due to accumulation of toxic substances from the hemlock in the meat; this problem is referred to as "coturnism". [5] 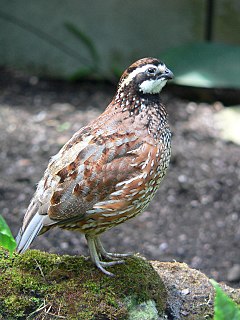 The northern bobwhite, Virginia quail or bobwhite quail is a ground-dwelling bird native to Canada, the United States, Mexico, and the Caribbean. It is a member of the group of species known as New World quails (Odontophoridae). They were initially placed with the Old World quails in the pheasant family (Phasianidae), but are not particularly closely related. The name "bobwhite" derives from its characteristic whistling call. Despite its secretive nature, the northern bobwhite is one of the most familiar quails in eastern North America because it is frequently the only quail in its range. Habitat degradation has likely contributed to the northern bobwhite population in eastern North America declining by roughly 85% from 1966-2014. This population decline is apparently range-wide and continuing.

Galliformes is an order of heavy-bodied ground-feeding birds that includes turkey, grouse, chicken, New World quail and Old World quail, ptarmigan, partridge, pheasant, francolin, junglefowl and the Cracidae. The name derives from "gallus", Latin for "cock" or "rooster". Common names are gamefowl or gamebirds, landfowl, gallinaceous birds, or galliforms. "Wildfowl" or just "fowl" are also often used for the Galliformes, but usually these terms also refer to waterfowl (Anseriformes), and occasionally to other commonly hunted birds. This group has about 290 species, one or more of which are found in essentially every part of the world's continents. They are rarer on islands, and in contrast to the closely related waterfowl, are essentially absent from oceanic islands—unless introduced there by humans. Several species have been domesticated during their long and extensive relationships with humans.

The Sibley-Monroe checklist was a study of birds conducted by Charles Sibley and Burt Monroe. It drew on extensive DNA-DNA hybridisation studies to reassess the relationships between modern birds.

The Phasianidae are a family of heavy, ground-living birds, which includes pheasants, partridges, junglefowl, chickens, turkeys, Old World quail, and peafowl. The family includes many of the most popular gamebirds. The family is a large one, and is occasionally broken up into two subfamilies, the Phasianinae and the Perdicinae. Sometimes, additional families and birds are treated as part of this family. For example, the American Ornithologists' Union includes the Tetraonidae (grouse), Numididae (guineafowl), and Meleagrididae (turkeys) as subfamilies in Phasianidae.

The New World quails or Odontophoridae are small birds only distantly related to the Old World quail, but named for their similar appearance and habits. The American species are in their own family Odontophoridae, whereas Old World quail are in the pheasant family Phasianidae. The family ranges from Canada through to southern Brazil, and two species, the California quail and the bobwhite quail, have been successfully introduced to New Zealand. The stone partridge and Nahan's partridge, both found in Africa, seem to belong to the family. Species are found across a variety of habitats from tropical rainforest to deserts, although few species are capable of surviving at very low temperatures. Thirty-four species are placed in ten genera.

Alectoris is a genus of partridges in the family Phasianidae, closely related to Old World quail, snowcocks (Tetraogallus), partridge-francolins (Pternistis), bush quail (Perdicula), and sand and see-see partridges (Ammoperdix). Members of the genus are known collectively as rock partridges. The genus name is from Ancient Greek: αλέκτωρ, romanized: alektor, rooster. 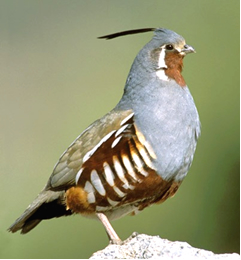 The mountain quail is a small ground-dwelling bird in the New World quail family. This species is the only one in the genus Oreortyx, which is sometimes included in Callipepla. This is not appropriate, however, as the mountain quail's ancestors have diverged from other New World quails earlier than the bobwhites, no later than 6 mya.

The brown quail, also known as the swamp quail, silver quail and Tasmanian quail, is an Australasian true quail of the family Phasianidae. It is a small, ground-dwelling bird and is native to mainland Australia, Tasmania and Papua New Guinea and has been introduced to New Zealand and Fiji. Widespread and common throughout its large range, the brown quail is evaluated as being of "least concern" by the International Union for Conservation of Nature on the IUCN Red List of Threatened Species. The Kunwinjku of western Arnhem Land call this bird Djiribidj or Djirridih, or Meme

The spot-bellied bobwhite is a ground-dwelling bird in the New World quail family. It is sometimes considered to be conspecific with the crested bobwhite, Colinus cristatus. As the latter species expands north into Costa Rica, it is likely that the two species will overlap in range in the future, but the Costa Rican subspecies of the spot-bellied is the least similar to the crested. 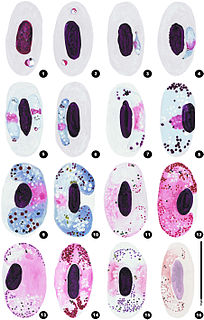 Haemoproteus is a genus of alveolates that are parasitic in birds, reptiles and amphibians. Its name is derived from Greek: Haima, "blood", and Proteus, a sea god who had the power of assuming different shapes. The name Haemoproteus was first used in the description of Haemoproteus columbae in the blood of the pigeon Columba livia by Kruse in 1890. This was also the first description of this genus. Two other genera — Halteridium and Simondia — are now considered to be synonyms of Haemoproteus.

Perdicinae is a subfamily of birds in the pheasant family, Phasianidae, regrouping the partridges, Old World quails, and francolins. Although this subfamily was considered monophyletic and separated from the pheasants, tragopans, junglefowls, and peafowls (Phasianinae) till the early 1990s, molecular phylogenies have shown that these two subfamilies actually constitute only one lineage. For example, some partridges are more closely affiliated to pheasants, whereas Old World quails and partridges from the Alectoris genus are closer to junglefowls.

Old World quail is a collective name for several genera of mid-sized birds in the pheasant family Phasianidae.

A domesticated quail is a domestic form of the quail, a collective name which refers to a group of several small species of fowl. Thousands of years of breeding and domestication have guided the bird's evolution. Humans domesticated quail for its meat and egg production; additionally, quail can be kept as pets. Domesticated quail are commonly kept in long wire cages and are fed game bird feed. The most common domesticated type is the Coturnix quail. Quail live on the ground, and rarely fly unless forced to do so.