The Rugby Football League Women's Super League (known as the Betfred Women's Super League due to sponsorship) is the elite women's rugby league club competition in England. Originally competed between four teams in the 2017 season, [1] the league has developed with the 2021 season being contested by 10 teams playing home and away against each other with subsequent play-offs and a grand final.

The first women's competition that was set up was the Women's Rugby League Championship, set up in 2014. It was mostly made up of community clubs with only Hunslet, Featherstone Rovers and Rochdale Hornets being professional clubs with a women's team. The league had a very low profile and only ran for three years until the Women's Super League was formed in 2017.

To give the sport a bigger profile, the Super League name used by the men's game was adopted in 2017. The new league was still made up of community clubs but more professional clubs entered a women's team, notably Bradford Bulls took over the Bradford Thunderbirds team. The four founding clubs were Bradford Bulls, Castleford Tigers, Featherstone Rovers and Thatto Heath Crusaders.

The league expanded the following year with Leeds, York and Wigan joining while St. Helens took over from Thatto Heath Crusaders. The league was expanded again to eight clubs for 2019 with the addition of Wakefield Trinity Ladies. [2]

The league continued to grow with Warrington Wolves and Huddersfield Giants joining from the Championship for the 2020 season. [3] The structure was also slightly changed with the addition of the Shield Final for the bottom six clubs to play for.

Until 2019 the league was played with each team playing all the others home and away. At the end of the regular season, the top four teams played two semi-finals with the winners meeting in the grand final.

For 2021 a new structure was introduced. The ten teams play each other once, home or away over nine rounds. The top five then go into a play-off section where each team plays the others once more. The team finishing top of this play-off section wins the League Leaders Shield. The top four in the play-offs then meet in two semi-finals with the winners of these two game competing in the Grand Final.

The bottom five teams in the regular season enter the Shield competition which follows an identical format to the play-offs, where the winners of the two semi-finals meet in the Shield final.

Three venues have so far hosted the Grand Final. In 2021 the Grand final and the Shield final were played as a double-header.

In rugby league, the term 'the Double' is referring to the achievement of a club that wins the top division and Challenge Cup in the same season.

The Treble refers to the team who wins all three domestic honours on offer during the season; Grand Final, League Leaders' Shield and Challenge Cup. The treble has been achieved twice. Thatto Heath Crusaders were the first when they achieved this feat in 2016 (winning the Women's Rugby League Championship, precursor to the Women's Super League). St Helens became the second team to complete the treble with victory in 2021.

The League Leaders is awarded to the team finishing the regular season top of Super League.

The Woman of Steel is an annual award for the best player of the season in Super League. It was formed in 2018 to become a part of the Man of Steel Awards at the end of the men's Super League season.

In August 2019 a sponsorship deal with bookmakers Betfred was announced to start immediately and which will run until the end of the 2021 season (concurrent with Betfred's sponsorship of Super League). [7]

Featherstone Rovers are a professional rugby league club in Featherstone, West Yorkshire, England, who play in the Championship. Featherstone is a former coal mining town with a population of around 16,000 and Rovers are one of the last "small town teams" which were common in rugby league in the early 20th century. The club has produced many junior players who have gone on to play for Super League clubs. Their local rivals are Castleford and Wakefield Trinity, and in the Championship, Halifax. 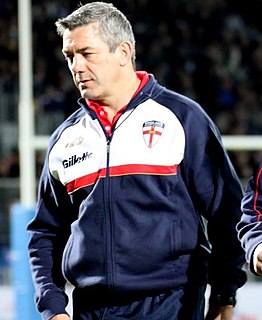 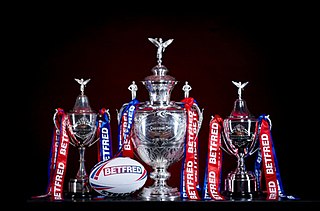 The Super League (SL), sponsored as the Betfred Super League and officially known as Super League Europe, is the top-level of the British rugby league system. At present the league consists of twelve teams, of which ten are from Northern England, reflecting the sport's geographic heartland within the UK, and two from southern France.

Dane Chisholm is a France international rugby league footballer who plays as a scrum-half for Featherstone Rovers in the Betfred Championship.

In British rugby league, winning The Double refers to winning the Super League, the country's highest tier league competition,, and the Challenge Cup in one season. Nine teams have won the double, the first being Broughton Rangers in 1902. Wigan Warriors are the most successful side having won a record 7 doubles.

In British rugby league, winning the treble refers to winning the Super League Grand Final, League Leaders' Shield, and Challenge Cup. Up until 1973 this was achieved by winning the Championship Final as well as finishing top of the league during the regular season, in addition to winning the Challenge Cup. Between 1973 and 1996, following the abolition of the Grand Final, the league leaders were declared season champions. In this era, the Premiership was the third trophy required for the treble. Only six teams have completed the treble, and it has only been achieved three times during the Super League era. Wigan Warriors are the most successful team, winning the treble on 3 occasions. 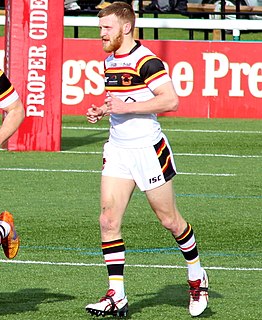 Joseph "Keysie" Keyes is an Ireland international rugby league footballer who plays as a scrum-half and stand-off for the Bradford Bulls in the RFL Championship, on loan from Hull Kingston Rovers in the Betfred Super League.

The 2018 RFL League 1 was a professional rugby league football competition played in England and Wales and is the third tier of the sport for Rugby Football League (RFL) affiliated clubs.

The 2018 Rugby Football League Championship is a rugby league football competition played primarily in the United Kingdom, one tier below the first tier Super League. The 2018 season is the fourth to consist of the Super 8s structure combining the Championship and Super League three-quarters of the way through the season.

The 2018 RFL Women's Super League was the second season of the rugby league Women's Super League for female players in clubs affiliated to the Rugby Football League. The grand final was won by Wigan Warriors Women, who beat Leeds Rhinos Women 18–16 at the Grand Final at the Manchester Regional Arena. Wigan finished second to League Leaders Shield winners Leeds in the regular season.

The 2019 Rugby Football League Championship was a rugby league football competition played primarily in England but including teams from Canada and France. It is the second tier of the three tiers of professional rugby league in England, below Super League and above League 1. Following rule changes agreed at the end of the 2018 season, the Super 8's format has been abandoned and the Championship will feature a play-off system leading to promotion to Super League for one club while results during the regular season will lead to relegation to League 1 for two teams.

The 2017 Women's Super League was the inaugural season of the top level rugby league competition for women in England. Run by the Rugby Football League there were four teams in the league; three associated with professional clubs in West Yorkshire and one associated with a leading amateur club in Lancashire.

Jodie Cunningham is an English rugby league player who plays at international level for England and domestically for St Helens in the Women's Super League. Cunningham plays at fullback or loose forward.