The Rainbow Bridge was built near the site of the earlier Honeymoon Bridge, which collapsed on January 27, 1938, due to an ice jam in the river. A joint Canadian and American commission had been considering a new bridge to replace it, and the collapse added urgency to the project.[ citation needed ]

A design by architect Richard (Su Min) Lee was chosen (and used again for the Lewiston-Queenston Bridge, approximately 10 kilometres (6 mi) downriver). The bridge's Rainbow Tower and Canadian plaza are the work of Canadian architect William Lyon Somerville. [3] King George VI and Queen Elizabeth, during their visit to Niagara Falls as part of the 1939 royal tour of Canada, dedicated the site of the Rainbow Bridge; a monument was erected to commemorate the occasion. Construction began in May 1940. The bridge officially opened on November 1, 1941.[ citation needed ]

The origin of the bridge's name is unknown, with one possible source being T. B. McQuesten, then chairman of the Niagara Parks Commission. An engraving on the Canadian side of the bridge includes a biblical quote from the Book of Genesis which references a "bow in the clouds." Regardless of its origin, the NRBC used the name as early as March 1939. [4]

The New York State Department of Transportation designates the bridge as NY 955A, an unsigned reference route, while the Ontario Ministry of Transportation designates it as part of Highway 420 (and the original routing of the Queen Elizabeth Way), even though it is separated from the rest of the route by a regional road. On the American side, a number of state and national routes end at a set of intersections in front of the bridge. New York routes 104 and 384, as well as the northern section of the Robert Moses State Parkway, all terminate at the final intersection before the bridge, and none of the designations passes onto the bridge. U.S. Route 62 terminates two blocks north at route 104, which then continues to the bridge. The Rainbow Tower, part of the plaza complex on the Canadian side, houses a large carillon, which plays several times daily.

The bridge permits no commercial trucks; the nearest border crossing for these is the Lewiston-Queenston Bridge. [5]

The toll to cross the bridge for each pedestrian and bicycle is $1.00 US or CAD, and $4.00 US or $5.50 CAD for automobiles as of January 2021. Car tolls are collected when leaving the United States. Pedestrian toll is collected by an automatic turnstile when leaving Canada, payable in U.S. or CAD quarters or $1 CAD 'loonies'. [2] Change machines are available from $1 and $5 US bills and $1 (loonies) and $2 (toonies) Canadian coins.

Panoramic view of the Rainbow Bridge in Niagara Falls which connects U.S (on right) and Canada (on left). 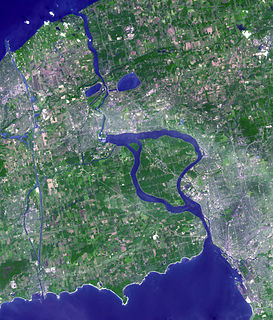 E‑ZPass is an electronic toll collection system used on most tolled roads, bridges, and tunnels in the Midwestern and Eastern United States, as far south as Florida and as far west as Illinois. The E-ZPass Interagency Group (IAG) consists of 39 member agencies in operation within 17 states, which use the same technology and allow travelers to use the same transponder on toll roads throughout the network. Since its creation in 1987, various independent systems that use the same technology have been folded into the E-ZPass system, including the I-Pass in Illinois and the NC Quick Pass in North Carolina. Negotiations are ongoing for nationwide interoperability in the United States.

Queenston is a compact rural community and unincorporated place 5 kilometres (3.1 mi) north of Niagara Falls in the Town of Niagara-on-the-Lake, Ontario, Canada. It is bordered by Highway 405 to the south and the Niagara River to the east; its location at the eponymous Queenston Heights on the Niagara Escarpment led to the establishment of the Queenston Quarry in the area. Across the river and the Canada–US border is the village of Lewiston, New York. The Lewiston-Queenston Bridge links the two communities. This village is at the point where the Niagara River began eroding the Niagara Escarpment. During the ensuing 12,000 years the Falls cut an 11 kilometres (6.8 mi) long gorge in the Escarpment southward to its present-day position.

The Lewiston–Queenston Bridge, also known as the Queenston–Lewiston Bridge, is an arch bridge that crosses the Niagara River gorge just south of the Niagara Escarpment. The bridge was officially opened on November 1, 1962. It is an international bridge between the United States and Canada. It connects Interstate 190 in the town of Lewiston, New York to Highway 405 in the community of Queenston, Ontario. The Lewiston–Queenston Bridge is a twin of the Rainbow Bridge at Niagara Falls and designed by Richard Lee. 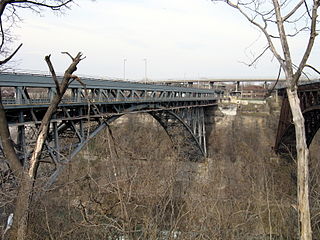 The Whirlpool Rapids Bridge, commonly known as the Whirlpool Bridge or the Lower Steel Arch Bridge, is a spandrel braced, riveted, two-hinged arch bridge. It crosses the international border between Canada and the United States, connecting the commercial downtown districts of Niagara Falls, Ontario and Niagara Falls, New York. This bridge is located approximately 1.5 kilometres (0.9 mi) north of the Rainbow Bridge and about 2 kilometres (1.2 mi) from the Falls. It was acquired by the Niagara Falls Bridge Commission in January 1959. Immediately up stream is the similar arch-style Michigan Central Railway Bridge, which has been out-of-service since 2001. 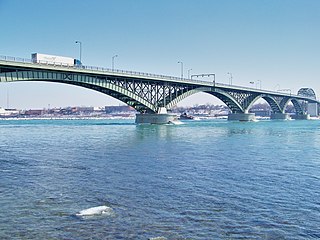 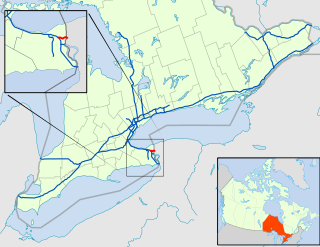 King's Highway 405, also known as Highway 405 and the General Brock Parkway, is a 400-Series Highway in the Canadian province of Ontario connecting the Queen Elizabeth Way (QEW) near St. Catharines with the Lewiston–Queenston Bridge in the village of Queenston. It then crosses the Niagara River, where it encounters the international border with the United States and continues into New York as Interstate 190 (I-190).

King's Highway 420, commonly referred to as Highway 420, is a 400-series highway in the Canadian province of Ontario that connects the Queen Elizabeth Way (QEW) with downtown Niagara Falls. It continues east as a limited-access expressway named Niagara Regional Road 420 to connect with the Rainbow Bridge international crossing between Canada and the United States over the Niagara River; this was part of Highway 420 until 1998. West of the QEW, the freeway ends at an at-grade intersection with Montrose Road. The highway has a speed limit of 80 kilometres per hour (50 mph), making it the only 400-series highway to have a speed limit less than 100 kilometres per hour (62 mph) for its entirety.

The Niagara Falls Bridge Commission is an international public agency which administers three international bridges across the Niagara River connecting the province of Ontario, Canada and the state of New York, United States: the Lewiston–Queenston Bridge, Whirlpool Rapids Bridge and Rainbow Bridge. The NFBC is incorporated as a class D New York State public benefit corporation and is licensed to operate in Ontario under the Extra-Provincial Corporations Act. The commission is based in Lewiston, New York and maintains a post office box address in Niagara Falls, Ontario. It is mostly self-supporting from tolls, leases, and commercial concessions.

The Great Gorge Route or Niagara Belt Line was a trolley belt line encompassing the Niagara Gorge, operated by the International Railway and Niagara Gorge Railroad. Many dignitaries rode this line and they used to use a flat car with search light to illuminate the Niagara Whirlpool at night.

The Niagara Scenic Parkway is an 18.42-mile (29.64 km) long north–south highway in western Niagara County, New York, in the United States. Its southern terminus is at the LaSalle Expressway on the east bank of the Niagara River in Niagara Falls. The northern terminus is at New York State Route 18 (NY 18) at Four Mile Creek State Park in Porter near Lake Ontario. Originally, the parkway was one continuous road; however, due to low usage, a portion of the parkway near Niagara Falls was removed, separating the parkway into two sections. The length of the parkway is designated as New York State Route 957A by the New York State Department of Transportation (NYSDOT). A 1.16-mile (1.87 km) long spur connecting the Niagara Scenic Parkway to Fort Niagara State Park near Youngstown is designated as New York State Route 958A. Both reference route designations are unsigned. 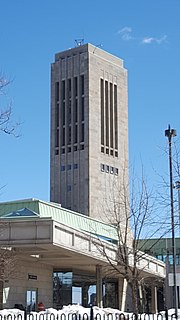 The Rainbow Tower is a 50.3 metres (165 ft) tower located at the Rainbow Plaza Canada–US border station of the Rainbow Bridge in Niagara Falls, Ontario, Canada. Construction on the tower was completed in 1947. The tower, part of the Canadian plaza of the bridge, was designed by Canadian architect William Lyon Somerville.

Niagara International Transportation Technology Coalition (NITTEC) is a road management system used in the Niagara Falls-Buffalo area and involves the co-operation from both Canada and the United States.

The Niagara Clifton Bridge, also known as the first Falls View Suspension Bridge, was a suspension bridge over the Niagara River between Niagara Falls, New York and Clifton, Ontario. It was designed by Samuel Keefer, with construction starting in 1867. It was officially opened for traffic on January 2, 1869 and was destroyed in a storm on the night of January 9, 1889. 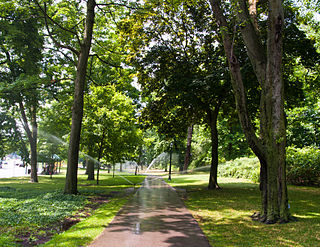 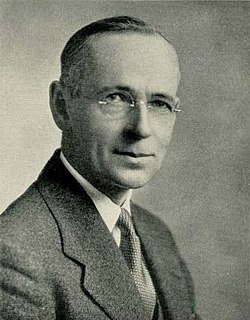 William Lyon Somerville was a Canadian architect practicing in Toronto, Ontario and Southern Ontario, Canada. He was President of the Ontario Association of Architects, and president of the Royal Architectural Institute of Canada. He was an accomplished architect who designed hospitals, commercial and institutional buildings, residential buildings. Somerville designed the original McMaster University buildings in Hamilton, Ontario and the Rainbow Tower complex in Niagara Falls. He also designed several monuments, including the Clifton Gate Pioneer Memorial Arch in Niagara Falls and the Henley Bridge and Queen Elizabeth Way Monument for the new Queen Elizabeth Way superhighway built in the late 1930s and early 1940s.