Randall Laureat Cross (born April 25, 1954) is an American football analyst and former player. He was a right guard and center in the National Football League (NFL). He played college football for the UCLA Bruins and was inducted into the College Football Hall of Fame in 2011. [1]

Cross was born in Brooklyn, New York, and attended Crespi Carmelite High School in Encino, California. He was renowned as a high school shot put champion in the Southern California CIF from 1970–72, when he was named CIF California State Meet champion in the event, defeating future world record holder Terry Albritton and future WWF wrestling star Jim Neidhart, both from Newport Harbor High School, in the process. [2]

At University of California, Los Angeles (UCLA), Cross was an All-America selection with the Bruins. As a senior, he helped lead his team to the 1976 Rose Bowl championship over top-ranked Ohio State. Cross began his career as a Center, but was moved to Right Guard for his junior year before playing both Guard and Center as senior on a rare rotating nine man offensive line. [5]

On this rotating line Cross started at RG on the 1st unit and then moved to Center when the next group hit the field. He was named First-team All-America in 1975. He was also a First-team All-Conference selection in 1975 In his career, he was a starter in 28 of 34 career games including his final 23. Randy Cross (and many other UCLA linemen) also played collegiate rugby for the school. Randy was inducted into the College Football Hall of Fame in 2010. [6]

In 1976, Cross was selected in the second round of the NFL Draft by the San Francisco 49ers. His 13-year career, entirely with the 49ers, included three Pro Bowl selections and three Super Bowl championships (SB XVI, XIX, and XXIII). Cross's last game as a player was Super Bowl XXIII in early 1989.

He played center from 1976–78 then guard from 1979–86 before finishing his career at center in the 1987 and 1988 seasons. Upon his retirement after Super Bowl XXIII, Randy joined the Miller Lite All Star's cast making a series of popular commercials for the brewing giant.

From 1989 to 1993, Cross was a member of the CBS Sports team that covered the NFC playoffs and Super Bowl XXVI. In addition, he served as an analyst for CBS Radio Sports' coverage of Super Bowl XXIV, filling in for Hank Stram when the latter was stricken with laryngitis and had to leave the broadcast in the third quarter of the game. [7]

He also co-hosts shows on the Sirius NFL Radio. In 2009, he became the color analyst for US Naval Academy home games on CBS College Sports TV. He is the former lead color commentator for New England Patriots pre-season games, from 1995 to 2012, alongside Don Criqui. Randy was a co-host of the midday show "Rick and Randy" with Rick Kamla on WZGC, a CBS radio station in Atlanta, Georgia, before being released from the station.

Cross lives in Alpharetta, Georgia, with his wife, Patrice Cross, and their three children. Elder daughter Kelly graduated from University of Georgia and currently works for Levick Strategic Communications in Washington, D.C. She is married and has two daughters. Younger daughter Crystal recently graduated from Auburn University with a degree in BioMedical Science. His son, Brendan Cross, a graduate of Chattahoochee High School in Johns Creek, Georgia, played football for UCLA after transferring from Wake Forest University. [8]

Lynn Curtis Swann is an American former football player, broadcaster, politician, and athletic director, best known for his association with the University of Southern California and the Pittsburgh Steelers. He served as the President's Council on Fitness, Sports, and Nutrition from 2002 to 2005. In 2006, he was the Republican nominee for Governor of Pennsylvania. 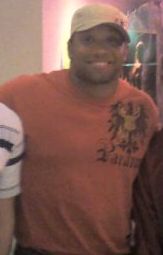 Jamal Sharif Anderson is a former American football running back of the National Football League. He was drafted by the Atlanta Falcons in the seventh round of the 1994 NFL Draft. He played high school football at El Camino Real High School, where he was named to the CIF Los Angeles City Section 4-A All-City first team in 1989. He went on to play college football at Moorpark College for the Moorpark College Raiders before playing at Utah. 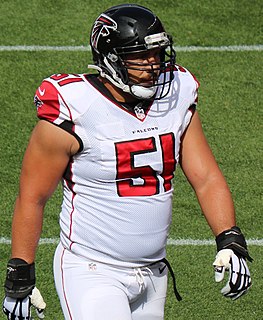 Javon Alexander Mack is an American football center for the San Francisco 49ers of the National Football League (NFL). He played college football for the University of California, and was drafted by the Cleveland Browns 21st overall in the 2009 NFL Draft.

Crespi Carmelite High School, called Crespi, is a private, Catholic, four-year college preparatory high school located in Encino in the San Fernando Valley of Los Angeles, in the U.S. state of California. It is part of the Roman Catholic Archdiocese of Los Angeles. The school was named for Friar Juan Crespí, and was founded in 1959 by the Carmelite religious order, and has been run by the Carmelites since that time. 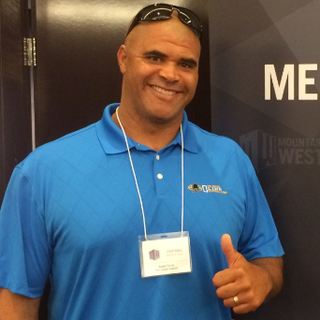 Michael Andrew Seidman is a former American football tight end. He was a 1998 USA Today high school football first-team All-American. He played college football at UCLA, where he was All-Pac-10 First Team, and set a UCLA record for most receiving yards in a season by a tight end. He was drafted by the Carolina Panthers in the third round of the 2003 NFL Draft. His NFL career was cut short by two ACL knee injuries.

Shaun LeJon Williams is a former American football safety, most recently for the Carolina Panthers, of the National Football League.

Terrence Michael Donahue was an American football coach and executive. He served as the head coach at the University of California, Los Angeles (UCLA) from 1976 to 1995, compiling a record of 151–74–8. His 151 wins are the most in UCLA Bruins history, and his 98 wins in the Pac-10 Conference—now known as the Pac-12 Conference—remain the most in the conference's history. Donahue's Bruins won five Pac-10 titles and appeared in four Rose Bowls, winning three. He became the first head coach to win a bowl game in seven consecutive seasons.

Lenny Vandermade is an American football coach and former player. He currently serves as an Offensive Analyst at the University of Southern California. 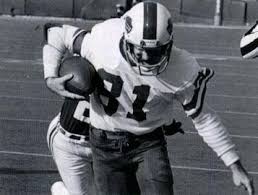 Robert Donald Chandler was an American professional football player who was a wide receiver in the National Football League for twelve seasons. 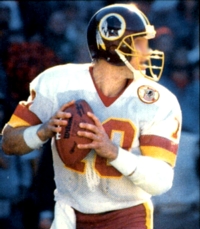 Jay Brian Schroeder is a former professional American football quarterback. He played college football at UCLA, after which he was selected in the third round of the 1984 NFL draft by the Washington Redskins where he played for three seasons. He then played for the Los Angeles Raiders for five seasons and spent one season each with the Cincinnati Bengals and Arizona Cardinals.

Ronald Dwayne Pitts is a former professional American football player and current sportscaster. He played cornerback in the National Football League for the Buffalo Bills and Green Bay Packers, and played college football at UCLA.

Chris Galippo is a former American football linebacker. He played for the University of Southern California. Galippo became the first defensive player to ever win the Pete Dawkins Trophy for being selected as the U.S. Army All-American Bowl's most valuable player. He was signed as an undrafted free agent by the Indianapolis Colts in 2012.

Keith Eck is a former offensive lineman who played one season for the New York Giants of the National Football League. He played college football at UCLA.

Russell Lamar White is an American former professional football player who was a running back in the National Football League (NFL) for a single season in 1993. White played college football for the California Golden Bears, and was recognized as an All-American. Thereafter, he played professionally for the NFL's Los Angeles Rams.

Harry Edward Welch Jr. is a retired American football coach who is considered one of the most successful coaches in California prep football history. In a 42-year coaching career, 25 of which were as a head coach, Welch averaged over 10 wins per season and won nine California Interscholastic Federation – Southern Section (CIF-SS) Championships and three state championships. He also coached 17 CIF-SS Divisional Players of the Year in his career.