The Rockwell scale is a hardness scale based on indentation hardness of a material. The Rockwell test measuring the depth of penetration of an indenter under a large load (major load) compared to the penetration made by a preload (minor load). [1] There are different scales, denoted by a single letter, that use different loads or indenters. The result is a dimensionless number noted as HRA, HRB, HRC, etc., where the last letter is the respective Rockwell scale (see below). When testing metals, indentation hardness correlates linearly with tensile strength. [2]

The differential depth hardness measurement was conceived in 1908 by a Viennese professor Paul Ludwik in his book Die Kegelprobe (crudely, "the cone test"). [3] The differential-depth method subtracted out the errors associated with the mechanical imperfections of the system, such as backlash and surface imperfections. The Brinell hardness test, invented in Sweden, was developed earlier – in 1900 – but it was slow, not useful on fully hardened steel, and left too large an impression to be considered nondestructive.

Hugh M. Rockwell (1890–1957) and Stanley P. Rockwell (1886–1940) from Connecticut in the United States co-invented the "Rockwell hardness tester," a differential-depth machine. They applied for a patent on July 15, 1914. [4] The requirement for this tester was to quickly determine the effects of heat treatment on steel bearing races. The application was subsequently approved on February 11, 1919, and holds U.S. Patent 1,294,171 . At the time of invention, both Hugh and Stanley Rockwell worked for the New Departure Manufacturing Co. of Bristol, CT. [5] New Departure was a major ball bearing manufacturer which in 1916 became part of United Motors and, shortly thereafter, General Motors Corp.

After leaving the Connecticut company, Stanley Rockwell, then in Syracuse, NY, applied for an improvement to the original invention on September 11, 1919, which was approved on November 18, 1924. The new tester holds U.S. Patent 1,516,207 . [6] [7] Rockwell moved to West Hartford, CT, and made an additional improvement in 1921. [7] Stanley collaborated with instrument manufacturer Charles H. Wilson of the Wilson-Mauelen Company in 1920 to commercialize his invention and develop standardized testing machines. [8] Stanley started a heat-treating firm circa 1923, the Stanley P. Rockwell Company, which still exists in Hartford, CT. The later-named Wilson Mechanical Instrument Company has changed ownership over the years, and was acquired by Instron Corp. in 1993. [9]

The determination of the Rockwell hardness of a material involves the application of a minor load followed by a major load. The minor load establishes the zero position. The major load is applied, then removed while still maintaining the minor load. The depth of penetration from the zero datum is measured from a dial, on which a harder material gives a lower measure. That is, the penetration depth and hardness are inversely proportional. The chief advantage of Rockwell hardness is its ability to display hardness values directly, thus obviating tedious calculations involved in other hardness measurement techniques.

The equation for Rockwell Hardness is

, where d is the depth (from the zero load point), and N and s are scale factors that depend on the scale of the test being used (see following section).

It is typically used in engineering and metallurgy. Its commercial popularity arises from its speed, reliability, robustness, resolution and small area of indentation.

In order to get a reliable reading the thickness of the test-piece should be at least 10 times the depth of the indentation. [13] Also, readings should be taken from a flat perpendicular surface, because convex surfaces give lower readings. A correction factor can be used if the hardness of a convex surface is to be measured. [14]

There are several alternative scales, the most commonly used being the "B" and "C" scales. Both express hardness as an arbitrary dimensionless number.

The B and C scales overlap, such that readings below HRC 20 and those above HRB 100, generally considered unreliable, need not be taken or specified.

Several other scales, including the extensive A-scale, are used for specialized applications. There are special scales for measuring case-hardened specimens.

The Brinell scale characterizes the indentation hardness of materials through the scale of penetration of an indenter, loaded on a material test-piece. It is one of several definitions of hardness in materials science.

The Vickers hardness test was developed in 1921 by Robert L. Smith and George E. Sandland at Vickers Ltd as an alternative to the Brinell method to measure the hardness of materials. The Vickers test is often easier to use than other hardness tests since the required calculations are independent of the size of the indenter, and the indenter can be used for all materials irrespective of hardness. The basic principle, as with all common measures of hardness, is to observe a material's ability to resist plastic deformation from a standard source. The Vickers test can be used for all metals and has one of the widest scales among hardness tests. The unit of hardness given by the test is known as the Vickers Pyramid Number (HV) or Diamond Pyramid Hardness (DPH). The hardness number can be converted into units of pascals, but should not be confused with pressure, which uses the same units. The hardness number is determined by the load over the surface area of the indentation and not the area normal to the force, and is therefore not pressure.

Indentation hardness tests are used in mechanical engineering to determine the hardness of a material to deformation. Several such tests exist, wherein the examined material is indented until an impression is formed; these tests can be performed on a macroscopic or microscopic scale.

The Knoop hardness test is a microhardness test – a test for mechanical hardness used particularly for very brittle materials or thin sheets, where only a small indentation may be made for testing purposes. A pyramidal diamond point is pressed into the polished surface of the test material with a known load, for a specified dwell time, and the resulting indentation is measured using a microscope. The geometry of this indenter is an extended pyramid with the length to width ratio being 7:1 and respective face angles are 172 degrees for the long edge and 130 degrees for the short edge. The depth of the indentation can be approximated as 1/30 of the long dimension. The Knoop hardness HK or KHN is then given by the formula:

The Shore durometer is a device for measuring the hardness of a material, typically of polymers, elastomers, and rubbers.

A variety of hardness-testing methods are available, including the Vickers, Brinell, Rockwell, Meyer and Leeb tests. Although it is impossible in many cases to give an exact conversion, it is possible to give an approximate material-specific comparison table for steels. 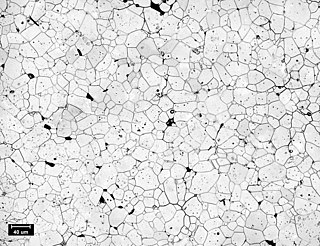 Ceramography is the art and science of preparation, examination and evaluation of ceramic microstructures. Ceramography can be thought of as the metallography of ceramics. The microstructure is the structure level of approximately 0.1 to 100 µm, between the minimum wavelength of visible light and the resolution limit of the naked eye. The microstructure includes most grains, secondary phases, grain boundaries, pores, micro-cracks and hardness microindentions. Most bulk mechanical, optical, thermal, electrical and magnetic properties are significantly affected by the microstructure. The fabrication method and process conditions are generally indicated by the microstructure. The root cause of many ceramic failures is evident in the microstructure. Ceramography is part of the broader field of materialography, which includes all the microscopic techniques of material analysis, such as metallography, petrography and plastography. Ceramography is usually reserved for high-performance ceramics for industrial applications, such as 85–99.9% alumina (Al2O3) in Fig. 1, zirconia (ZrO2), silicon carbide (SiC), silicon nitride (Si3N4), and ceramic-matrix composites. It is seldom used on whiteware ceramics such as sanitaryware, wall tiles and dishware.

The Barcol hardness test characterizes the indentation hardness of materials through the depth of penetration of an indentor, loaded on a material sample and compared to the penetration in a reference material. The method is most often used for composite materials such as reinforced thermosetting resins or to determine how much a resin or plastic has cured. The test complements the measurement of glass transition temperature, as an indirect measure of the degree of cure of a composite. It is inexpensive and quick, and provides information on the cure throughout a part.

Brinelling is the permanent indentation of a hard surface. It is named after the Brinell scale of hardness, in which a small ball is pushed against a hard surface at a preset level of force, and the depth and diameter of the mark indicates the Brinell hardness of the surface. Brinelling is permanent plastic deformation of a surface, and usually occurs while two surfaces in contact are stationary and the material yield strength has been exceeded. The brinelling is undesirable, as the parts often mate with other parts in very close proximity. The very small indentations can quickly lead to improper operation, such as chattering or excess vibration, which in turn can accelerate other forms of wear, such as spalling and ultimately, failure of the bearing. 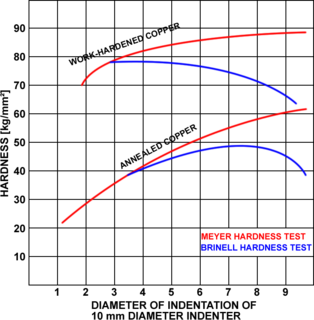 Meyer's law is an empirical relation between the size of a hardness test indentation and the load required to leave the indentation. The formula was devised by Eugene Meyer of the Materials Testing Laboratory at the Imperial School of Technology, Charlottenburg, Germany, circa 1908. 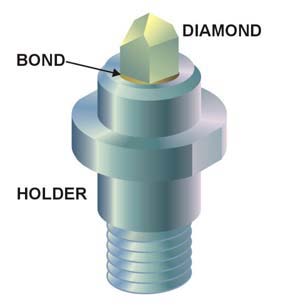 The Leeb Rebound Hardness Test (LRHT) invented by Swiss company Proceq SA is one of the four most used methods for testing metal hardness. This portable method is mainly used for testing sufficiently large workpieces.

The Korsunsky work-of-indentation approach is a method of extracting a value of hardness for a small volume of material from indentation test data. 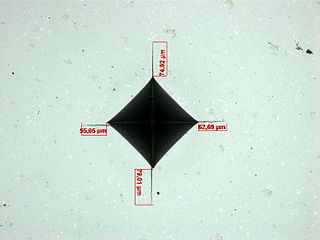 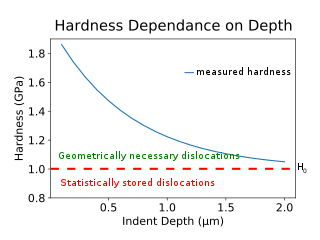 The indentation size effect (ISE) is the observation that hardness tends to increase as the indent size decreases at small scales. When an indent is created during material testing, the hardness of the material is not constant. At the small scale, materials will actually be harder than at the macro-scale. For the conventional indentation size effect, the smaller the indentation, the larger the difference in hardness. The effect has been seen through nanoindentation and microindentation measurements at varying depths. Dislocations increase material hardness by increasing flow stress through dislocation blocking mechanisms. Materials contain statistically stored dislocations (SSD) which are created by homogeneous strain and are dependent upon the material and processing conditions. Geometrically necessary dislocations (GND) on the other hand are formed, in addition to the dislocations statistically present, to maintain continuity within the material.