In 1983 a feasibility study was undertaken by All Nippon Airways to investigate the setting up of a Tongan airline. It was planned for Friendly Island Airways to begin operations in October 1974, with technical and managerial assistance provided by the Japanese airline, and for the airline to operate a surplus ANA Boeing 737-200. The plan was dropped in favour of Tongan participation in Air Nauru, which was expected to take delivery of a third Fokker F28 and was also expected to extend the Nauru-Apia route to Tonga. At the time, flights between Apia and Tonga were operated exclusively by Polynesian Airlines. [1]

In 1985, King of Tonga Taufa'ahau Tupou IV visited the British Aerospace factory in Woodford, leading to hopes with the manufacturer that Tonga would purchase the British Aerospace ATP. [2] However, the government of Tonga and the Tonga Commodities Board purchased a CASA 212 and Britten Norman Islander with which domestic flights could be started. [3] Flights to Pago Pago (American Samoa) and Apia (Western Samoa) were begun with the CASA in 1986. As airfields in Vavaʻu, Haʻapai, ʻEua and the Niuas were upgraded, the airline upgraded the inter-island aircraft. In 1989 the airline leased two de Havilland Canada DHC-6 Twin Otters to replace the CASA and Islander, and after the initial lease period, purchased the aircraft from the lessor, Guinness Peat Aviation. In June 1991, the name was changed from Friendly Island Airways to Royal Tongan Airlines, and international services were begun with a Boeing 737-200 which was leased from Solomon Airlines from Tongatapu to Auckland, New Zealand. The airline was considering acquiring a Douglas DC-8 in order to operate flights to Australia, New Zealand and Honolulu, [4] however this didn't eventuate and in 1994 the airline entered into a codeshare agreement with Polynesian Airlines on routes to Sydney, Honolulu and Los Angeles. [3]

In June 1995, an agreement was signed with Air Pacific, which saw the lease-sharing of a Boeing 737-300 operated on Royal Tongan routes. The airline also gained approval from the Australian government to carry passengers on its Sydney-Auckland-Tonga route. [5] In 1996 the airline opened an office in Honolulu, and began codesharing on Air New Zealand flights from Tongatapu to the Hawaiian capital. [6] On 28 October 1997, a codeshare agreement with Polynesian Airlines was begun. The agreement signed in early October 1997, saw Polynesian Airlines extending its Apia-Wellington-Melbourne flights to operate Apia-Tonga-Wellington-Melbourne. The agreement was a continuation of efforts by airlines in the South Pacific to pool their limited resources to maximise their services. [7]

Direct flights between Tongatapu and Sydney were announced in April 1999 as part of a Tongan initiative to increase tourist numbers from Australia. The once-weekly flights, the first by a Tongan airline to Australia, were operated by a chartered Air Pacific Boeing 737. [8]

A delegation from the government of Niue travelled to Tonga to try to persuade Royal Tongan to continue flying to Niue from Tonga past 28 October 2002; that date on which the flights were to cease, and Polynesian Airlines would begin jet service to Auckland. Royal Tongan told the Niuean government that it could no longer justify the service. [9]

In 2002, the airline leased a Boeing 757 from Royal Brunei Airlines in order to restart international flights. The deal saw the aircraft being leased for a period of five years, initially as a wet lease later to be changed to a dry lease. [10] Prince Tuʻipelehake, and a majority of Tongan MPs, opposed the government giving Royal Tongan financial support with public funds due to the high levels of debt the airline was already in. [11]

Royal Tongan service of the 757, nicknamed 'Ikale Tahi, was inaugurated at Fuaʻamotu International Airport on 23 November 2002, [12] with thrice-weekly flights from Tongatapu to Auckland, with a once-a-week extension to Sydney. [13] In 2003 it obtained its own air operator's certificate with a view to launching flights to Honolulu. [13] On 19 December, the airline was due to launch a once-weekly direct flight from Tongatapu to Honolulu, marking the entry of the airline in the American market. [14]

The Director of the Tongan Human Rights and Democracy Movement claimed the restructuring of the airline suffered from a lack of transparency. Lopeti Senituli noted that Tongan Prime Minister Prince ʻUlukālala Lavaka Ata wrote to the board of Royal Tongan Airline and instructed them to resign. At the same time, he noted that Shoreline, a company owned by the prince, had expressed an interest in taking over the airline. [15]

The airline stopped selling international flights on 23 April 2004, and announced that the last international flight would leave Tongatapu for Auckland the following day, whereby the Boeing 757 was repossessed for non-payment and returned to Royal Brunei Airlines. Whilst airline management provided no reasons for the cessation of international flights, it was believed to be linked to the funding crisis which was being experienced by the state-owned airline. [13] [22] After the closure, Tonga was reliant on Air New Zealand, Air Pacific, Air Fiji and Polynesian Airlines for international air services. [23] The cessation of international flights also had the side effect of stranding mail being sent to Tonga in Auckland, up to a month afterwards, due to limited cargo space being available on the Air New Zealand flights to the nation, and in late May it was reported that the nation had not received mail for a week. [24]

Akilisi Pohiva, a pro-democracy member of Tonga's parliament blamed King Taufa'ahau Tupou IV for the financial crisis of the airline, and called on the king to use his own funds to bail Royal Tongan out of its financial woes. [25] He noted that the Tupou had issued a royal decree for the 757 project to proceed, despite opposition from the cabinet and parliament, and claimed that the monarchy is not accountable to the public. [26]

On 18 May 2004, the airline ceased all operations with the remaining one hundred employees losing their jobs, and the islands of Tonga being left without domestic air service. [27] The closure was forced as the airline's only airworthy aircraft, the Shorts 360, broke down and the airline had no funds with which to repair it. Airline administration was hoping that the government would bail it out, but this did not eventuate. [27]

In discussing the sending of Australian and New Zealand specialists to Tonga, to help the government wind up the airline, Phil Goff, the New Zealand Minister of Foreign Affairs stated "lessons can be learned from how and why the RTA collapsed." [28] The Tongan government confirmed that it had a financial commitment in the airline to the value of 14 million Tongan paʻanga, and had pumped some 20 million paʻanga into the airline since its inception in 1985. [28]

In July 2004 PricewaterhouseCoopers found that the only substantial remaining assets of the company were a hangar and the two aircraft. It recommended that the aircraft be repaired and sold. [29] By December 2004, it was reported that creditors had lodged claims of US$8.5 million from the liquidators, but had recovered only US$1.13 million from the sale of assets. PricewaterCoopers also noted that only 106 of 206 former employees of the airline had thus far lodged claims. [30] The Twin Otter was sold in January 2005 for US$850,000, and the sale of assets from the airline's offices in Nukuʻalofa and abroad netted US$71,000 and US$8,000 respectively. [31]

In the absence of domestic flights in Tonga, by June 2004 Air Waves of Vava'u and Fly Niu Airlines had begun operations on some of the former Royal Tongan routes. [32]

Tonga, officially named the Kingdom of Tonga, is a Polynesian sovereign state and archipelago comprising 169 islands, of which 36 are inhabited. The total surface area is about 750 square kilometres (290 sq mi) scattered over 700,000 square kilometres (270,000 sq mi) of the southern Pacific Ocean. The state has a population of 100,651 people, of whom 70% reside on the main island of Tongatapu. 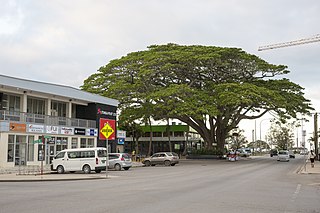 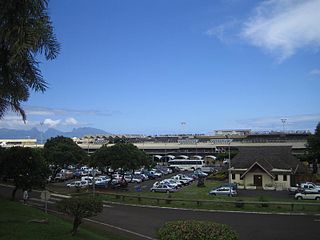 Nauru Air Corporation, trading as Nauru Airlines is the flag carrier airline of the Republic of Nauru. It operates scheduled international services to other Pacific islands and Australia. Its main base is Nauru International Airport. Its head office is on the property of Nauru International Airport, Yaren District and its operations office is in Brisbane in the Australian state of Queensland. In August 2014, the airline changed its name from Our Airline to Nauru Airlines.

Fiji Airways, is the flag carrier airline of Fiji and operates international services from its hubs in Fiji to 13 countries and 23 cities including Australia, New Zealand, Samoa, Tonga, Tuvalu, Kiribati, Vanuatu and Solomon Islands (Oceania), the United States, Hong Kong and Singapore. It has an extended network of 108 international destinations through its codeshare partners. The airline resumed direct flights to Narita, Tokyo on 3 July 2018. The Fiji Airways Group brings in 64 percent of all visitors who fly to Fiji, employs over 1000 employees, and earns revenues of over FJD$815 million (US$390m).

Faleolo International Airport is an airport located 40 kilometres (25 mi) west of Apia, the capital of Samoa. Until 1984, Faleolo could not accommodate jets larger than a Boeing 737. Services to the United States, Australia, or New Zealand, could only land at Pago Pago International Airport in American Samoa. Since the airport's expansion most international traffic now uses Faleolo.