Schlittschuh Club Bern ( Ice-skating Club Bern in English) is an ice hockey team based in Bern, Switzerland. They play in the National League (NL), the top tier of the Swiss hockey league system. For the 18th year in a row, the club is the most attended ice hockey team in Europe for the 2018–19 regular season, averaging 16,290 spectators. [1]

They are traditional rivals with HC Fribourg-Gottéron, EHC Biel, and the SCL Tigers.

The ice hockey section of the Bern Sports Club, which was established on 3 November 1930, officially began playing on 1 January 1931.

Today, SC Bern is a highly popular team and regularly fills its home stadium, the PostFinance Arena, one of the largest ice hockey stadiums in Europe. In 2006, they set a new record among European clubs for average attendance, with an average of 15,994 in 22 home games. [2] They have won the Swiss Championship thirteen times, with the most famous victory coming in 1989 over HC Lugano

After a disappointing run in the 2006 playoffs, the club replaced head coach Alpo Suhonen with John Van Boxmeer and general manager Roberto Triulzi with Sven Leuenberger. [3] Leuenberger had previously played thirteen seasons of defence with the club, totaling 67 goals, 145 assists, and four national championships. His jersey number 16 is one of many that has been retired by SC Bern.

On 30 September 2008, SC Bern faced off against the National Hockey League's New York Rangers to celebrate one hundred years of ice hockey in Switzerland. Forty-nine years since the Rangers' last visit to Switzerland, the blueshirts beat the home team 8–1 in front of a sellout crowd. Despite the slanted score, SC Bern played a close game with a 2–0 score at the end of the second. Former Phoenix Coyotes' Canadian-born defenceman Travis Roche scored SC Bern's goal early in the third period, bringing the game to 2–1. SC Bern only allowed two even-strength goals, but could not withstand the Rangers' potent power play in the final frame (6-for-9). "We played for our pride tonight," said center Sébastien Bordeleau after the exhibition game. Christian Dubé wore the captain's "C" because Ivo Rüthemann was injured.

During the 2013–14 season, Guy Boucher signed a contract as coach of the SC Bern for the current year and two more seasons. He has since been relieved from his duties, moving on to coach the Ottawa Senators, being replaced by former assistant and SC Bern player Lars Leuenberger, who guided the team to the championship in 2016. Leuenberger was then replaced by former Finnish national team coach Kari Jalonen prior to the 2016–17 season. Jalonen went on to win the NL title in his first year at the helm of the team.

On 1 October 2018, SC Bern played a friendly game against the New Jersey Devils of the National Hockey League (NHL), which featured their former player Nico Hischier who in 2017 became the first Swiss player to be drafted first overall in an NHL Entry Draft. [4] [5]

On January 28, 2020, Jalonen was relieved of his duties following terrible results. Hans Kossmann stepped in to replace him as head coach for the remainder of the 2019/20 season.

The National League (NL) is a professional ice hockey league in Switzerland and is the top tier of the Swiss league system. Prior to the 2017–18 season, the league was known as National League A. During the 2018–19 season, the league had an average of 6,949 spectators per game which is the highest among European leagues. The capital city's club SC Bern has been ranked first of all European clubs for 18 seasons and had an average attendance of 16,290 after the regular season. The ZSC Lions are another club in the top ten of European ice hockey attendance, ranking seventh with 9,694 spectators.

The Finnish men's national ice hockey team, or Leijonat / Lejonen, as it is called in Finland, is governed by the Finnish Ice Hockey Association. Finland is one of the most successful national ice hockey teams in the world and a member of the so-called "Big Six", the unofficial group of the six strongest men's ice hockey nations, along with Canada, United States, the Czech Republic, Russia and Sweden.

Sylvain Jean Lefebvre is a Canadian former ice hockey defenceman who played on five National Hockey League teams from 1989 to 2003. In 2012, he became the head coach of the Hamilton Bulldogs in the American Hockey League, the Montreal Canadiens' AHL affiliate. He remained with the Canadiens' owned AHL franchise as head coach when it moved to become the St. John's IceCaps in 2015 and the Laval Rocket in 2017. He won the Stanley Cup with the Colorado Avalanche in 1996.

Derek Leonard Roy is a Canadian professional ice hockey centre who is currently playing with EHC München of the Deutsche Eishockey Liga (DEL). Roy has played in the National Hockey League (NHL) with the Buffalo Sabres, Dallas Stars, Vancouver Canucks, St. Louis Blues, Nashville Predators and the Edmonton Oilers. He was originally drafted in the second round, 32nd overall, by the Buffalo Sabres in the 2001 NHL Entry Draft. 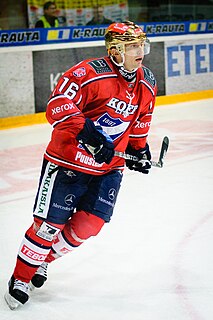 John Tavares is a Canadian professional ice hockey centre and captain of the Toronto Maple Leafs of the National Hockey League (NHL). He was selected first overall by the New York Islanders in the 2009 NHL Entry Draft, where he spent nine seasons and served as captain for five seasons. 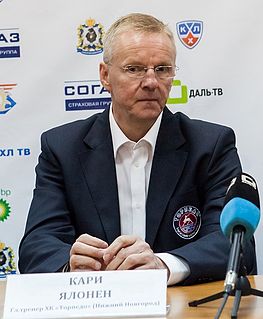 Andrew MacDonald is a Canadian professional ice hockey defenceman who is currently an unrestricted free agent. He most recently played with SC Bern in the National League (NL). He has previously played in the National Hockey League (NHL) for the New York Islanders and the Philadelphia Flyers, serving as an alternate captain for both franchises.

Trevor Smith is a Canadian former professional ice hockey centre. He most recently played with the San Antonio Rampage in the American Hockey League (AHL).

Roman Josi is a Swiss professional ice hockey defenceman and captain of the Nashville Predators of the National Hockey League (NHL). Drafted 38th overall by the Predators in the 2008 NHL Entry Draft, Josi is regarded as one of the most complete defencemen in NHL history. In 2019–20, Josi became the first Swiss player to win the James Norris Memorial Trophy as the league's best defenceman; also the first player in Predators' franchise history. In 2021 he surpassed Mark Streit as the most productive Swiss NHL player.

Guy Boucher is a Canadian professional ice hockey coach. Boucher is the former head coach of the Tampa Bay Lightning and Ottawa Senators of the National Hockey League (NHL). He was also the head coach of SC Bern in the 2014–15 season. He previously coached in the Quebec Major Junior Hockey League (QMJHL). He has coached various Canadian international teams. He's currently involved in a French Canadian show, called On Jase. The show is on the RDS channel and it's hosted by Martin Lemay.

Justin Matthew Krueger is a German-Canadian professional ice hockey defenceman who is currently playing with Lausanne HC of the National League (NL). He previously played for SC Bern and for the Charlotte Checkers, the AHL affiliate of the Carolina Hurricanes. He was selected by the Carolina Hurricanes in the 7th round of the 2006 NHL Entry Draft.

Mark Robert Arcobello is an American professional ice hockey right winger who is currently playing with HC Lugano of the National League (NL). 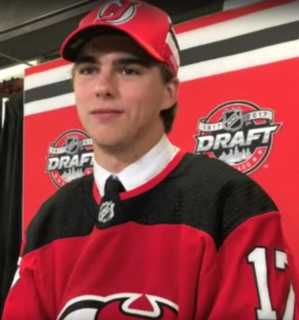 Nico Hischier is a Swiss professional ice hockey forward and captain for the New Jersey Devils of the National Hockey League (NHL). Hischier made his professional debut in his native Switzerland in 2015, spending time both in the top-tier National League A (NLA) and the second-tier National League B. He moved to North America for the 2016–17 season to play major junior hockey for the Halifax Mooseheads of the Quebec Major Junior Hockey League (QMJHL) in hopes of furthering his hockey career; in his first season in the QMJHL, he was named rookie of the year, along with the award for best rookie in the Canadian Hockey League (CHL), the governing body for major junior hockey in Canada. Internationally Hischier has represented Switzerland at several junior tournaments, including two World Junior Championships. Regarded as a strong two-way forward and a top prospect for the 2017 NHL Entry Draft, Hischier was selected first overall by the Devils, the first time a Swiss player was selected first overall, and made his NHL debut in 2017. He was named captain of the Devils in 2021.