SV Ried is an Austrian association football club from Ried im Innkreis, Upper Austria. The team plays its home matches at Josko Arena, a stadium with a capacity of 7,680. After being relegated from Bundesliga in the 2016–17 season, SV Ried have returned to the top tier 2020-21 Austrian Football Bundesliga after being crowned champions of 2019-20 Austrian Football Second League. For sponsorship reasons, the name of the club is currently SV Guntamatic Ried.

The club formed on 5 May 1912 as Sportvereinigung Ried, and played in the regional leagues of Upper Austria until 1991, when they ascended to the national leagues for the first time. SV Ried first achieved promotion to the highest level of Austrian football in 1995.

SV Ried gained their first major honour in 1998 when they won the Austrian Cup, beating Sturm Graz 3–1 in the final. In 2003, Ried were relegated, ending an eight-year spell in the top division. Two seasons later, Ried regained Bundesliga status, becoming champions of the Erste Liga on 23 May 2005 following a 3–2 victory over Kapfenberg. In the following season (2005–06) Ried achieved their highest league finish so far, fourth, in the Bundesliga. The year after they managed to improve once more finishing second and becoming vice-champion. After the first third of the season, the team seemed to battle against relegation and was stuck in the last place for five game weeks. The club management however kept trusting in Helmut Kraft's coaching abilities, which would turn out to be the right decision after all. Twelve matches without a loss in the second third of the season and five wins out of the last five matches from match weeks 32–36 guaranteed the club's highest league finish of second place and a spot in the first qualifying round of the UEFA Cup.

Grazer AK, founded 18 August 1902 as Grazer Athletiksport Klub, is an Austrian sports club, from the city of Graz in the federal state of Styria (Steiermark). The football section used to be one of the most popular Austrian clubs, mostly successful in the decade 1995–2005. The other sections are basketball, diving and tennis, which however all act as separate legal entities. The "GAK" football section was folded during the 2012–13 Regionalliga Mitte Season in Autumn 2012. It has since been revived and returned to Austrian Second League in 2019.

Fußballklub Austria Wien AG (German pronunciation: [ˈaʊ̯stri̯aː ˈviːn]; known in English as Austria Vienna, and usually shortened to Austria in German-speaking countries, is an Austrian association football club from the capital city of Vienna. It has won the most trophies of any Austrian club from the top flight, with 24 Austrian Bundesliga titles and 27 cup titles, although its rival SK Rapid Wien holds the record for most national championships with 32. Alongside Rapid, Austria is one of only two teams that have never been relegated from the Austrian top flight. With 27 victories in the Austrian Cup and six in the Austrian Supercup, Austria Wien is also the most successful club in each of those tournaments. The club reached the UEFA Cup Winners' Cup final in 1978, and the semi-finals of the European Cup the season after. The club plays at the Franz Horr Stadium, known as the Generali Arena since a 2010 naming rights deal with an Italian insurance company. Franz "Franky" Schiemer is a former Austrian footballer who played as a defender and current assistant coach of Leeds United.

The Austrian Football Bundesliga 2008–09 was the 97th season of top-tier football in Austria. The competition is officially called tipp3-Bundesliga powered by T-Mobile, named after the Austrian betting company tipp3 and the Austrian branch of German mobile phone company T-Mobile. The season started on 8 July 2008 with Sturm Graz beating defending champions Rapid Vienna by 3–1. The 36th and last round of matches took place on 31 May 2009.

Atdhe Nuhiu is a Kosovan professional footballer who plays as a forward for Austrian club SC Rheindorf Altach.

TSV Hartberg, known as TSV Egger Glass Hartberg for sponsorship purposes, is an Austrian association football club based in Hartberg, founded in 1946, which is currently playing in the Austrian Bundesliga.

Wolfsberger AC, commonly referred to as Wolfsberg or simply WAC, is an Austrian association football club from Wolfsberg, Carinthia, who currently play in the Austrian Bundesliga. Between the 2007–08 and 2011–12 seasons, Wolfsberger AC entered a cooperation with SK St. Andrä, competing under the name WAC/St. Andrä during that period. The team is currently called RZ Pellets WAC for sponsorship reasons. 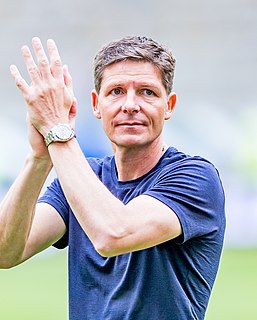 Oliver Glasner is an Austrian professional football coach, currently as a head coach of Eintracht Frankfurt. In his playing career, he played as a defender for Austrian Football Bundesliga side SV Ried.

Herwig Drechsel is an Austrian retired professional association football player who played as a midfielder and current manager.

Gernot Trauner is an Austrian professional footballer who plays as a centre-back for Eredivisie club Feyenoord and the Austria national team.

Julian Baumgartner is an Austrian footballer who plays for the reserve team of SV Ried.

The 2020–21 TSV Hartberg season was the club's 75th season in existence and its third consecutive season in the top flight of Austrian football. In addition to the domestic league, Hartberg participated in this season's editions of the Austrian Cup and the UEFA Europa League. The season covered the period from 5 July 2020 to 30 June 2021.

The 2021–22 season was the 76th season in the existence of TSV Hartberg and the club's fourth consecutive season in the top flight of Austrian football. In addition to the domestic league, TSV Hartberg participated in this season's edition of the Austrian Cup.

The 2021–22 season is the 91st season in the existence of SV Ried and the club's tenth consecutive season in the top flight of Austrian football. In addition to the domestic league, SV Ried are participating in this season's edition of the Austrian Cup.

Christian Heinle is an Austrian football manager and former player who is currently the manager of Ried.

The 2022–23 season is the 111th in the history of SV Ried and their third consecutive season in the top flight. The club are participating in the Austrian Football Bundesliga and the Austrian Cup.