Savard is an unincorporated township in the Canadian province of Ontario, located in the Timiskaming District. It is located immediately west of the municipality of Chamberlain. 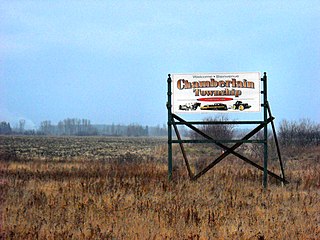 A designated place served by a local services board, Savard had a population of 223 in the Canada 2006 Census.

A designated place (DPL) is a type of community or populated area identified by Statistics Canada for statistical purposes. DPLs are delineated for each decennial census as the statistical counterparts of incorporated places such as cities, towns and villages.

Whitbourne is a town on the Avalon Peninsula in Newfoundland and Labrador, Canada in Division 1.

Serge Aubrey "The Senator" Savard, OC, CQ is a Canadian retired professional ice hockey defenceman, most famously with the Montreal Canadiens of the National Hockey League (NHL). He is the Senior Vice President, Hockey Operations with the Montreal Canadiens. He is also a local businessman in Montreal, and is nicknamed "the Senator." In 2017 Savard was named one of the 100 Greatest NHL Players in history.

Denis Joseph Savard is a Canadian former professional ice hockey player. He played in the National Hockey League (NHL) from 1980 to 1997, and was elected to the Hockey Hall of Fame in 2000. In 2017 Savard was named one of the '100 Greatest NHL Players' in history. He has also served as head coach of the Chicago Blackhawks of the NHL, and now serves as an ambassador for the Blackhawks' organization. Savard was born in Temiscaming, Quebec, but grew up in Montreal.

Chicoutimi—Saguenay was a federal electoral district in Quebec, Canada, that was represented in the House of Commons of Canada from 1867 to 1925.

Harrisburg Area Community College (HACC) is a community college in Harrisburg, Pennsylvania. HACC is accredited by the Commission on Higher Education of the Middle States Association of Colleges and Schools. HACC serves 19,000 degree-seeking students as well as 6,000 students in noncredit programs. The college has more than 90,000 alumni.

The Bay de Verde Peninsula is the largest peninsula that makes up part of the Avalon Peninsula, of the province of Newfoundland and Labrador, Canada. The peninsula separates both Trinity and Conception Bay.

Kavanagh is a hamlet in Alberta, Canada within Leduc County. It is located on Highway 2A between Millet and Leduc, approximately 30 kilometres (19 mi) south of Edmonton. 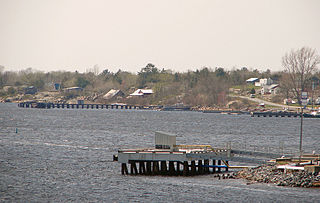 Britt is a community in the Canadian province of Ontario, located in the unincorporated township of Wallbridge in the Parry Sound District.

The Berrys River is a 12.9-mile (20.8 km) long river located in southeastern New Hampshire in the United States. It is a tributary of the Isinglass River, part of the Cocheco River/Piscataqua River watershed leading to the Atlantic Ocean.

Bezirk Neunkirchen is a district of the state of Lower Austria in Austria. It is located at the south of the state. 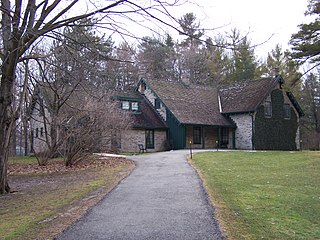 Woodside National Historic Site is the childhood home of former Canadian Prime Minister William Lyon Mackenzie King. King resided there from 1886 to 1893. The house is located in the city of Kitchener, Ontario, Canada. The house was built in 1853. A group of local citizens created the Mackenzie King Woodside Trust to preserve the house from demolition and acquire the property. The house has been restored to reflect the Victorian era. The 11.5-acre (47,000 m2) site includes wooded grounds, gardens, and lawn. A video presentation is shown about the King family and Woodside. Victorian period programs and special events are offered.

Marlboro is a hamlet in west-central Alberta, Canada within Yellowhead County. It is located on the Yellowhead Highway, approximately 25 kilometres (16 mi) west of Edson. Sundance Provincial Park is located northwest of the hamlet.

Heart's Delight-Islington is a town on the south side of Trinity Bay in the Canadian province of Newfoundland and Labrador. The town, located on Newfoundland and Labrador Route 80, was incorporated in 1973 by amalgamating the formerly independent settlements of Heart's Delight and Islington. The Post Office was established in 1954. The first Postmistress was Maggie Chislett.

Zaręby-Grzymały is a village in the administrative district of Gmina Zambrów, within Zambrów County, Podlaskie Voivodeship, in north-eastern Poland. 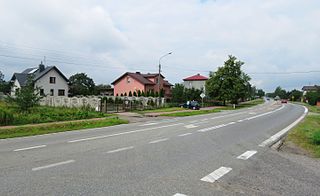 Stare Kozłowice is a village in the administrative district of Gmina Wiskitki, within Żyrardów County, Masovian Voivodeship, in east-central Poland.

Flatbush is a hamlet in northern Alberta, Canada within the Municipal District of Lesser Slave River No. 124. It is located 3 kilometres (1.9 mi) south of Highway 44, approximately 135 kilometres (84 mi) northwest of Edmonton.

Hueyapan (municipality) is a town and municipality in Puebla in south-eastern Mexico.

Division No. 1, Subdivision U is an unorganized subdivision on the Avalon Peninsula in Newfoundland and Labrador, Canada, in Division 1. It contains the unincorporated communities of Admiral's Cove, Bauline East, Bauline South, Burnt Cove, Devils Kitchen, Flat Rock, St. Michaels and Seal Cove.