Savonia (Finnish : Savo, Swedish : Savolax) is a historical province in the east of Finland. It borders Tavastia, Ostrobothnia, and Karelia. Currently, Savonia is divided into two provinces: Northern Savonia and Southern Savonia. The largest cities in Savonia by population are Kuopio, Mikkeli, Savonlinna, Varkaus and Iisalmi.

The province of Savo represents the original homeland of the Savonians, one of the subgroups that later became assimilated to form the Finns. It was the heartland of the east Finnish or Savonian dialects.

Savonia, which had been a part of Sweden from the late-13th century, was separated from Sweden when Finland was ceded to Russia in September 1809.

Traditionally, the Savonian people have often been considered as "sneaky". Recent research has shown that this reputation is largely due to misunderstandings caused by Savonians' traditional lack of social directness. [1]

The arms of Savonia are crowned by a count's coronet, though by Finnish tradition this more resembles a Swedish baronial coronet. Blazon: "Sable, a drawn hand bow in and arrow aimed toward dexter chief, or; bow string, arrowhead and feathered tail, argent." The traditional colors of the province are black and gold.

Uusimaa, is a historical province in the south of Finland. It borders Finland Proper, Tavastia, Savonia, and Karelia. The English translation would be "new land". From the Middle Ages to 1809, most of the present-day Finland was a part of Sweden. Uusimaa (Nyland) was thus included also among the historical Swedish provinces. 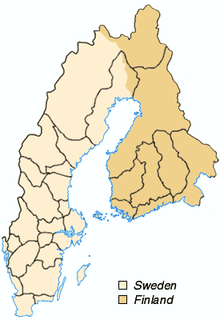 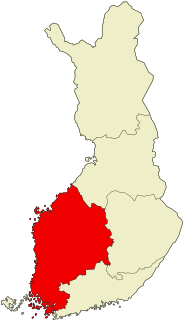 The former Province of Eastern Finland in Finland was divided into three regions, 11 districts and 49 municipalities. 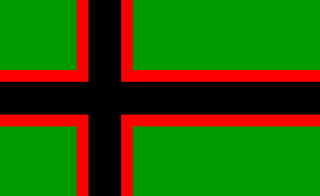 Karelians are an ethnic group who are indigenous to the Northern European historical region of Karelia, which is today split between Finland and Russia. Karelians living in Russian Karelia are considered a distinct ethnic group closely related to Finnish Karelians, who are considered a subset of Finns. This distinction historically arose from Karelia having been fought over and eventually split between Sweden and Novgorod, resulting Karelians being under different cultural spheres.

Karelia is a historical province of Finland which Finland partly ceded to Russia after the Winter War of 1939–40. The Finnish Karelians include the present-day inhabitants of North and South Karelia and the still-surviving evacuees from the ceded territories. Present-day Finnish Karelia has 315,000 inhabitants. The more than 400,000 evacuees from the ceded territories re-settled in various parts of Finland. 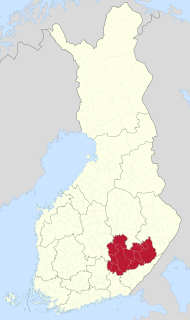 Southern Savonia or, officially, South Savo is a region in the south-east of Finland. It borders the regions of Northern Savonia, North Karelia, South Karelia, Kymenlaakso, Päijät-Häme, and Central Finland. The total area of Southern Savonia is 18,768.33 km2, with a population of 153,738 (2011).

Pieksämäki is a town and municipality of Finland. It is located in the Southern Savonia region, about 75 kilometres (47 mi) north of Mikkeli, 85 kilometres (53 mi) east of Jyväskylä and 95 kilometres (59 mi) south of Kuopio. The town has a population of 17,376 and covers an area of 1,836.22 square kilometres (708.97 sq mi) of which 266.76 km2 (103.00 sq mi) is water. The population density is 11.07 inhabitants per square kilometre (28.7/sq mi). Neighbour municipalities are Hankasalmi, Joroinen, Juva, Kangasniemi, Leppävirta, Mikkeli, Rautalampi and Suonenjoki.

Savonia or Savonian may refer to:

The Savonian dialects are forms of the Finnish language spoken in Savonia and other parts of Eastern Finland. It belongs to the eastern Finnish dialects and it is divided into more specific dialect groups.

Savonians are a subgroup of the Finnish people descending from the inhabitants of historical province of Savonia. Savonians differ from other Finnish clans by their dialect and cultural tradition. Originally they are descendants of the historical Finnish Karelians and the Tavastians. Nowadays the historical homeland of the Savonians is divided between the provinces of Northern Savonia and Southern Savonia. The regional identity of Savonians, like that of the other traditional Finnish clans, is declining. Savonians and Karelians were the first people in Finland to use surnames, beginning during the Middle Ages. These surnames are recognisable for containing the "nen" diminutive.

Forest Finns were Finnish migrants from Savonia and Northern Tavastia in Finland who settled in forest areas of Sweden proper and Norway during the late 16th and early-to-mid-17th centuries, and traditionally pursued slash-and-burn agriculture, a method used for turning forests into farmlands. By the late 18th century, the Forest Finns had become largely assimilated into the Swedish and Norwegian cultures, and their language, a variety of Savonian Finnish, is today extinct, although it survived among a tiny minority until the 20th century.

The Kuopio Province was a province of Finland from 1831 to 1997. The province was named after its capital, city of Kuopio.